Today, dropped the needle and bike was unrideable. Oops. Put the setting back and went out for a dander. 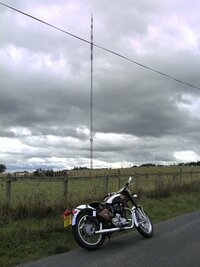 That's the Lindean TV transmitter, one of the tallest man-made structures in the Scottish Borders at about 800' high. Couldn't find a perspective to avoid the telephone cable 'coz it's strung all the way along the side of the road.

But for me, the main thing was the bike behaved, in fact running well. Could be the mixture is close to as good as it's going to get?

Raymond said:
But for me, the main thing was the bike behaved, in fact running well. Could be the mixture is close to as good as it's going to get?
Click to expand...

With the needle back to behaved, how does it do at WOT? If it runs good there and the plug looks decent, I'd start going the other way (raise the needle) until it runs rough again, then drop it back one (or two) slots.

And,...how much choke (long in seconds) does it want on cold start?

Thank you for your interest, Gentlemen. The current set up has the old Mikcarb, with the needle at its highest - clip in lowest slot. I thought that after fitting a free-flowing petrol tap, the mixture was now too rich. Took the carb apart this morning and above the slide was wet with petrol, which seems to confirm that, so I lowered the needle, but the bike did not like that at all so I reversed the change. Obviously, there is no room to move the needle further up so some other change would have to be made - different shape of needle or larger main. But I'm still not convinced that the mixture is not too rich already?

WOT? Have never given the bike full wide open. For one thing, until I've been inside the engine, I don't want to push the speed much past 55-60 mph. The original Indian-made cast pistons have a tendency to come apart at the cast-in cooling slots if asked to sustain a high speed. If the bike still has the original, I will fit a Hitchcocks forged piston, said to eliminate that problem.

So all it gets is occasional fairly big throttle, typically for a few seconds going up a hill. Provided we're going quite fast, seems to respond quite well to a handful. At lower speeds, too much throttle does not seem to give acceleration, the exhaust get louder but the bike feels woolly which is why I think it might be rich?

Starting, if I put the choke/mixture enrichener on and leave the throttle shut, the engine will turn a few times but not keep going. Best way to get her started is to leave the choke off, open the throttle a particular amount - too little does nothing, too much leads to spitting back, but get it right and goes to a fast tick-over. I usually hold that for about a minute, gradually reducing down to slower revs.

I find it difficult to be scientific because I have a tendency to ride around problems. Over-developed mechanical sympathy? So I'll always be playing with a little more/a little less throttle to keep things feeling happy. And when the engine is cold I'm nearly always holding a tiny bit of throttle in case it stalls. I've never been in the habit of winding the tap open in a hurry - on all bikes, I gradually open up and add more as speed picks up.

Hope this answers you questions or at least sheds some light?
Last edited: Monday at 1:02 PM

Well if you seldom wind the throttle all the way open.... I think I'd try one step up on the main. That should allow you to step the needle back down somewhere around mid point.
Then you'll have room to play with it up or down and see where you're at.... too rich or too lean. Or perhaps even just right.

Going to put an order for jets and carb bits and I'll use Hitchcocks. Cheaper buying from India and I've bought few bits from there but for techie bits I'd rather pay more for reliable quality. Sent H's an email asking about needle clips - yes, they stock them. The clip in the Mikarb has been on and off, I'm sure it's getting bent and one of these days it's going to break. Or fly.

But in the meantime just ride. Yesterday, one trip to Kelso and shoved some fuel in, then out to Galashiels, trip to the shops. Came home the long way, needless to say. So about 40-50 miles in total and if I'm picky it feels a bit 'woolly' at times but otherwise running well. Took the plug out and it's a nice pale brown.

The 1940s riding experience, sitting upright in the sprung saddle, just taking one's time, backing off the throttle and selecting the correct line for curves. Find meself laughing out loud at times. But that might just be me.

Not just you Raymond... I too enjoy my old school feel Bullet 500, with sidecar. I try and tell younger rides to ride.. discover the simple pleasures of ..... motorcycling.

Today, went to see my friend Elliot in Northumberland. 110 miles round trip and the Bullet performed just as it should.

Setting out, slight slippage going uphill a couple of times - will go and adjust the free play. But just chuffed along like a good 'un.