I decided to replace my stock TCI. I had contemplated rebuilding the stock unit but discovered mine did not have any settings other than Idle and Full Advance. Perhaps that part of the circuitry is faulty but the IC controlling that is not available (18 Pin custom 4 quad comparator). The later TCI units with the double sided PCB have an HA17902 14 Pin quad that can be replaced with an LM2902N and the Darlington transistor with an ST901T.

I settled for the Boyer Micro Power XS 650 Kit00303 due to it being a local UK product with good customer feedback and good technical assistance.

Before removing the stock ignition I hooked up a strobe light to confirm where the Full Advance position is on the alternator/timing plate. With the XS SH no marking is provided for full advance because this is controlled by the TCI unit and it is assumed that once factory set it should never need to be adjusted again. 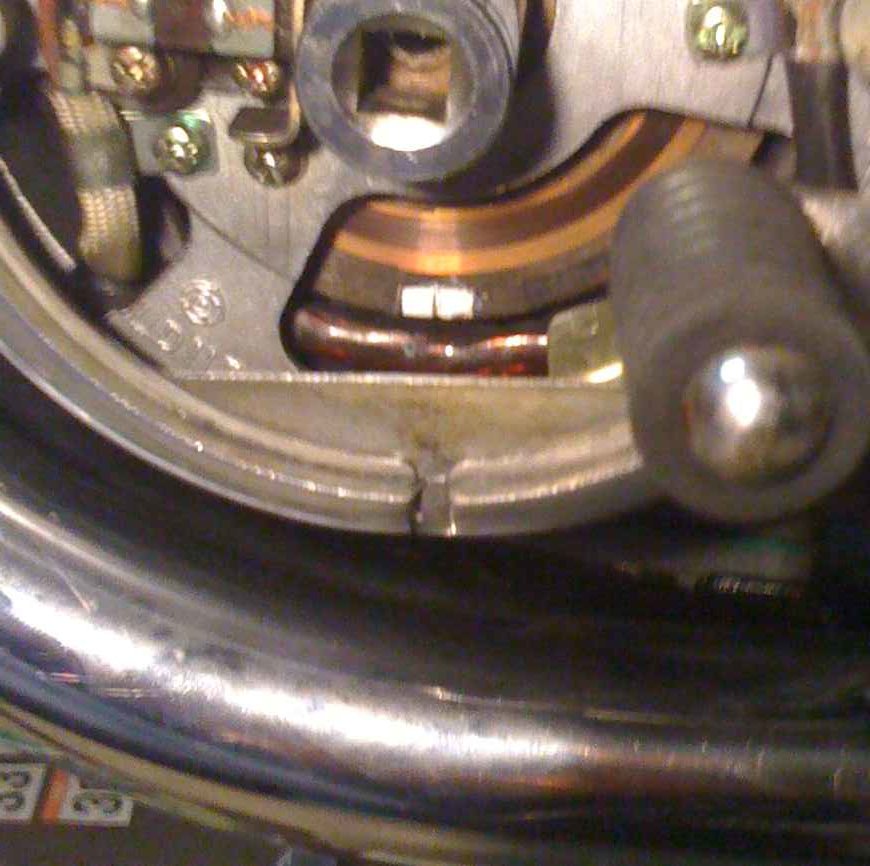 In the photo above, as pointed out by others, the full advance coincides with the center of the drain groove in the side cover and this I also observed. I also calculated the position using trigonometry for 40 degrees from TDC and have filed a full advance mark on the alternator very carefully based on these calculations. I also confirmed that the TDC marking was correct and checked the camshaft on the RH side to ensure that the pin hole was in the correct location for TDC. The TDC marking on the steel plate is to the right of the "T". 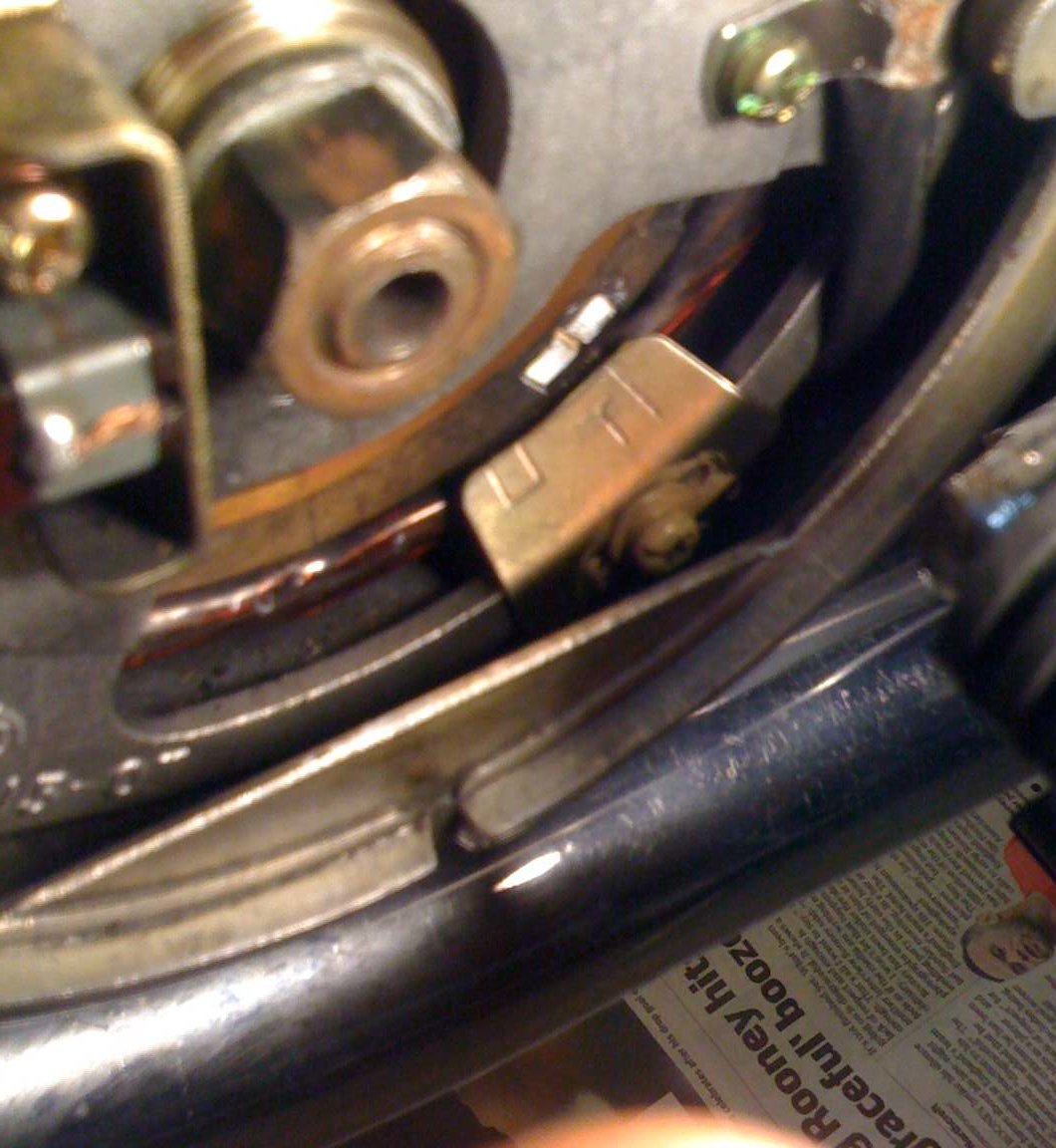 With the crank set at TDC a 3mm dill fits very firmly in the pin hole and shows vertical with the engine. KIT00303 as supplied assumes that the XS is fitted with the advance and points mechanism. Although this is all removed during the installation, the Kit requires that the bushes remain in place. The mounting of the magnetic timing rotor uses these bushes as spacers to center the mechanism.

Magnetic rotor: The threaded section is approximately 12mm OD and pushes into the LH camshaft bush. 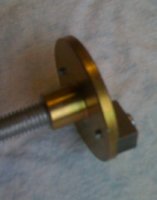 The threaded rod is secured on the RH side of the camshaft and again the fitting is approximately 12 mm and fits into the RH bush. 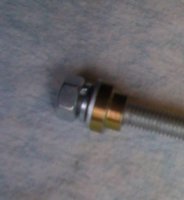 The XS SH came with TCI ignition so no bushes were ever fitted to the camshaft. I made up some spacers on the lathe from Aluminium to allow me to center the magnetic rotor: Approximate dimensions 12mm ID, 16mm OD and 10mm in length). Alternatively I could have bought a set of bushes. 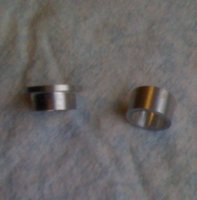 The lip on the spacer to the left was added to give a better seating on the RH side of the cam. Both spacers were fitted and then the magnetic timing rotor secured to the camshaft as per the Boyer instructions.

The next step involved replacing the old coil with the new coil supplied with KIT00303. I decided to mount the new coil in the same location as the old and this required fabrication of a mounting plate to bridge the old coil locating bolt holes. I used 2mm Mild Steel with a triangular section removed to accommodate the new coil. The following photo shows the new ignition coil bolted in place and is viewed from the LH side of the bike. 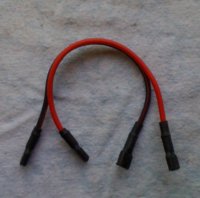 The male spades were inserted directly into the plastic connector and these two wires will be picked up from the harness to connect with the ignition box using the harness connector for the stock TCI located on the LH side of the bike next to the rectifier/regulator connector. These two harness wires serve the exact same function for the Boyer ignition as they did for the stock TCI. Red/White provides the power from the ignition switch and the orange controls the switching of the coil via the ignition electronics.

Note the red/white and orange wires on the left of the connector coming from the harness and the red and black wires exiting the plastic connector and leading to the coil: 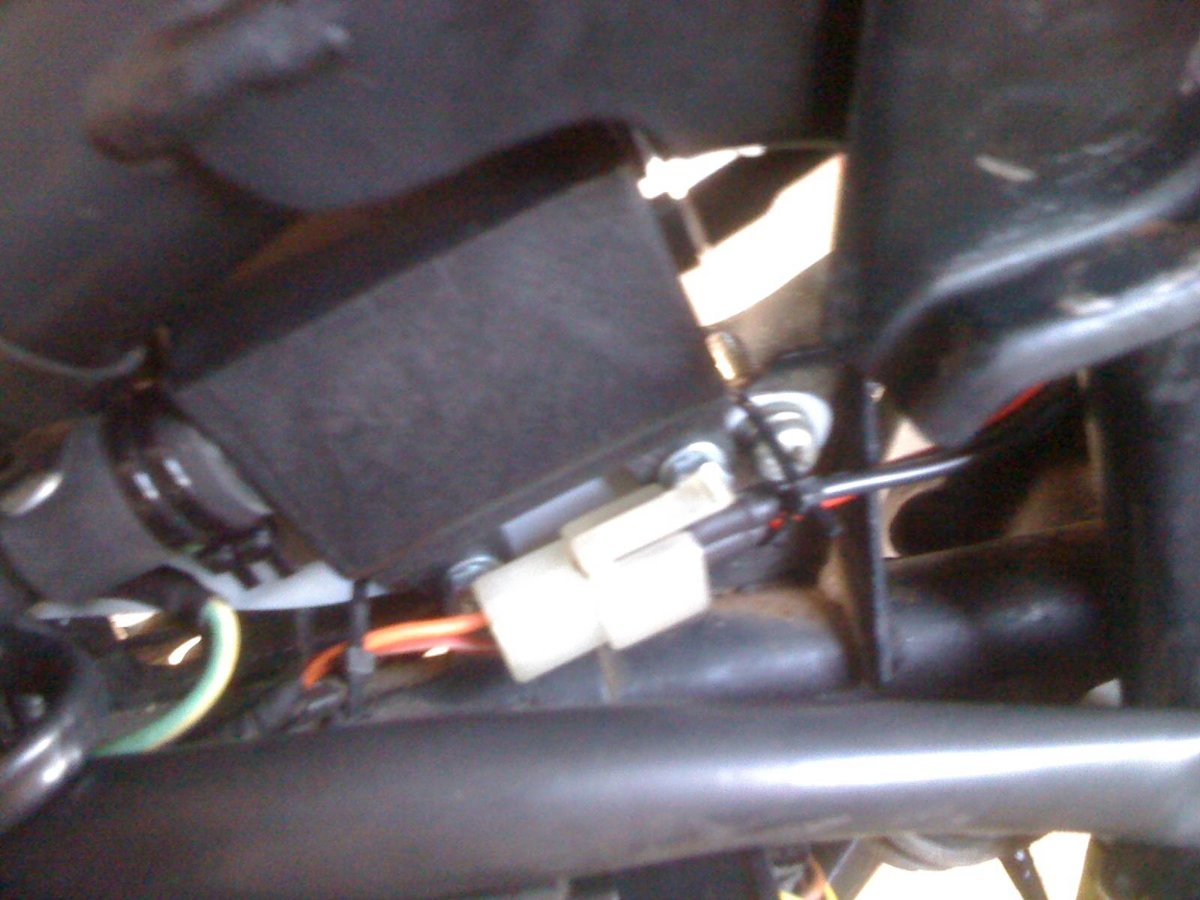 It is possible to fit the Boyer ignition box comfortably underneath the indicator and auto cancel units by strapping it on with the supplied plastic ties. Although I initially placed the Boyer ignition box in the original stock TCI plastic case, Boyer Bransden advise me that the ignition box should have free circulation of air around it to prevent overheating. I fabricated a simple holder for the ignition unit with holes positioned for locating the plastic ties and to allow the unit to be bolted back in place using the original TCI mounting bolts. 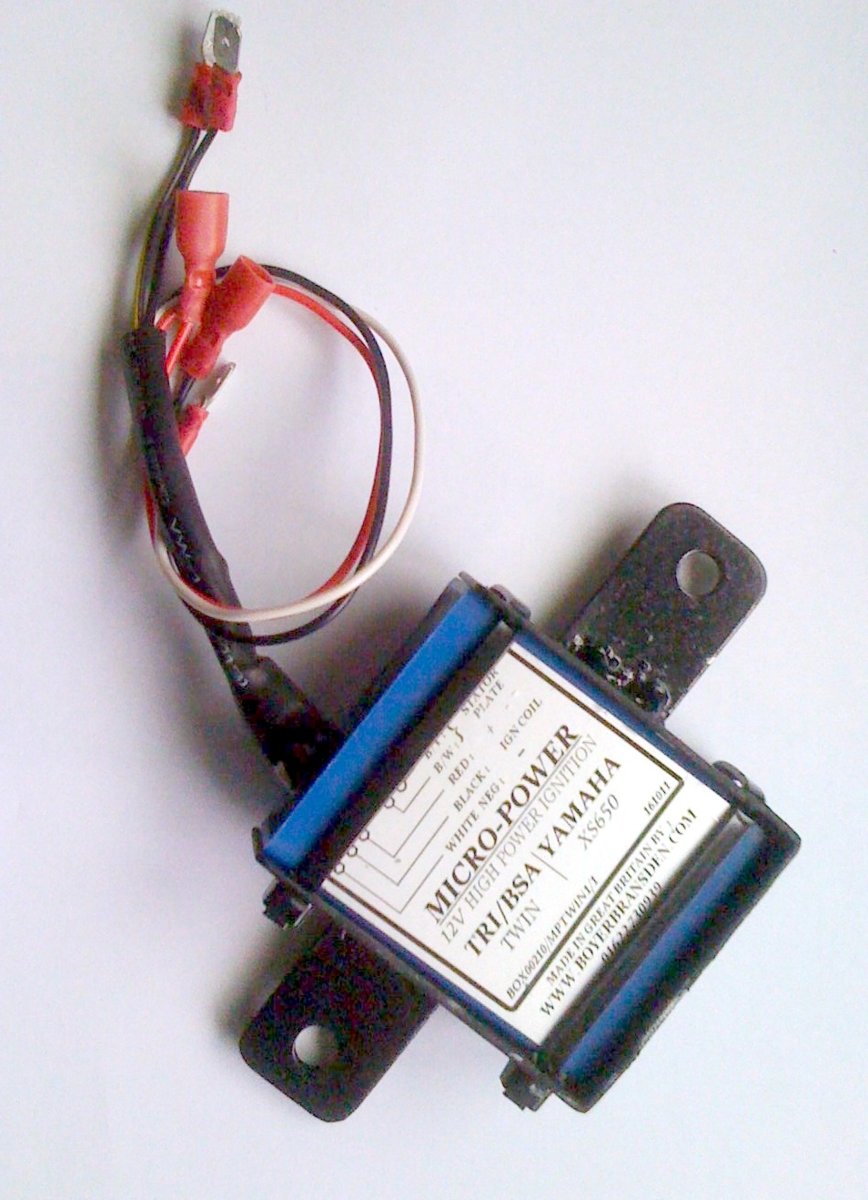 A length of heat shrink was placed over all 5 wires to stiffen them up a little so they could be more easily secured to the chassis during installation.

The Boyer pickup coil plate was then fitted over the magnetic rotor as per the instruction sheet i.e. the crankshaft was set at Full Advance. I found this easier to do with the plugs in rather than out. I lined up the paint spots on the Boyer timing rotor with the hole in the pickup coil PCB then tightened the locking nut on the RH side of the camshaft. Note: Originally the wires (Black/yellow and Black/white) from the pickup coil PCB were run back up towards the coil following the arc of the ignition leads. I made an extension lead to run these pickup wires under the ignition coil and then traced the RH side of the harness back over the top of the RH air filter and down behind the plastic tool compartment into the location of the ignition box/rectifier.

Change: Following feedback from TwoManyXS1Bs regarding possible interference from the ignition coil/leads being picked up by the Boyer black/yellow and black/white timing leads I have rerouted them directly up to the frame above the carburetors where they are strapped to the harness. From here they follow the RH side of the harness back over the top of the RH air filter and down behind the plastic tool compartment and into the location of the ignition box/rectifier.

In the photo below you will notice that I have tried to keep the wires from the pickup coils away from the ignition leads. Where they do cross each other under the tank they are almost perpendicular. This configuration virtually eliminates any coupling between the wires. 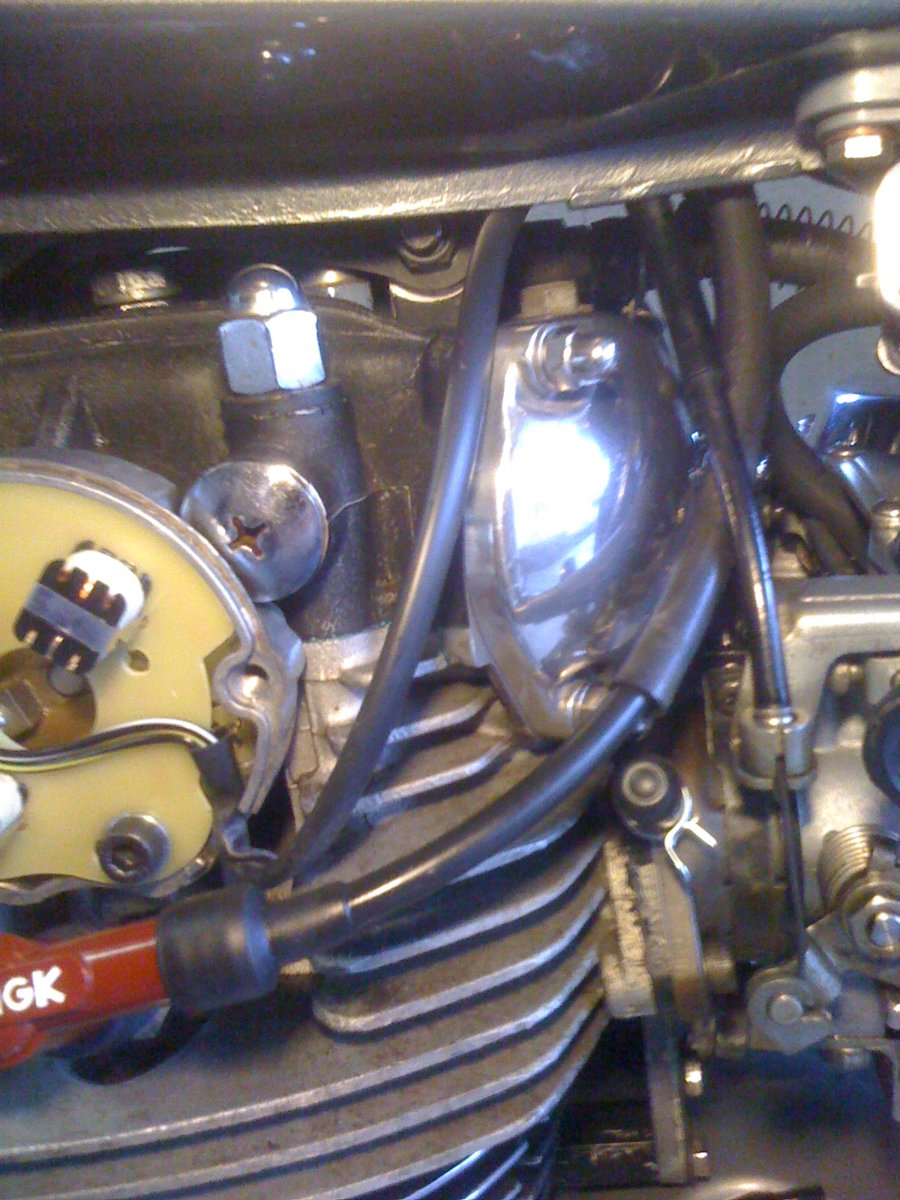 All wiring terminating with the Boyer ignition box in the cavity space behind the rectifier/regulator and above the swing arm bushes will be hidden when the triangular shaped plastic tool compartment is back in place. The connection of the red, black and white wires with the Boyer ignition box was made to the original TCI connector on the LH side of the bike using male spades. All wiring was wrapped in PVC tape and secured firmly to the bike frame and harness to ensure they do not get bounced around too much. The original spark plug leads had protective tubing over them, possibly made of rubber. I removed these, cleaned them up and placed them back over the new leads for added security.

Hi Paul and thanks for the great post and pics. I too am dealing with 2 Boyer ignitions an I can use all the info I can get. If there was a "Electrical Idiot Award" I would have won it years ago. Great thing about this site is all the stuff is covered somewhere. You just have to search and read. If you can`t find the answers here your just not looking hard enough.

excellent write up paul . Theres a lot of work in that ....ask me how I know ..groan.
Hopefully someone will make it a sticky in the techy section for easy reference .
well done that man

The timing requires the use of a strobe light. The first step is to set the crank shaft at the full advance position. Since the XS650SH does not have a full advance marking I had to determine this position as outlined above in Entry 1. The paint spot on one of the Boyer rotor magnets was then manually adjusted until it lay in the center of the hole on the pickup coil PCB. This involved setting the PCB at its center adjustment position and then rotating the magnetic rotor until the spot is centered in the PCB hole. The magnetic rotor was then fixed in place by tightening the locking nut on the RH side of the camshaft while at the same time ensuring the crankshaft did not deviate from the full advance position.

Note: Boyer Bransden have advised me that this initial positioning of the paint spot is only done to get the ignition timing to a point where the engine can be started.

I then loosened off the Boyer magnetic rotor's locking nut and rotated the magnets slightly anti-clockwise, tightened the lock nut, and positioned the pickup coil PCB to its central adjustment point. On restarting the engine the strobe light showed the ignition was firing at the center of the idle position at approximately 1200 rpm..

The final positioning of the pickup coil PCB was made by running the engine to high revs (approximately 4500 - 5000 rpm) and carefully adjusting the PCB position so that the timing mark lined up with the full advance position. This completed the timing exercise.

Out of curiosity I then manually set the crankshaft to the full advance position and noticed that the paint spot on the magnet lay just outside of the PCB view hole. This is not an issue according to Boyer Bransden because the alignment of the paint spot is is just for the initial setup. The final positioning of the pickup coil PCB relative to the magnets is determined using the strobe light at high rpm as done above.

Boyer Bransden have also provided me with some additional information:

Nice write up that! Ive used Boyers for years and they're my ignition of choice on twins

Some of the other electronic ignitions have a caution about locating sensitive components and wiring near coils and hi-tension leads. Any similar cautions with the Boyer?

Thanks TwoMany, what bothers me is I ran the pickup close to the ignition leads. Must check this out tonight and even discuss with Boyer after New Year.

I have finally added the timing setup in Entry 4 above. I have included some comments from Boyer Bransden regarding replacement coils, free air movement requirements for the ignition box and their view regarding the positioning of the magnet paint spot inside the view hole of the pickup coil PCB.
A

Thanks for sharing - very informative; I will re-route some of my B-B wiring based on what you've presented.

I know this is an old thread, please forgive my ignorance but...
Is the original ignitor box still required after Boyer installation?

Boyer Bransden provides their own ignitor box plus coil and pickup sensors. Basically everything you need to replace the old ignition system.

That's what I was thinking but I didn't want to unplug it for fear it might affect the new ignition. Thanks!

G
Converting to TCI on the cheap ?