got one wheel together today and a set of bearings for another rear hub are on the way so it was time to clean up the rear drum. I buy sitters and barn bikes often as not watter has gotten in the rear hub. sometimes the shoes have fallen off the carriers usually there is rust on the surface of the drum most of the time they can be saved. Here's one low cost, fairly clean way to get r done.

I had a knife sharpening stone laying around, this is one of the man made porous types of stone, that's important, you don't want a natural stone for this job they are not porous enough and will clog with the rust you are trying to remove.

about like this one, prolly $5-10 at the local hardware.

I cut an oil bottle to act as a catch basin but have the spokes off this can be done with the wheel assembled just as easy. The trick here is my "go to" mineral spirits. Keep the stone and inside of the drum soaked in spirits, dip the stone in some spirits and the rust will basically fall off the stone, opening the pores and exposing the cutting edges for another round of scrubbing. Have a roll of paper towel handy, keep wiping up the rust you remove so the stone doesn't "load up". I keep the stone at 90 degrees to the drum and work around the drum cleaning up about 3" segments. This fairly rusty drum was done in less than an hour. The edges of the stone will start to wear a bit and that is fine it kind of makes the stone fit the contour of the drum. You can use wet or dry sandpaper with solvent also but I kind of like how the stone keeps the drum surface flat and even works down the ridge on the outside where the shoes don't rub.

Last pics are the casting bridges removed from the fins before I got the rest of the fins cleaned up. So far the best way I have found to do this with typical home tools is a hacksaw blade in a sawzall, it made quick work, had this done in about 1/2 an hour.

Then various files sandpaper and roll lock disks to finish up and smooth them out. 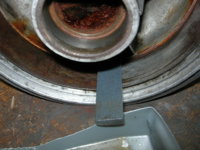 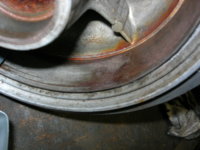 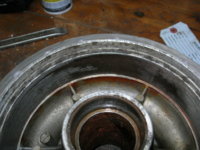 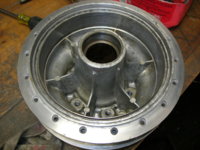 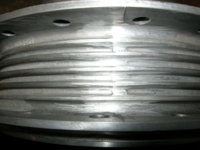 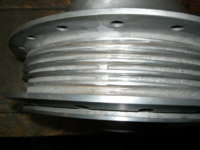 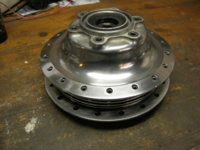 The last pic is a hub that's done with polished fins and black paint between.

I'm all ears if anyone has other ideas and techniques that have worked for you.

And the last one I did assembled.

Instead of perpendicular the stone to drum, how bout parallel? U do enuf barn find rehabs that in time, the stone will "bed in" just like a shoe, making the job faster. Ive never done this, i just scrub the hell out of the drum with sand paper, but I dont do this as often as you do. And i did not know drums were shiny silver. Mine stay brownish. But work a whole lote better after i scrub the glaze off

With all the renovation work you do, I'm surprised you don't have a blasting cabinet. Glass beads make short work out of cleaning drums and hubs.

They make de-glazing used shoes and pads easy too .....

5T: What size of glass beads do you use? Also, do you paint the bare metal on the shoes and drums when they are all cleaned up?

Had a sand blaster years ago and hated it so much I never have gone back. I see hughes bought a Aquablaster but woosh that's some bux! I like the stone because it reveals grooves and wear patterns. With the mineral spirits it keeps brake dust from getting everywhere, I don't trust old brake dust so much. As always; be careful with your used solvent rags and paper towel! This is kind of a low budget how to also. A total of $10 will get r done. My ancient lathe is about 1/4" shy of swinging the rear drum, damn it. That would make the fin clean up SO easy! I'm almost tempted to grind the ways to clear the drum. I think this was the first rear hub I have ever had with frozen/bad bearings! Don't forget to remove that bushing from the LH bearing before you toss them.

I'm pretty sure I got the 80 grit beads. I got them right at HF when I got the cabinet. I recently bought more but found them cheaper elsewhere .....

No, I don't paint any of the parts after blasting. They're mostly alloy and really don't need it. The drum is steel but it's rather pointless to paint that, the shoes would just scrape it away. I don't do anything more to the finned area between the spoke flanges other than clean it. Once the wheel is laced, you can't get back in there to maintain it so I figure why bother polishing. That area is hardly visible and as long as it's clean, I don't think it detracts from the overall look of the hub.