I stored my 1980 650 chopper in an unheated shack during a cold pennsylvania winter. It was ripping when parked, although the carbs weren't sync'd with a manometer and the jets were 2 up and probably need 3 up (short exhaust and pods). I did a couple weeks worth of touch up, mostly cleaning, fitting, and attaching things that were rigged up for the prototype phase.
When i rode it stock after each winter years ago i could pretty much just plug in a battery, change oil and it was good. Just started it up and it was surging, which was an awful struggle that delayed my build for a year while i chased the surging down into the advance. But i know surging can be electrical, air leaks and carbs as well.
Is it magical thinking to think if i just ride it for awhile it will work itself out? Have you had issues work themselves out after the winter? Any "usual suspects" for post-winter issues?

Also, before you comment on how it seemed to run fine stock so why would i chop it like an idiot, yes i am an idiot but the bigger idiot is the SUV driver who wrecked my bike but gave me a good excuse to chop it.
J

Every year some startup issues also have 1980

Have you had issues work themselves out after the winter? Any "usual suspects" for post-winter issues?

The float valves does not move properly ..And that is even though No gas in there over winter
i don't even expect it to run all right before one or two tanks have passed through.
Some use chemicals in the spring.

Gas with ethanol in it?
Have a read here.

Ethanol in small amounts is about as healthy for your motorcycle as it is for your body. That is to say it isn’t. But, it can live a long life on a diet that includes the stuff.
Best if you clean the carburetors and dump the old fuel that’s in the tank. Dispose of it or feed it to your car.
4

Jim said:
Gas with ethanol in it?
Have a read here.
Click to expand...

When I purchased my '81 special in Feb., I knew I wasn't going to get around to it for a while. It has a clean tank so I drained it and filled it with ethanol free with Stabil and a fat dose of two stroke oil, ran it for 10 minutes parked it and disconnected the battery. Time will tell. Thanks for the post Jim, very interesting.

I usually fill the tank, add stabil and run it so the treated fuel gets in the carbs. I'm sure it's not the best way but it doesn't sound like the worst either. My advance is still squirrelly and I don't think it's related to Ethanol or throttle business. The advance has been a problem all along, I think it's high time up upgrade to the e-advance. I don't think I've heard anyone regret it.

Honestly, I don't do much of anything to my 650s for winter storage other than try to keep the tanks full (so as to avoid condensation inside them). I will ride them over the winter, weather permitting, that's why I don't set them up for storage. I've never had any issues although they do seem to run a bit better once I use up that old gas and fill them with fresh stuff. I do use the no ethanol gas now but I didn't always. It wasn't readily available until just the last couple years. I had no issues with the ethanol either. Sitting one winter in my unheated garage doesn't seem to make the gas go bad. Sitting through a hot summer would be another story. I do need to put Stabil in my snowblower because of that.

If your bike is a stock 1980, it would have an electronic ignition and e-advance already from the factory.

Just had to retard the advance and then had a nice cruise. No big deal. Went to tighten the sump filter cover to prevent the oil leak and sheared a bolt off along with four or five threads. I've never drilled a bolt out of aluminum before, any words of advice or caution?
I definitely plan to replace all 6 screws. Thought I already did.

1980 Special Twin said:
Just had to retard the advance and then had a nice cruise. No big deal. Went to tighten the sump filter cover to prevent the oil leak and sheared a bolt off along with four or five threads. I've never drilled a bolt out of aluminum before, any words of advice or caution?
I definitely plan to replace all 6 screws. Thought I already did.
Click to expand...

I don't have a lift. I was thinking I should turn the bike on its side? It's not very heavy.

Got my vice grips on the nub, thank god. Replaced those shear bolts. I think i read 70-80 inch lbs to prevent overtorquing. F-ing love this bike.

Yes, 70 to 80 in/lbs. I used to go 80 but recently have backed off to about 72. Sump plate and right side cover still seal fine at this value and I figure it's less stress on the 40+ year old threads in the alloy cases.

Did some work while it was on its side. A long overdue scrubbing for one. I also put red loctite (uh oh) around the outside of the freeze plug for my starter delete. Dunno if anyone else ever does that. Should still come out with a few hammer whacks if needed, and gives me some peace of mind.
I didn't make it to 70 inch pounds. My calibrated elbow clicked before i got there. Dunno if there's any harm in under-tightening other than possible leakage.
Made sure to use blue loctite on those.

So my Dad gave me this set today and I’ve never seen one like this. Each barrel has a different diameter hole on each end to fit over different sized bolts while the drill bit runs through a hole in the center. Then a hex shaped bar is driven into the hole and the nut fitted over that for standard wrench sizes. It supposedly 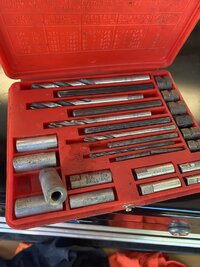 Wingedwheel said:
So my Dad gave me this set today and I’ve never seen one like this. Each barrel has a different diameter hole on each end to fit over different sized bolts while the drill bit runs through a hole in the center. Then a hex shaped bar is driven into the hole and the nut fitted over that for standard wrench sizes. It supposedly View attachment 213917makes things super easy.
Click to expand...

What brand name is it? also what do they call it?

Wingedwheel said:
It’s a Blue Point.(Snap-on) problem is it’s a set from the 60’s so I don’t know if they even still sell it.
Click to expand...

Thanks, I'll ask the Snap-On guy.

That's for drilling out bolts? I had scheme to cut short and then drill through a bolt to screw into the threads to use as a jig for my left hand drill bits. But i didn't have to do it. And i took a little ride and had no leaks!

For oil retaining covers, it's not so much how tight you make the bolts but rather that you make them all the same.

I've gone through several oil changes since I started this build, sometimes with zero miles in between (i.e. decided to delete the starter or remove the engine). I call it a "cleanse." Last fall I got it running in "prototype mode," meaning I didn't have the jetting, timing or sync quite right but it was running well enough to show off around town every now and then. I'd say I put on no more than twenty miles in this condition. Granted, it did sit for a winter afterward but I'm pretty surprised at how gross the oil was that came out yesterday. I'm hoping that will improve when I get it tuned up this week. I'm finally getting around to building one of those cheapo manometers and then I may go one-up on the jets.