Never enough. Interesting read, never thought of electrically spinning up the turbo, genius. F1 seems to go through phases of domination by one team or some times two, like we have seen in recent years. That is part of the sport, all sport come to think of it. One driver in the dominant car wins everything, the rest are just there to contest the remaining places, hope to finish second or third. As a driver Hamilton is fantastic, likes to whine and complain a lot, and needs constant feed back from the pit wall. But he is a strange young man out of the car. Verstappen on the other hand, I like this guy, just do it attitude. Doesn't seem to need his ego massaged as much, and a great driver, future champ, maybe. I'm looking forward to more close battles between the two, and with luck we will have both championships decided at the last race. I do like the new young drivers coming up, Lando, George, Carlos and Leclerc are very talented and the future of F1 is in good hands with them on the track. The top brass just needs to let them race. The three guys on the Land Rover I posted above were Moss, Brabham and Bruce McLaren.

I've sort of had enough, yes. There is no longer any possibility for a supremely talented driver to grab a car by the scruff of the neck and make it outperform, like Senna did with the Toleman, or Villeneuve did with the Ferrari. That's why someone like Hamilton will always have a bit of a cloud over him, 7 championships notwithstanding. Was it him, or the car? Russel was threatening to break his duck with a win in the Merc before his pit stop got Irvine-ed. Not bad for a guy thrown into a car that he didn't even fit in with next to no warning.

I also see no need for F1 to have any engineering relevance to road cars. Electric cars will have to face grim reality soon enough, barring some monumental breakthroughs. The grid can barely keep up with air conditioning demand, much less cities full of li-ion powered automobiles gobbling up every spare electron. We already have to shut down at work when the temperature rises so the grid in Ontario does not get overtaxed.

Spec tires, spec fuel. Normally aspirated screamers with very little else in terms of tech. Heck, bring back the gearshift. If they want to be more environmentally responsible, maybe restrict the number of GPs and keep them in Europe instead of jet setting entire teams around the globe in 747s.

F1 is certainly one the poster children for the old adage; "Speed cost money how fast do you want to go ?"

Big teams, big budgets, little teams little budgets. ( When I worked for Mercedes their F1 budget was whispered to be approximately $400 million / year almost 10 years ago )

Hey All. I wanted to check in with everyone and get your thoughts on this awesome F1 season! I am enjoying every minute of it. I was not around for some of the epic rivalries of the past, but I feel like Hamilton and Verstappen are entering that territory. The top two aside, the battle between Ferrari and McLaren is providing some really good midfield action. Looks like we got our wish with Russell and Mercedes... I feel that Gasly's excellent performance is also worth mentioning. 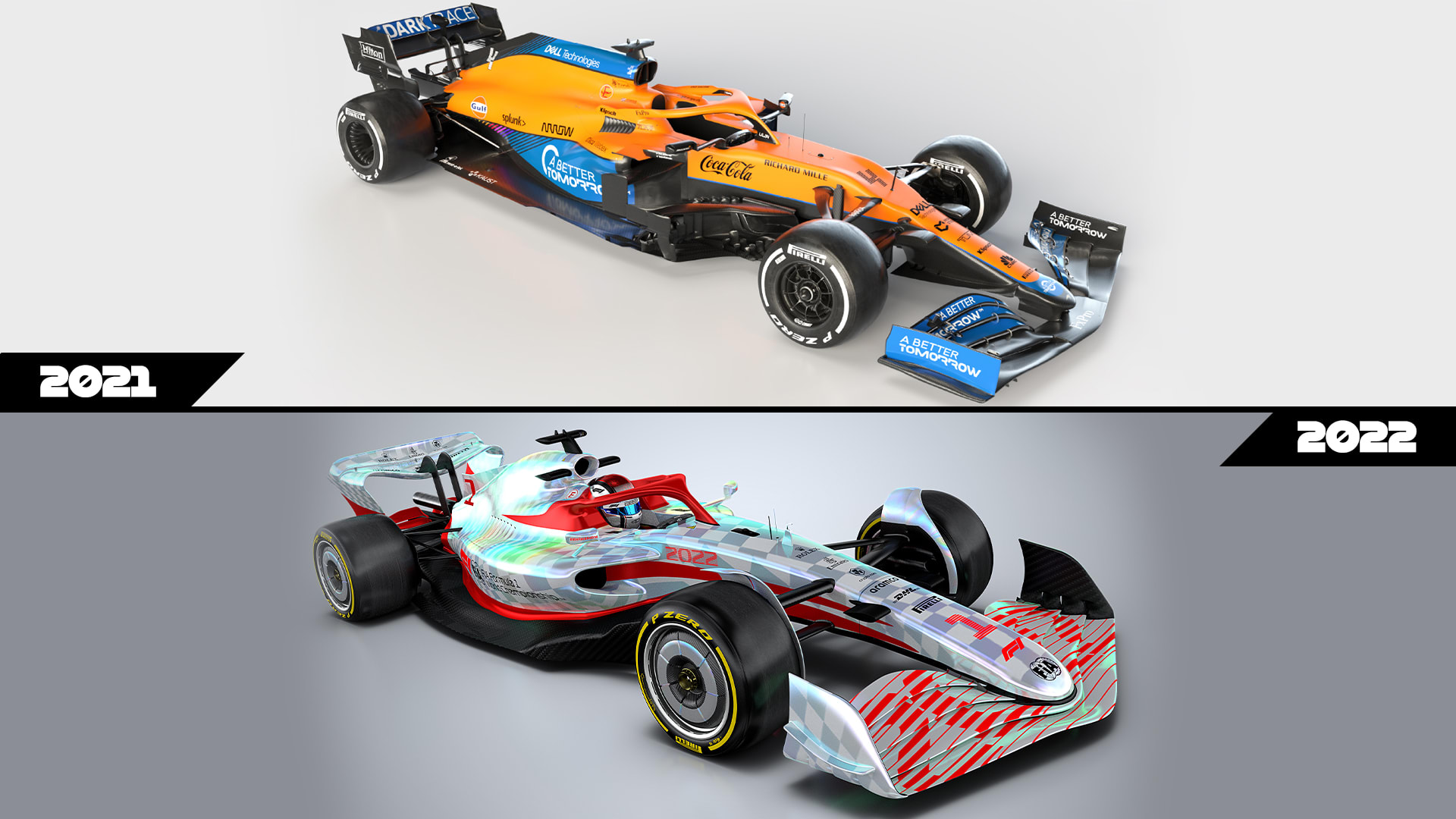 What do you think about it? Here is a quick read about it without having to suffer through the vomit-inducing PR of F1/FIA promotional videos. I can't wait to see it in action. The front and rear wings are radically different, but I absolutely hate the aesthetics of the larger wheels.

Hi Rhy, I fully agree this is a classic season. Two real racers both on their game and still all to play for. Plus plenty of action all through the field. Including Maclaren v Ferrari. I'll take a look at the link to next year's cars. Cheers, Raymond

What a shit show that was today.

Agreed. Very disappointed in that track and the race itself. To hear the teams negotiate with Massi has me wondering what else goes on behind closed doors. Tied with one to go, perfect. May the best driver win. Who ever that may be.

NashGTI said:
What a shit show that was today.
Click to expand...

I only got a chance to watch this last night. And a shit show it was. A seemingly dangerous show at that... I can't wrap my head around taking that many blind corners at those kind of speeds.


kiwi said:
Tied with one to go, perfect. May the best driver win. Who ever that may be.
Click to expand...

Yes sir. I barely have any fingernails left after last night! I would really love to see Verstappen take it, if nothing else than to upset the status quo, but I won't be upset if Hamilton pulls it off. They are both deserving in my book.

Now that we finally got a close championship in the turbo-hybrid era, let's hope it's not ruined with the 2022 changes!

It's only the second time in the history of F1 that two drivers leading the championship go into the last round tied in points.Technically, Verstappen leads the championship on race wins this season. Nobody would suggest he just needs to crash with Hamilton and take him out at turn one to win. Schumacher and Damon hill 1994?

I am pulling for MAX. Lewis and Mercedes desperately needed some competition. They have had a cake walk since the start of the Turbo/Hybrid. Lewis' only competition was his former team mate Rosberg.
Fingers crossed next years cars will have more teams competing for the title, not just a one or two horse show.

I'm rooting for chaos. It's not really socially acceptable because of the danger to everyone obviously but that's easily the best viewing.

For instance, say Max picks up a quick puncture and has no legitamite hope of being Lewis on track but can win the title if neither picks up points. You'd be watching the entire race Wondering if he's going to turn it to a demolition derby. Or it's close late and an Alpha Tauri causes a pileup.
Last edited: Dec 8, 2021

What are you building here? Looks like a hell of a good project

Rhy650 said:
What are you building here? Looks like a hell of a good project
Click to expand...

HAHA, whoops. Wasn't paying attention to my notifications and that was supposed to go in my race car thread.

Well today is the day. As the late, great Murray Walker always used to say 'This is F1, anything can happen, and usually does!'

For those that haven't heard of Murray Walker, he was Britain's Mr F1, TV commentator on the races for decades and even came back as an occasional guest until not long before he died last year at the grand old age of 97. His knowledge of the sport was encyclopaedic, his commentary style was enthusiastic and excitable and littered with Murrayisms - verbal foot-in-mouth moments. Fondly remembered by British fans and the F1 community.

Real good race today. Amazing bit by Perez in the middle on dead tires to hold up Lewis. Got a clean bit of WTF a couple times too which kept things interesting. Max wins....for now at least. Can't imagine today going without protest.

Yes, Michael really gave us a great finale to an exciting season!
Real racing, no drag reduction. One lap.
I spilled my popcorn all over myself during that last lap.
The brief Perez/Hamilton battle was very exciting.
I don't like Max even though I am Dutch. He's as self-centered as a person can be, unable right up to the end of the ceremonies to acknowledge his devoted fans.
However, I applaud his win. He deserved the trophy.
I can't wait for 2022 in 3 months. It will be very interesting to see what Russell will do with his fantastic opportunity.
Last edited: Dec 12, 2021

Yesterday was the first GP I watched this year.
What a drama from start to finish!
Lewis gained an early unfair advantage, but Red Bull continued the fight on track without bitterness or appealing.
Its never over until some fat bird sings apparently; and the tables turned on the last lap.
Red Bull strategy worked with a lot of luck behind it.
Well done Max & the team!

Forgot to mention Perez; what a killer drive he did as a team player.
Drive of the day in my opinion.....