First let me thank Lou, gggGary, Skull, retiredGentleman, azman and maxPete for all the great advise in another thread... and I sincerely apologize for side tracking Lou's efforts.

I got 'er started again and with the darn button!!!! Woooo hoooo it was that darn ignition grounding issue that I read about so many times. I truly thought I scrapped enough paint off my tracker bars around the left and right housings, but apparently not.

Background. My buddy gave me this bike in June for $20 with the condition that he gets first chance to buy it back if and when I ever decide to sell. It belonged to a family member so it has sentimental value to him. Me, I love motorcycles and I've always wanted to resurrect one. I know very little about the mechanical aspects of them, but I want to learn. I'm a programmer and so I know how important these sorts of user forums are and hopefully I can offer up some help to others. The bike was last registered in Saskatchewan in 1992. I'm in Alberta so the first thing I have to do is restore it back to a state that is safe and will pass an out of province inspection.hopefully before winter!!! It's coming Once that is done, I might create a street tracker - maybe not.

So I'm back to where I was 3 weeks ago. Engine runs and idles with choke on..., after a couple min i turn choke off and it idles nicely. Give it some throttle and it dies. Except now i actually got a few nice revs of about 2500 rpms on the throttle before it died. I suspect pilot and/or main jet issues? Hopefully not slide problems.

What I've done this far:
- new carb and air box holders (they were cracked and brittle)
- new plugs, batttery, oil, air filters, fuses
- Installed in-line gas filter and new gas line
- checked vacuum tube (tight on both connections and not clogged)
- new front break caliper re-build (pushes fluid now. Success. (Need to clean the rotor caliper end Now i suspect)
- Back break seems to be fine
- cleaned carbs. Unstuck the floats,(took 8 YouTube videos and 4 days to figure out how to get those darn push pins out of the float posts) checked for holes (none). Measured heights (27 mm) ish. Didn't adjust them.
- new float valves and seats
- cleaned pilot and main jets as best I could. They turned green after!? Yuck.
- rubber carb slidy things seem ok. They go up smoothly and come down with a bit of a cathump sound - seems like a good seal.

Reinstalled everything = same symptom.., still dies after a bit of throttle. Bummer.

Next step: I prchased new pilot, main, needle jet and needles as per recommended sizes on xs650direct. They suggest using slightly larger main and pilot jets to deal with a lean situation. I dunno.... I'll be doing that tomorrow night! I'll post the results. 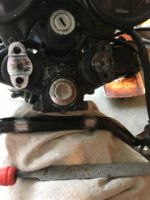 Seriously, you should be asking on here before buying or making decisions...............There is a consensus that jets should be genuine Makuni, no guarantee mikes jets will be Makuni specs............Makuni needles and jets have their emblem stamped on them.

If the diaphragm needs replacing there is a guy who makes aftermarket ones that use your slide. Very cost effective and many have used them with very good success.

Before making decisions and buying gear post up and ask if there is alternative options because there is a lot of info from here on after market parts. Some of MikesXS or XSDirect parts are ok but other parts not so and or there can be cheaper alternatives.
Last edited: Aug 16, 2017

More pics needed!!
Cleaning the riser clamps makes no difference whatsoever. LOL Yamaha uses a ground wire to the LH (turn signal etc) switch. The ground then goes from that housing through the handlebar, to the throttle side housing to provide ground for the starter button. The risers are not in the ground path they are held in rubber bushings. So you need to remove paint under the handlebar controls left and right.

What skull sez about slides, BUT the choke plunger seal ALSO affects slide drop. Even if the diaphragms are good if the rubber seal at the bottom of the choke plunger is rough the slides will still drop quickly.

BS34's; are the rubber caps on the pilot jets, were pilot jets removed and cleaned? That TINY hole in the pilots is easily clogged and clogged again. that's also true of that orifice that supplies the choke and idle circuits.

Ok. Thanks guys.
Yes. I scraped the left and right control housing really good this time. The bar clamp work was over kill! I'll take more pictures tonight. Any advise on posting pictures and videos in side the current post? Do I just position the cursor and trust the upload until will put it there? I'll try again with a carb picture. I'm doing all this on my iPhone so ... 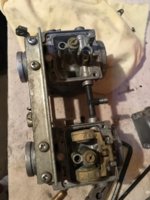 Yes. The slides seem to drop slowly while doing that thumb test this morning - 10 - 12 seconds approx. thank you for the great description!

Yes the rubber plug on the pilot jets are there. In fact, I got new ones with a carb rebuild kit. Contained new float valves seats, seat o ring and rubber caps. Yes I cleaned the entire carbs each pilot and main jet with carb cleaner and air. Being careful not to get solvent on the choke handle and fuel t connector. The pilot jets turned green after I cleaned them. That was before vacation mid July. I have new ones to try albeit likely cheap knockoffs

I also tried sea foam befor vacation. Did not appear to make any difference.

If you look at your control assemblies, you will see a little clip or clamp on the lower half that clamps the wire loom in. The top edge of that is what grounds the housings to the bars so the area of the bars it contacts must be paint-free ...... Also of note is the little dots stamped on the screw heads. This identifies them as J.I.S. fasteners and these require a special screwdriver for a proper fit. 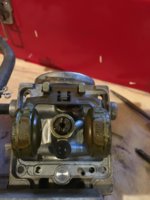 And one with the rubber plugs/caps.

Guss80special said:
Give it some throttle and it dies.
Click to expand...

That can be a symptom of extremely lean, especially if you can twist the throttle open as fast as you can and it dies instantly.

^+1 I think your problem might lie in the passage way from PJ to exit orfice. 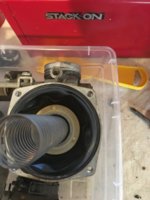 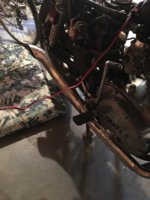 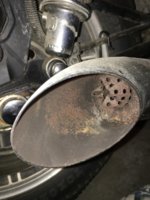 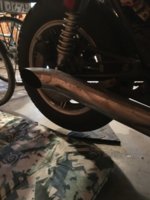 Ya - too lean.... That's the theory I was working on as well. Hence the new and bigger pilot and main jets. I will defiantly clean the carbs again while I'm in there.

Any advice on specific cleaning techniques for the pj passage orfice?

Also, the bike has a very loud aftermarket 2-1 muffler. Is it true that loud indicates no baffles and therefore little constriction leading to potential lean situation? See pics. My buddy said the bike ran great back in 1992 before he stored it, aside from a very stiff clutch... so I'm still hopeful a new pilot jet will help throttle things up.

Btw. I also tried throttle with air boxes on and off the bike - no difference.

Have you remove the pilot mixture screws yet?
To clean I remove the rubber plug and pilot jet. Using aersol carb cleaner with the little red extension pushed as far in as possible and spray watching the holes in the throttle body for flow. It is prudent to wear eye protection doing this. If the mix screw is removed you can back flush through it.

thank you
Are those the screws that are normally covered with thin aluminium to prevent people from changing them? See 12 o'clock on the above picture of my carb diaphragm. No, I did not remove them but I did check to see what they were at while troubleshooting. They were both at 1.5 turns. I changed them to 3 turns as per info I read on-line when trying to deal with lean issues. Made no difference. The fact that they were uncovered indicates that someone else was interested in them as well

Should I take them right out and have a look?

I thought those were used for idle? Are they used for the pilot jet interface/circuit?

Thanks for your time!!!

Guss80special said:
Ya - too lean.... That's the theory I was working on as well. Hence the new and bigger pilot and main jets.
Click to expand...

It should work as it came from the factory if it's in good condition. Stock jets aren't what's causing the problem. You used to read on here these models are so lean...would give somebody the impression they'd barely run until you did this and that. You might have to do this and that to turn it into a drag racer or something, I don't know, but they work fine just as they came from the factory.

Yup. Based on my track record of doing things 3 times before i get it right, lol, maybe a another good cleaning of the carb passages is all it needs thx.

Three times before you get it right might be the next step up from fixing what you broke Happy sailing.

I'll go back to those pesky pilots can you see light through the end of them? That hole is so small I clean it with ONE strand of copper from a motorcycle small electrical wire. Do a float dip test, hot cup of water, use pliers, quickly submerge it in the hot water for a few seconds only, bubbles = fail. Check compression both sides, those 2 into 1's are notorious for holing pistons, several have passed through my shop. Are both vacuum ports plugged or connected to petcock?

Ok. I'll add these to the to-do list. Thanks!

Left side vacuum port is connected to the petcock. The right ride is plugged.