Waiting for the aliens to take me awaaaaaay. 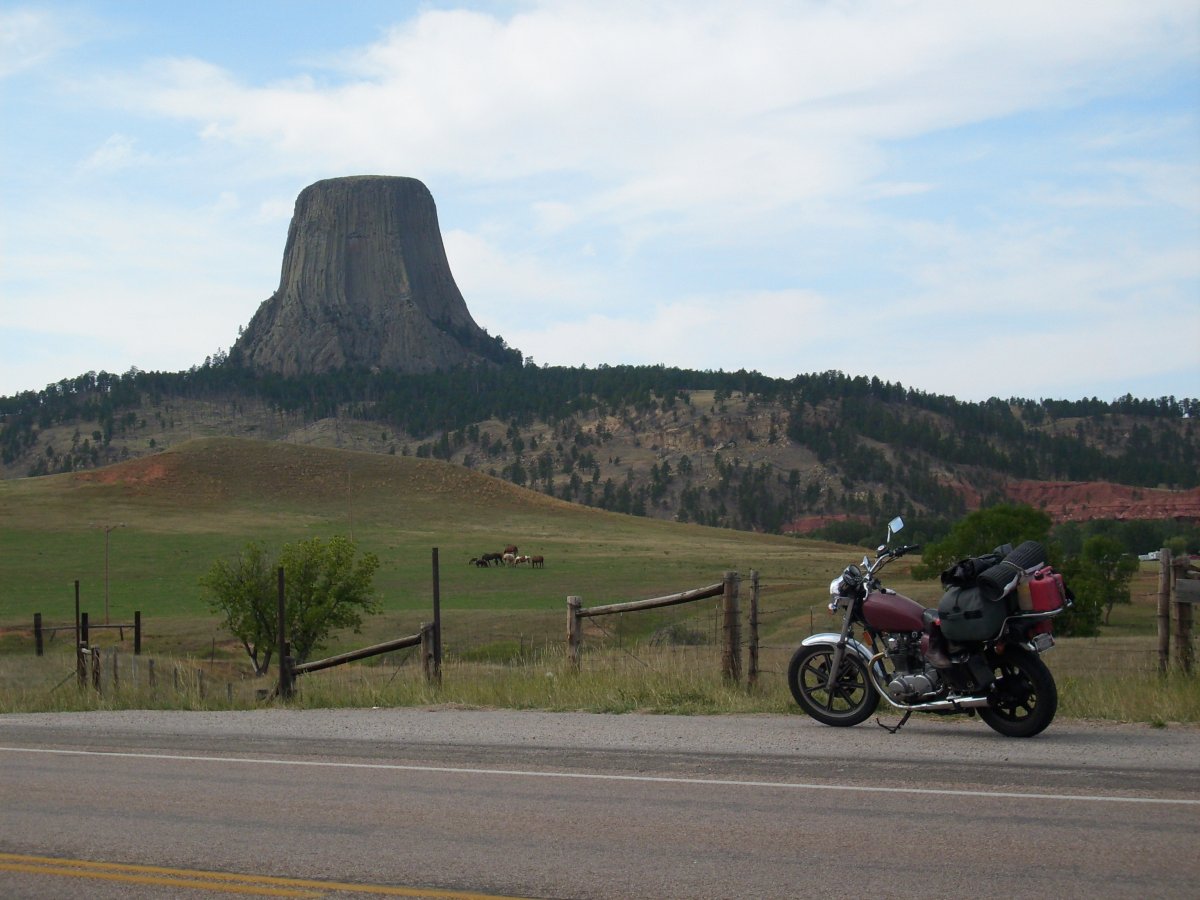 xjwmx said:
Waiting for the aliens to take me awaaaaaay.

great shot nice composition.
I just had a strange image come to mind looking at your bike with the bedroll on the back . 100 years ago someone on tour probably took the exact same picture of their horse with a bedroll on the back

Ethanol Factory and Greenhouses
View attachment 140987
Way in the distance you can see the stack for the ethanol plant. Huge greenhouses across the road from it are fed excess heat and CO2 from the process, said to be a win- win plan.
Due to the flatness of the surroundings, the stack from the plant is visible from all around, even from my window I can tell which way the wind is blowing and how vigorously.
Click to expand...

Very nice writeup Lakeview! We'll have to take a run up to LH Cove for some fish and chips sometime soon.

...and yes, holy cow, is it flat here. In Windsor, the biggest hill in town is at the landfill site and the locals call it Mount Trashmore. Of course, due to the Carolinian climate, we don't get much snow, so tobogganing for kids isn't much of a consideration anyway. We also have REALLY straight roads. The guys in my vintage M/C group will literally ride 10 miles out of their way to get to a road with a few curves. Poor Lakeview and I were delirious during the recent XS650 Society rides in the Ozarks, because those roads basically have a curve about every 26 feet.

I guess I'm making it sound like a bad place - and it really isn't. We have some of the best restaurants around plus all the attractions of Detroit are right across the river (and past about five police forces and two border service agencies). Oh well, home is where you hang your hat, I guess.

come over and have some of this Pete.
Lots of hills and winding twisting roads in glorious lush countryside .
This is 'hooligan' my 1964 Lambretta on a short test ride 'round the block'

peanut said:
100 years ago someone on tour probably took the exact same picture of their horse with a bedroll on the back
Click to expand...

I never thought of that. I'll search for them. I like "then and now" photos, especially Europe and WWII. There are lots of videos of that on youtube.

I don't think I could ever drive on the left side of the road. Been drilled in too long that over there death dwells

peanut said:
come over and have some of this Pete.
Lots of hills and winding twisting roads in glorious lush countryside .
This is 'hooligan' my 1964 Lambretta on a short test ride 'round the block'

That is one pretty unruly little Italian you are hanging out with Peanut - and for goodness sakes, you're riding on the wrong side of the road much of the time!

wrong side of the road lol

Actually most of the roads around here are barely 10 feet wide at most....... so we all drive in the middle of the road .
When we meet another vehicle around a bend its the driver with the biggest vehicle that wins and the other ends up in the ditch or hedge

When I see some of the vast desolate flat landscapes over there I realise our incredibly lucky we are here in Britain for environmental variety and great roads for biking. We have 2x coastlines with a 45 minute riding distance .I really should get out on the bike more whilst I am able to.

how did you pull that with your bike?

Just stay in 1st gear until you get on pavement.

just in case you thought that these scooters are a bit slow heres a 142 mph Lambretta showing the bikes up on race day.

peanut said:
just in case you thought that these scooters are a bit slow heres a 142 mph Lambretta showing the bikes up on race day.

That guy on the Lambretta absolutely mopped the floor with all of those other bikes - he “whupped them real good” (as John Clees would say).
I have sent these videos on to one of my CVMG buddies who often turns up on a Lambretta - to a wee bit of teasing from some of the Ducati and Laverda jockeys.

Confidence is mounting a rearward facing camera on your scooter on race day....

, literally spit up my tea lol

The devils tower is actually a giant petrified tree stump.

^That's right. From the days when there was less gravity.

Here are a couple of pics from other rides. Fiddler lady reading Irishy tunes using her tailgate as a music stand. She was a photographer with an office in Manhattan. She had some medical condition and was making a last grand tour of the West before she believed it would incapacitate her. Mailman on the road again , today I’m heading to.... But that’s not the whole story. I grew up in this part of the Valley, all the little suburb towns on the western edge of Phoenix all just kinda run together. For as far back as I could remember, it didn’t matter where you lived, Sine Hardware had a reputation. Any time you needed something special or hard to find, someone would always suggest Sine Hardware, it was not this place back then, it has much deeper roots than that.

Let’s turn back the clock One Hundred Eleven years ago. See that crowd of men standing out on that dirt road? They are standing in front of the old livery stable. The one Floyd Sine just purchased in order to tear down.
This was the historic entry point to the town of Glendale. Beyond those men you can see the railroad track and the open air building that was the train station. Floyd wanted this prime location for his new hardware store, which would feature a second story boarding house for weary rail travelers. 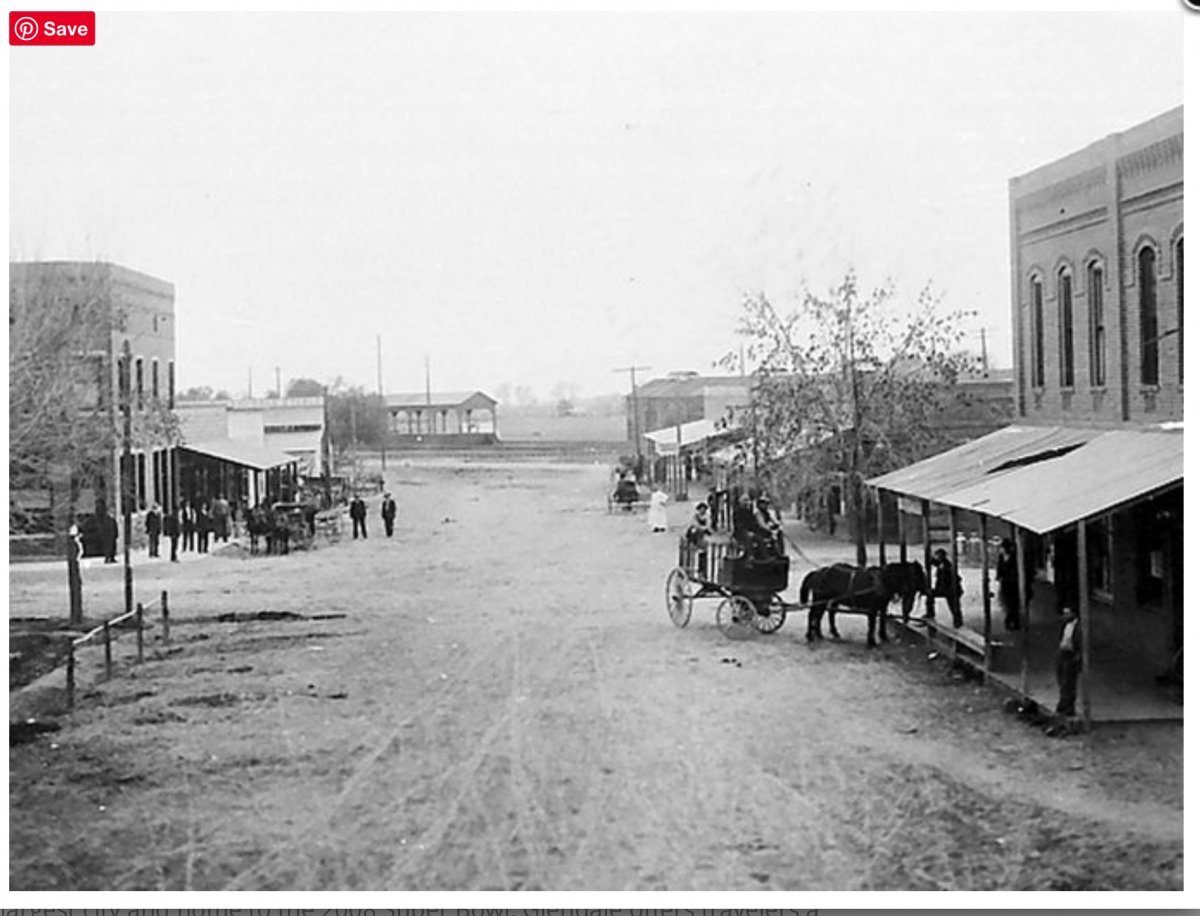 Floyd built that hardware store in 1911, and with his brothers Tuck and Van, and so began their small empire in the town of Glendale. 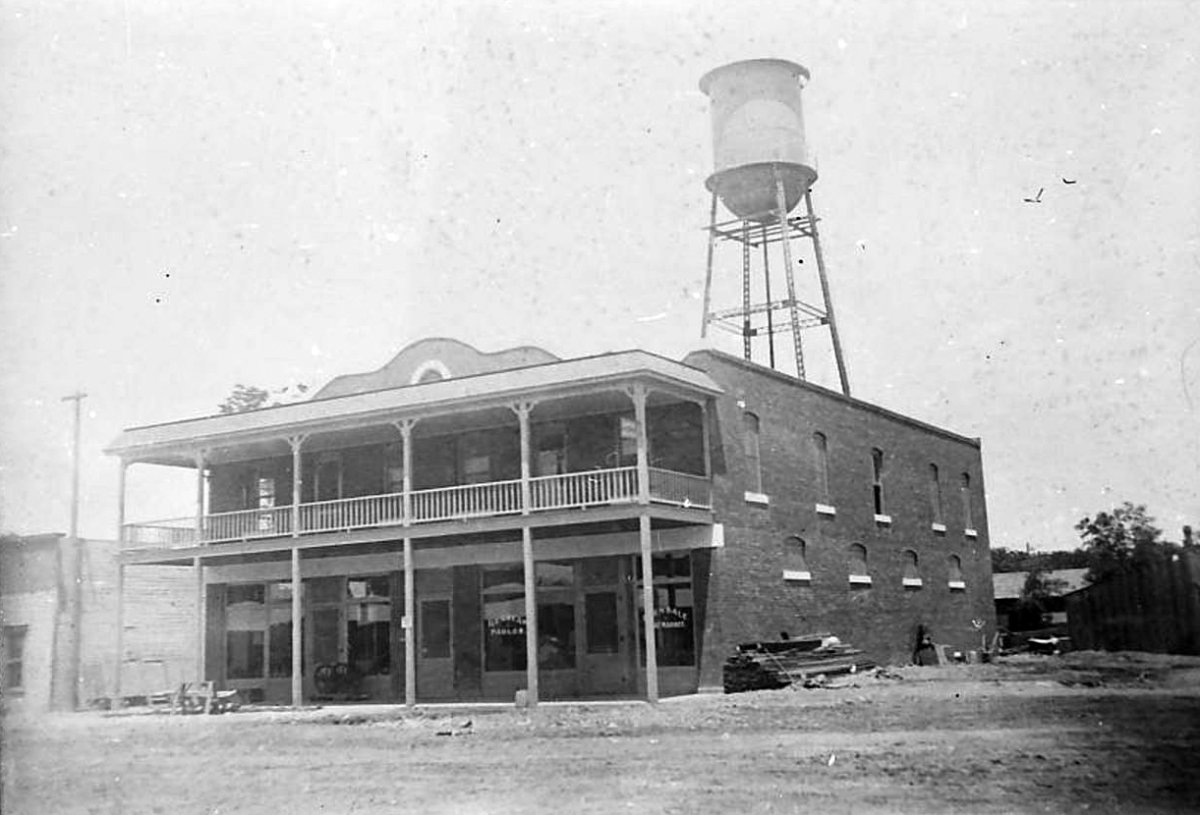 Floyd is also credited with creating the towns water supply. You can see the water tower behind his store, he built that in 1911 and then ran water pipes to the town businesses.

Later the Sine Brothers expanded their business empire , they opened a machine shop in 1916, notice the ceiling covered with shafts and pulleys and drive belts for all the machinery. 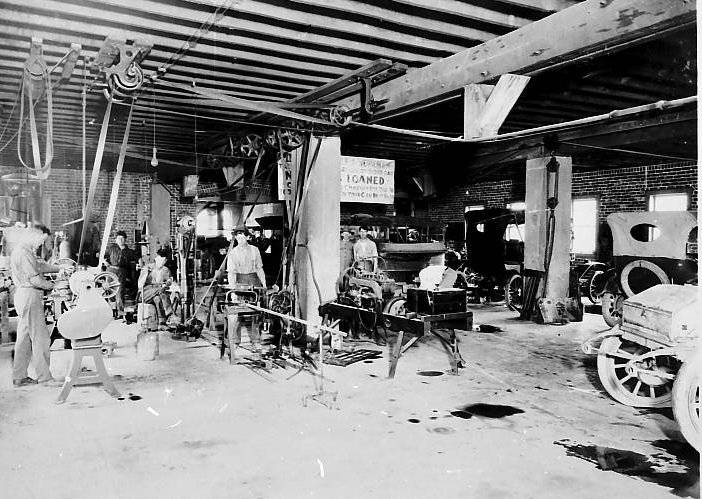 They also opened up a garage. PLEASE DO NOT TALK TO THE MAN WORKING. NO TOOLS LOANED Some old street views from the early 1900’s 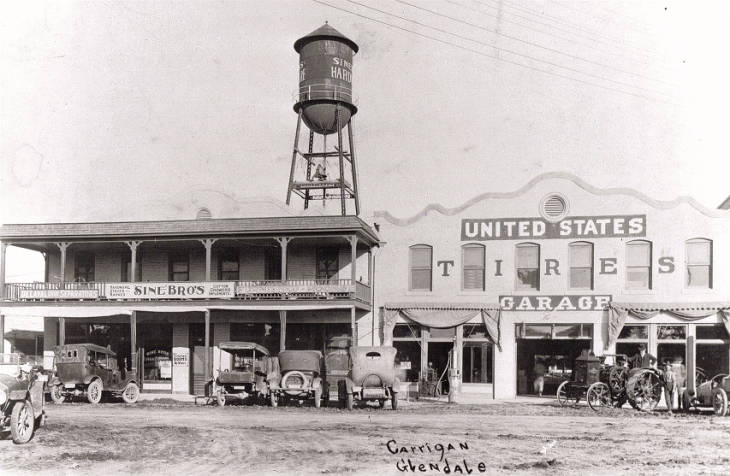 In the photo below, notice the old Firestone business, with the antique gas pumps out at the curb.
The arrow shows Sine hardware. 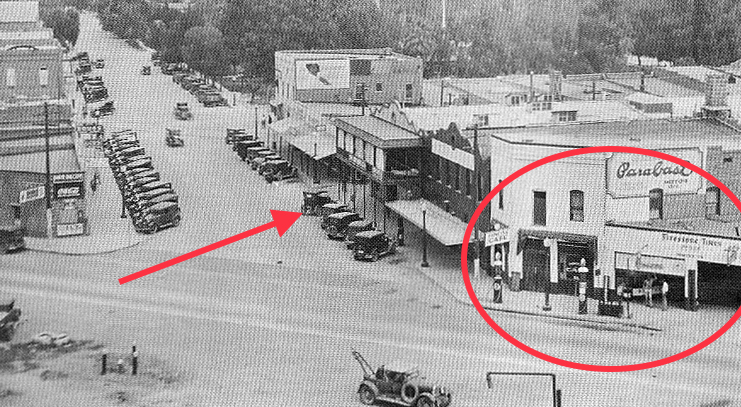 And a few inside the store photos. 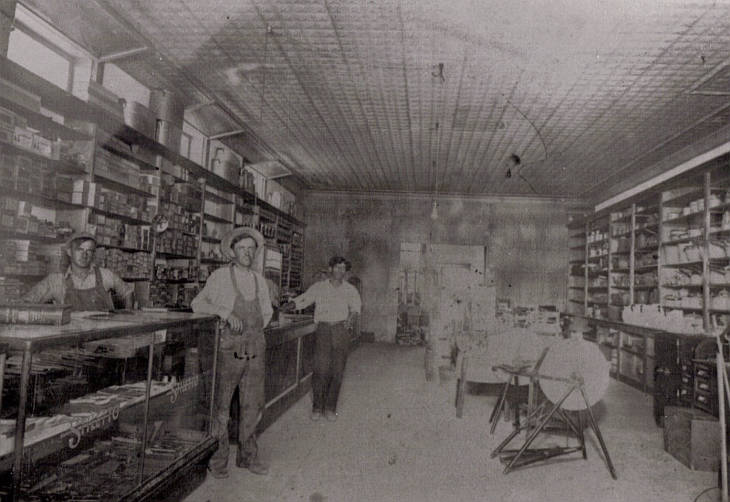 The Sine family could fill chapters in the history of this town. Most people today , I’m sure couldn’t tell you who they were. As I said at the beginning, the hardware store was built to be the first thing you saw coming into town, but all of that has changed. What used to be Main Street is now a dead end, stub of a road. The railroad used to be the primary line of travel, and the tracks are still there, but now it’s just mile long cargo trains going by.
Main Street now comes in from a different part of town, it’s all about cars now. I had to do some digging to figure out where this historic old building was, as I said, a dusty little side street now, no traffic. The surrounding buildings have been torn down and unless you knew the significance of this building , you wouldn’t look twice at it.
Here it is as it sits today. The only “people “ I saw on this street were a couple of curious chihuahuas. Directly across the road from the hardware store / boarding house was this old bank building. Built in 1909 , it was originally a billiards hall, converted to a bank in 1918. I hope some of you found this interesting. It always amazes me when you unearth the history that surrounds you.
As I’ve said, I grew up around here, I’ve spent countless hours walking these neighborhoods. And you drive right by these places and never realize the connections that go back , sometimes to the very beginnings of a town.

In Part 2, I’m going back to 1968. I will try and find some places from my childhood and see what’s become of them.

I notice in one photo of the garage that the “Sine Bros.” name on the building changed to “United States”. I wonder why that happened...? It is nice that the old original building has been preserved in such beautiful condition.

Cheers and thanks for sharing!

The new hardware store looks surprisingly good for a new structure. I don't know where the no value on esthetics of our era comes from.
Last edited: May 19, 2019

Knights Quest to the land of Dragons (© VMCC )