Mailman said:
I have also heard that tale of woe from other early bike owners. The early bike sidecovers are held on by a special bolt. As a safety precaution, I used to give the threads of those bolts a few wraps of Teflon plumbers tape, so that they fit snug in the threads.
View attachment 227333
Click to expand...

Yep, I started putting blue loctite on mine.
L

had to do some surgery. omg im so hoping the bike runs when i put it back together. i have no clue what im doing when it comes to engines.

loosenoose said:
had to do some surgery. omg im so hoping the bike runs when i put it back together. i have no clue what im doing when it comes to engines.
Click to expand...

Well, this is the place to ask dem questions. Have some faith, these are robust and simple engines, look in Tech, and if in doubt ask away. An opportunity to learn.

How she looked in April the day I got her: 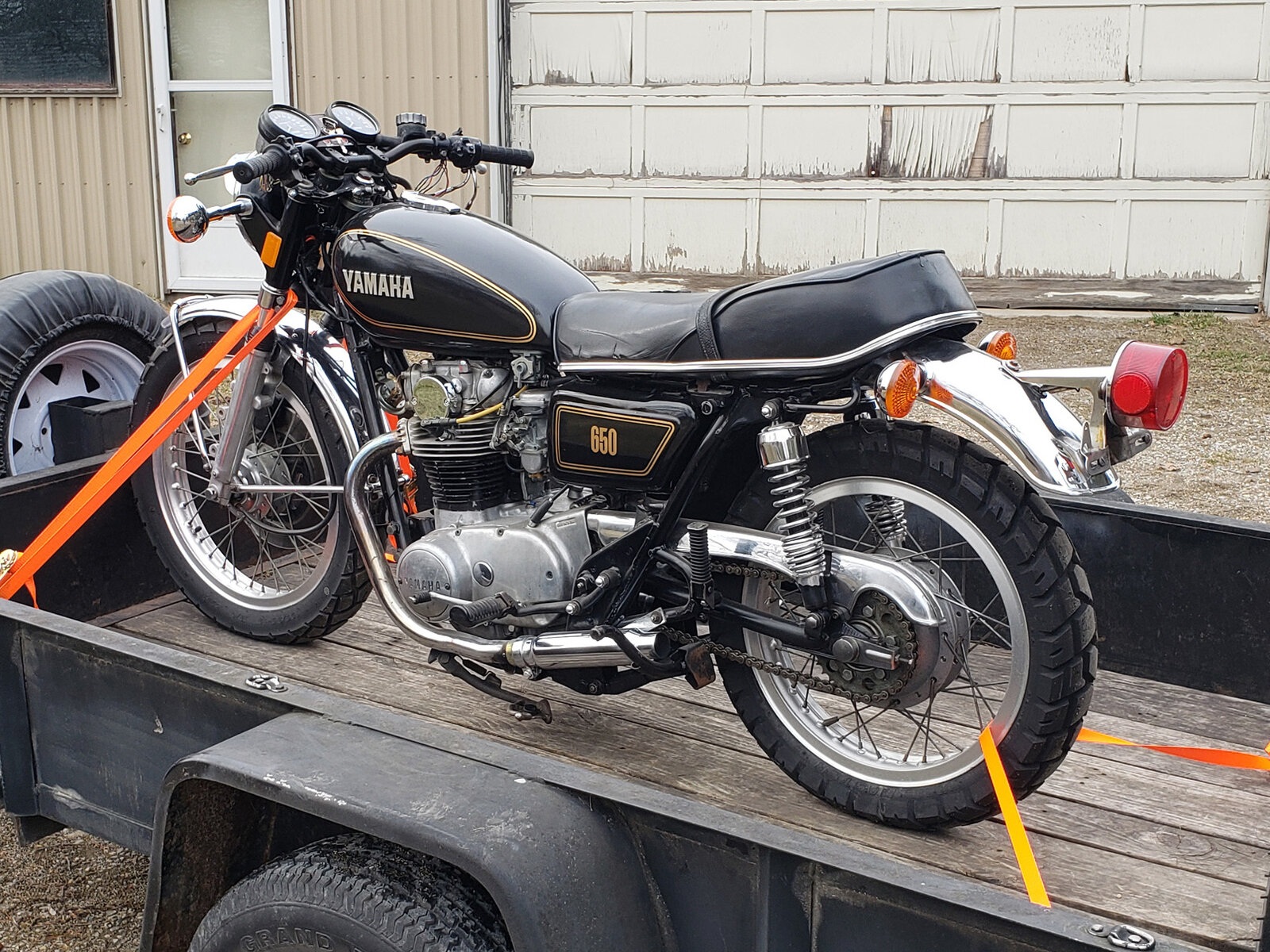 How she looks currently: 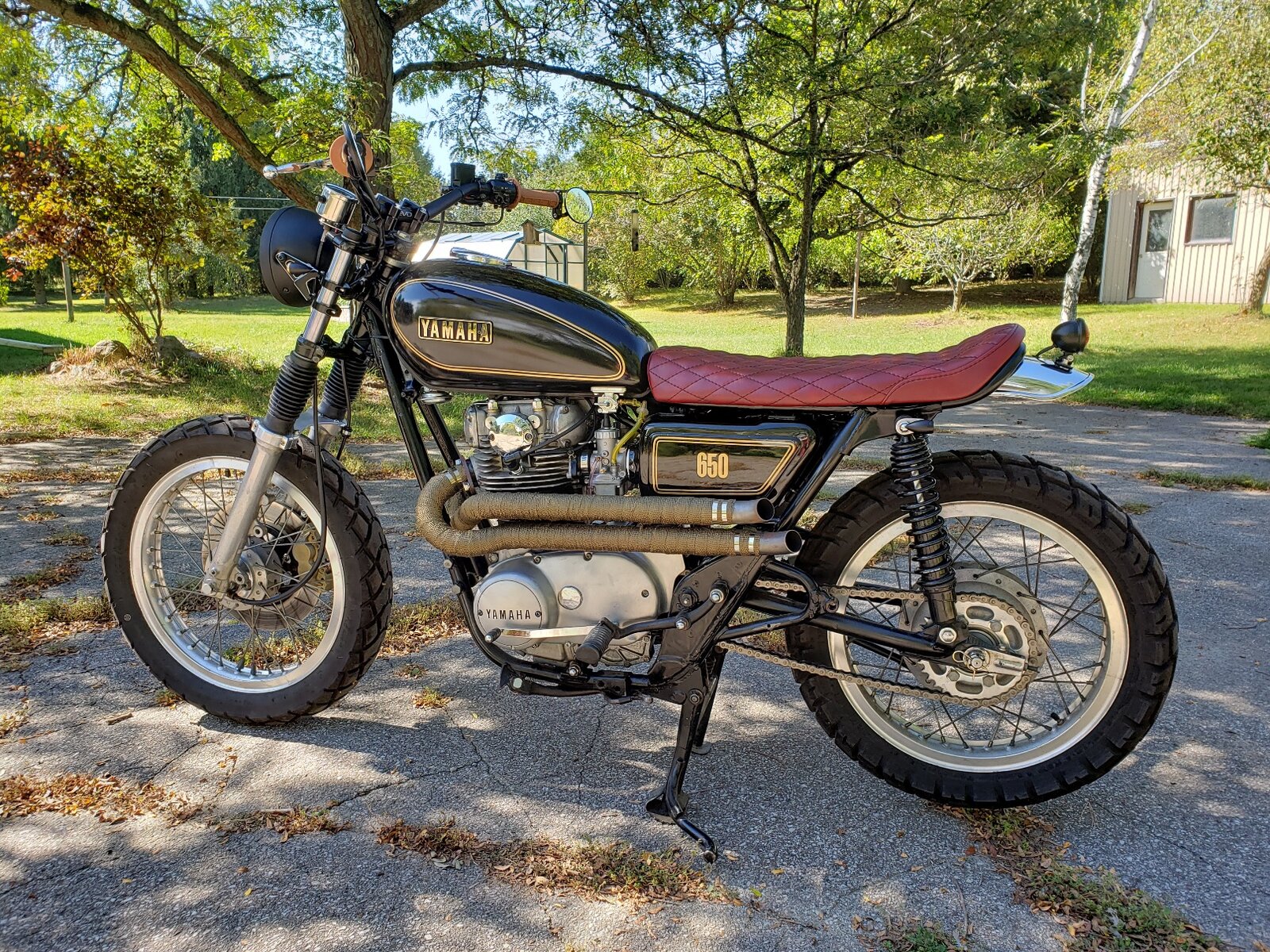 How she looks currently:
View attachment 227379
Click to expand...

Nice touch on the rear fender.

Nice, but can I have the round rear lamp please?

I was out and about yesterday on the Special 2 (1981), and it occurred to me to take a few current photos of this machine and post them here, as it had been many years since the last ones. I bought this bike brand new in December of 1981 - picked it up from the local dealer on a very, very cold January day and rode it home - thankfully a very short distance. I outfitted it with the Quicksilver fairing in the spring of '82. Over the years I've added numerous other modifications to better suit me and my type of riding. I have taken this bike to the Ozarks rally numerous times, and made it to the Smoky Mountains in 2021, where it acquitted itself very well on the Foothills Parkway, Tail of the Dragon, Cherohala Skyway, Smoky Mountains National Park, and a bit of the Blue Ridge Parkway.
Yeah, that's an electric tachometer - jury's still out on whether I like it or not - original cable driven meter had gone totally wonky, so I thought I'd try electric - accuracy and response is great - needle damping leave a tiny bit to be desired. No original items were damaged with that mod - parts that needed mods (main mounting bracket and pilot box) were sourced from ebay. Air core gauge movement leaves needle placement near indicated engine speed at the moment it was switched off - does not return to zero - takes a bit of getting used to. 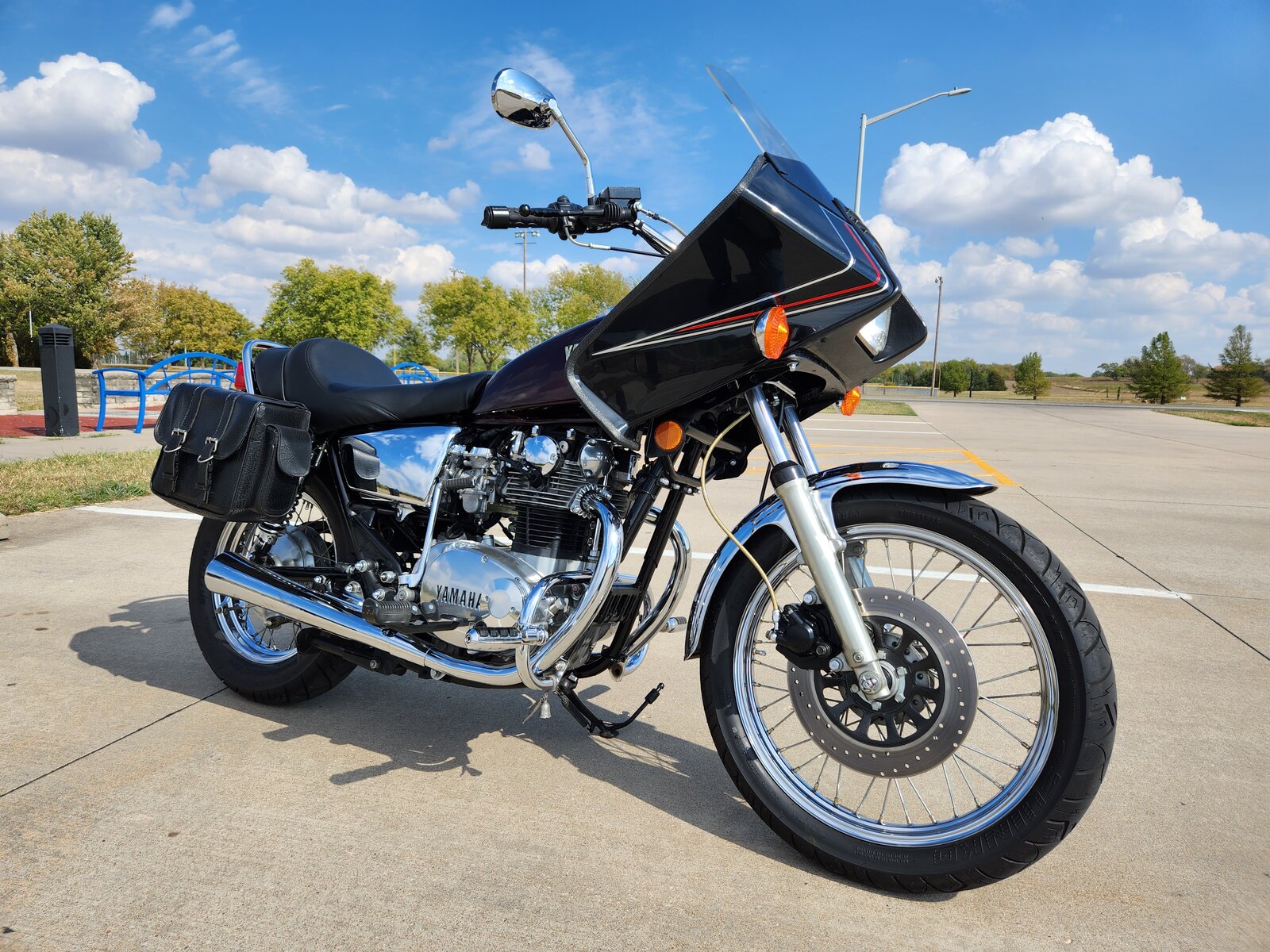 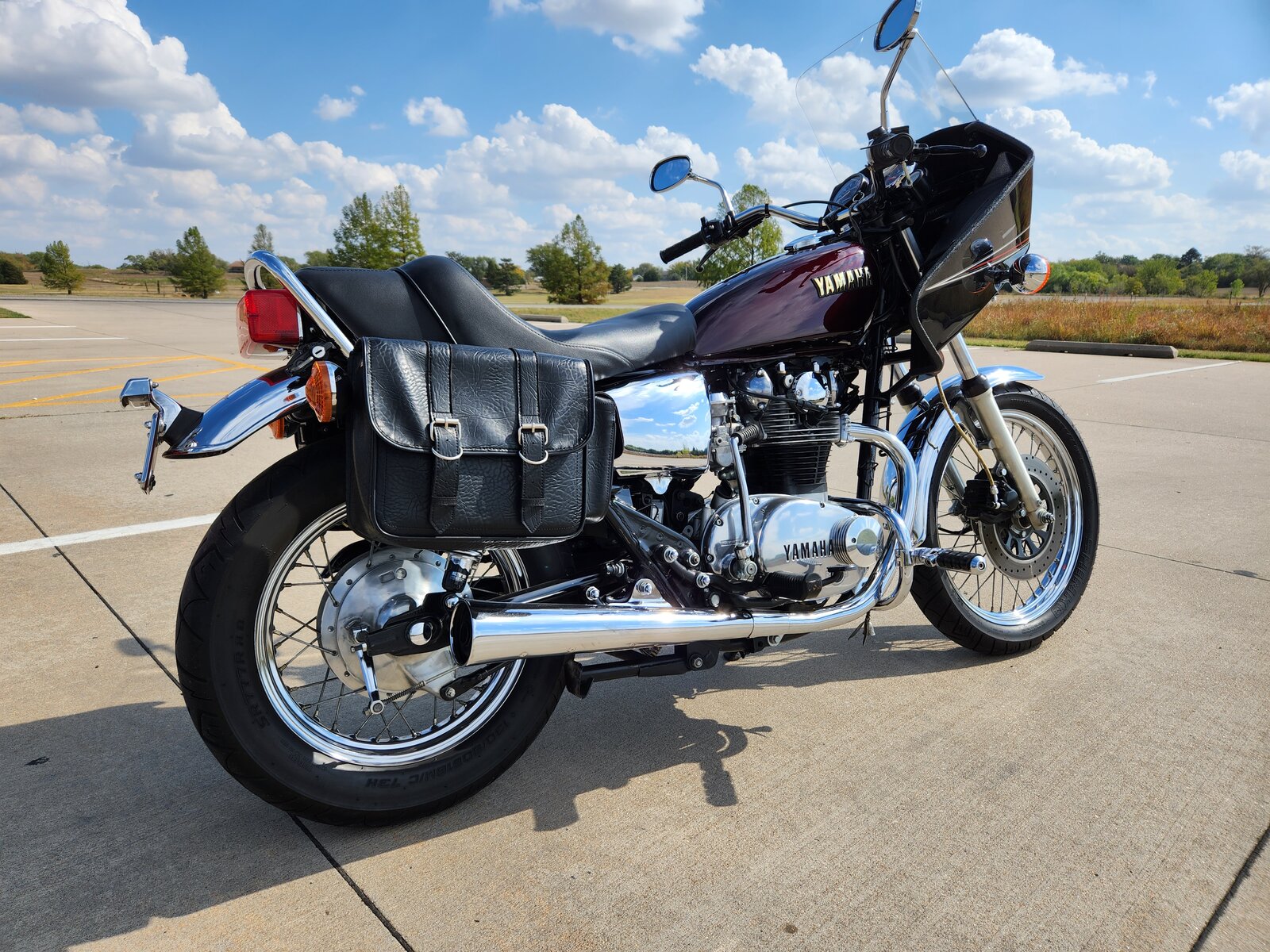 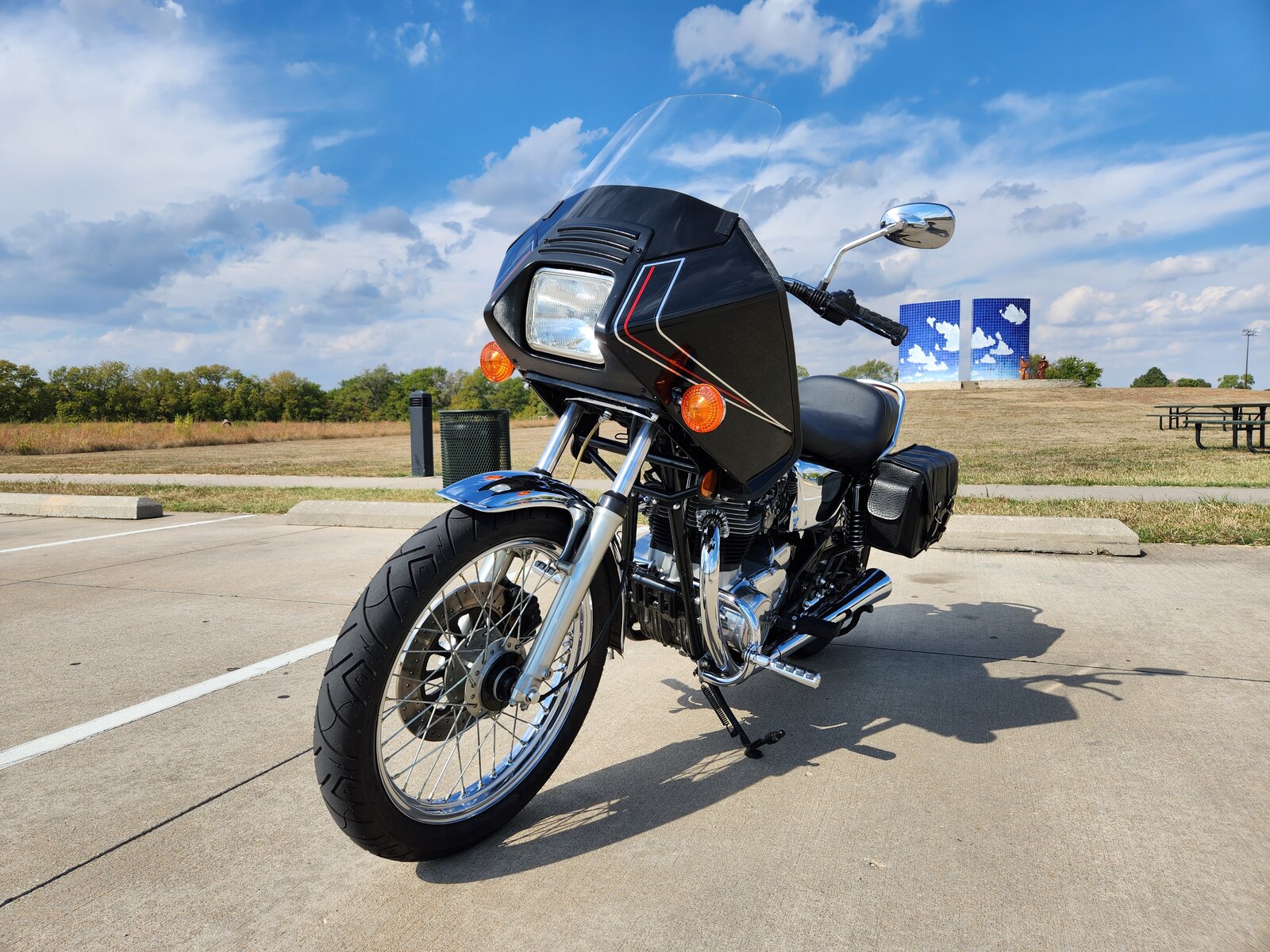 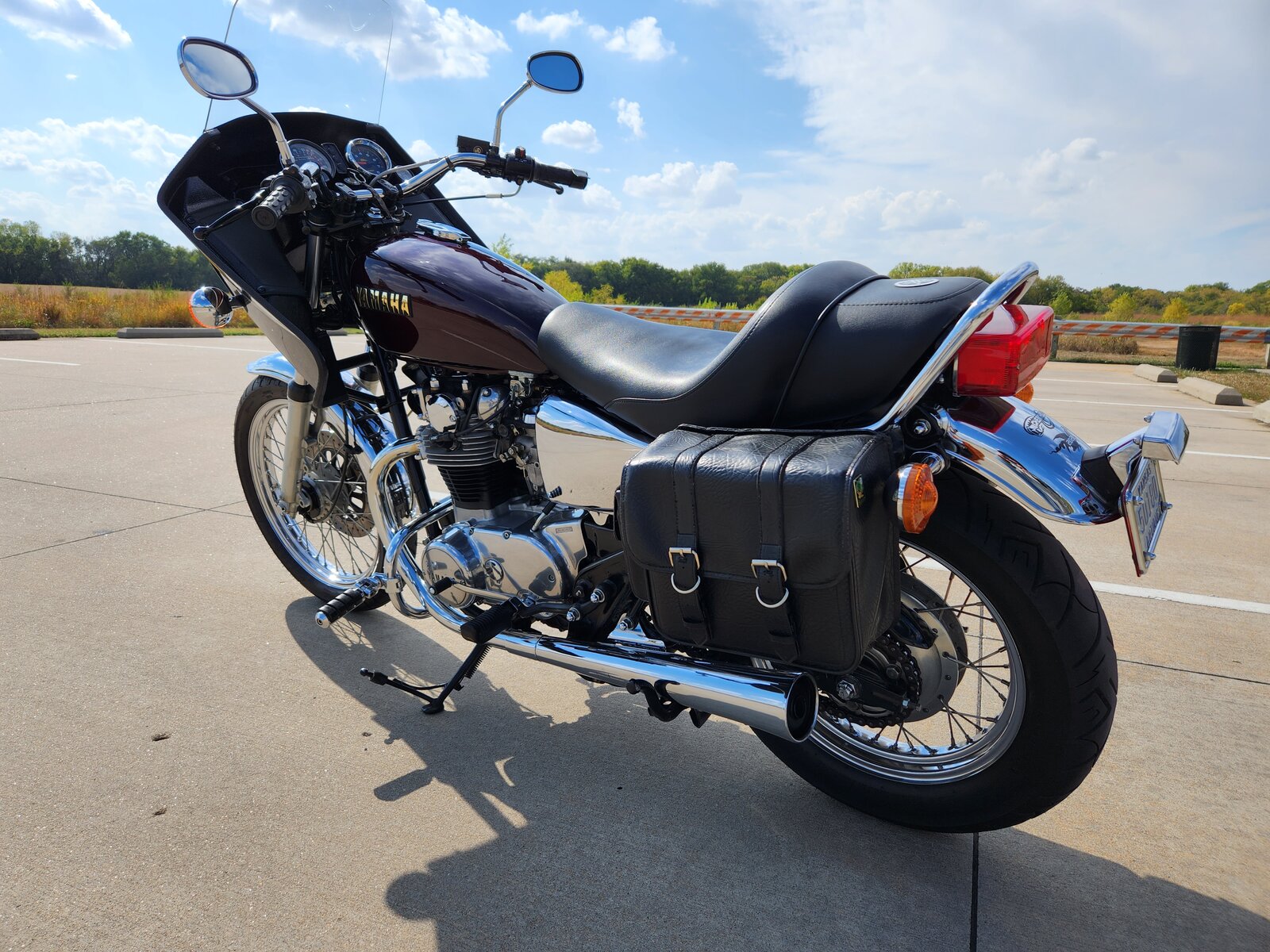 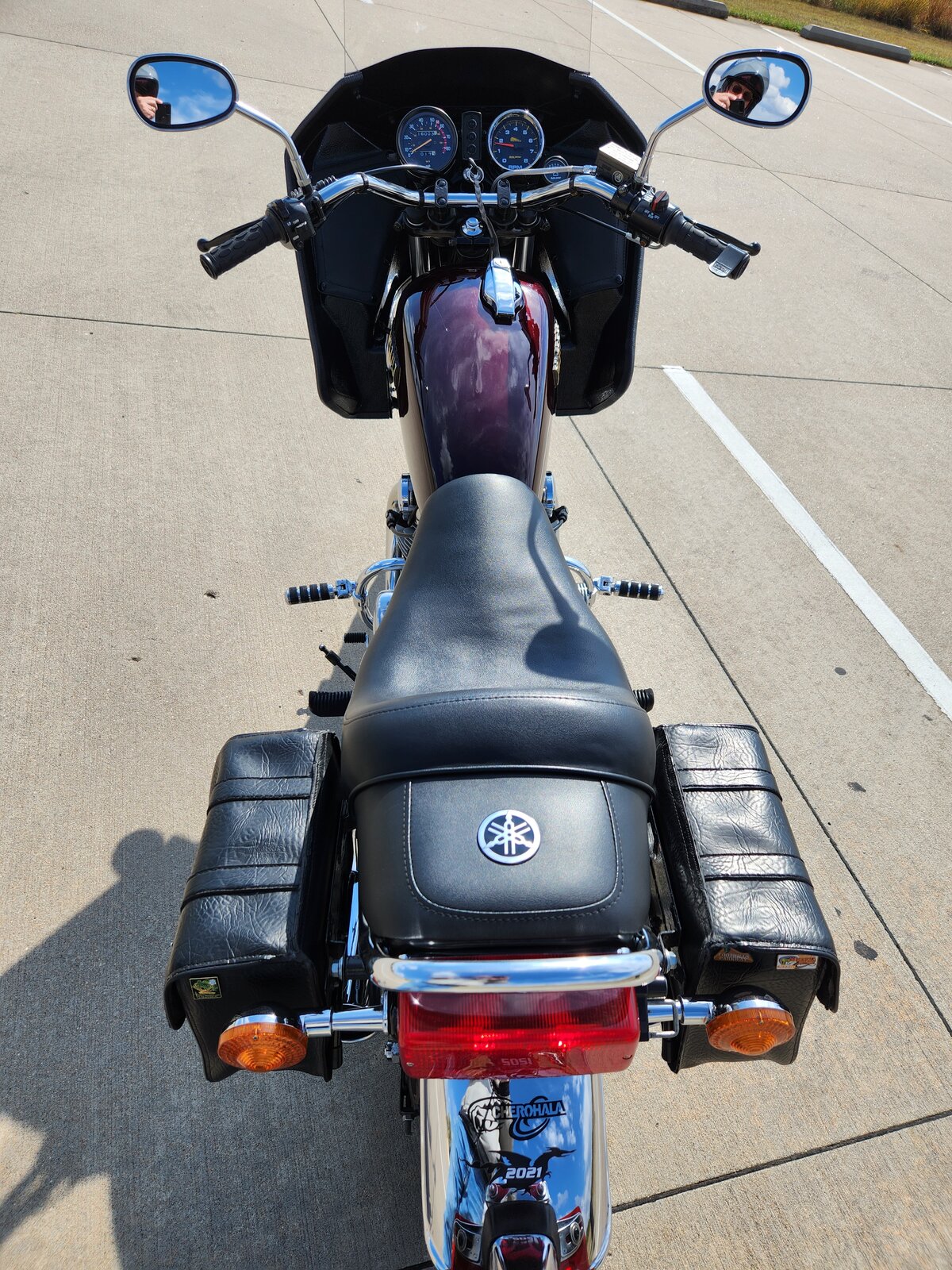 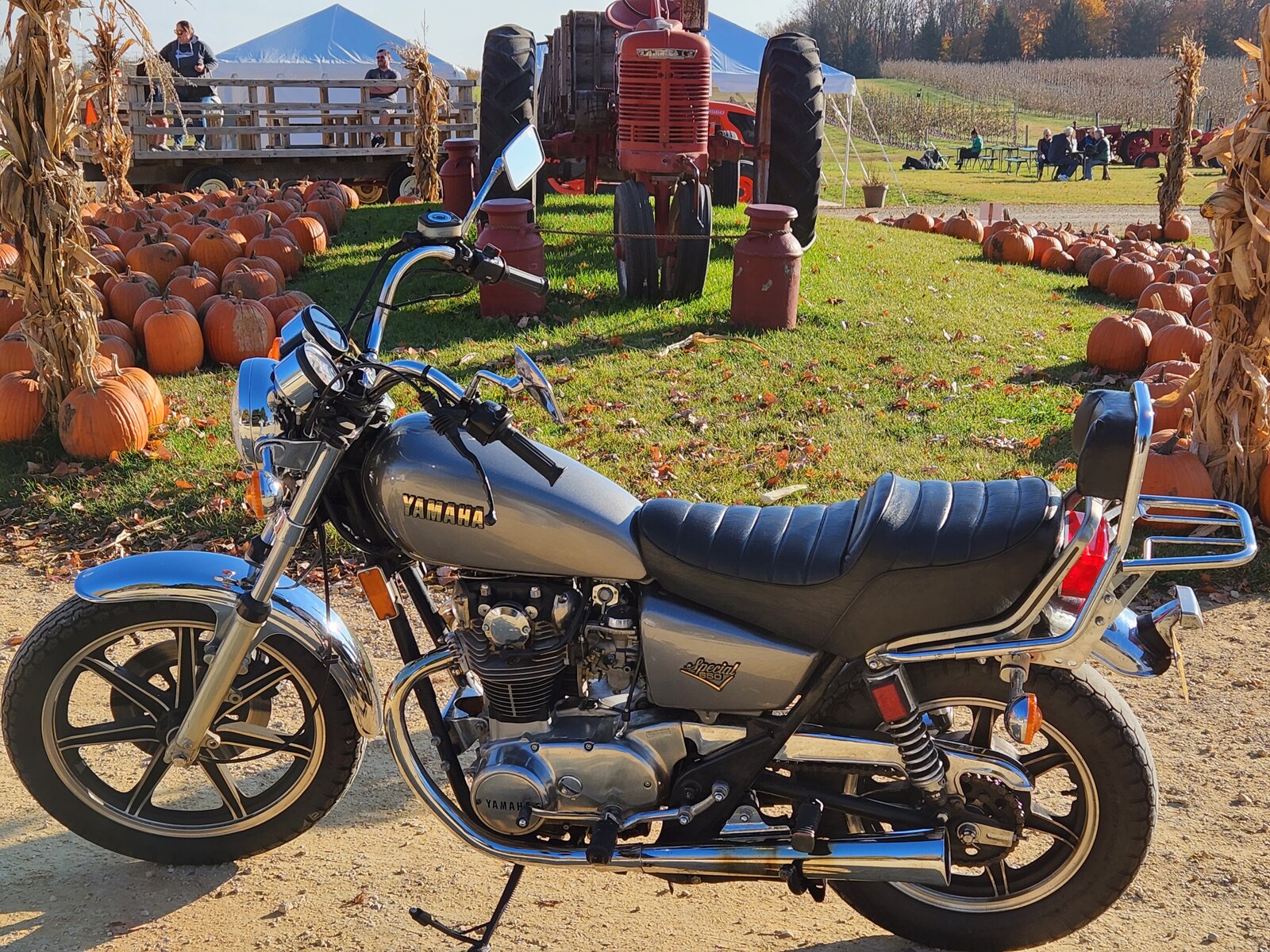 Two of my favorite things, a fall festival and a motorcycle! 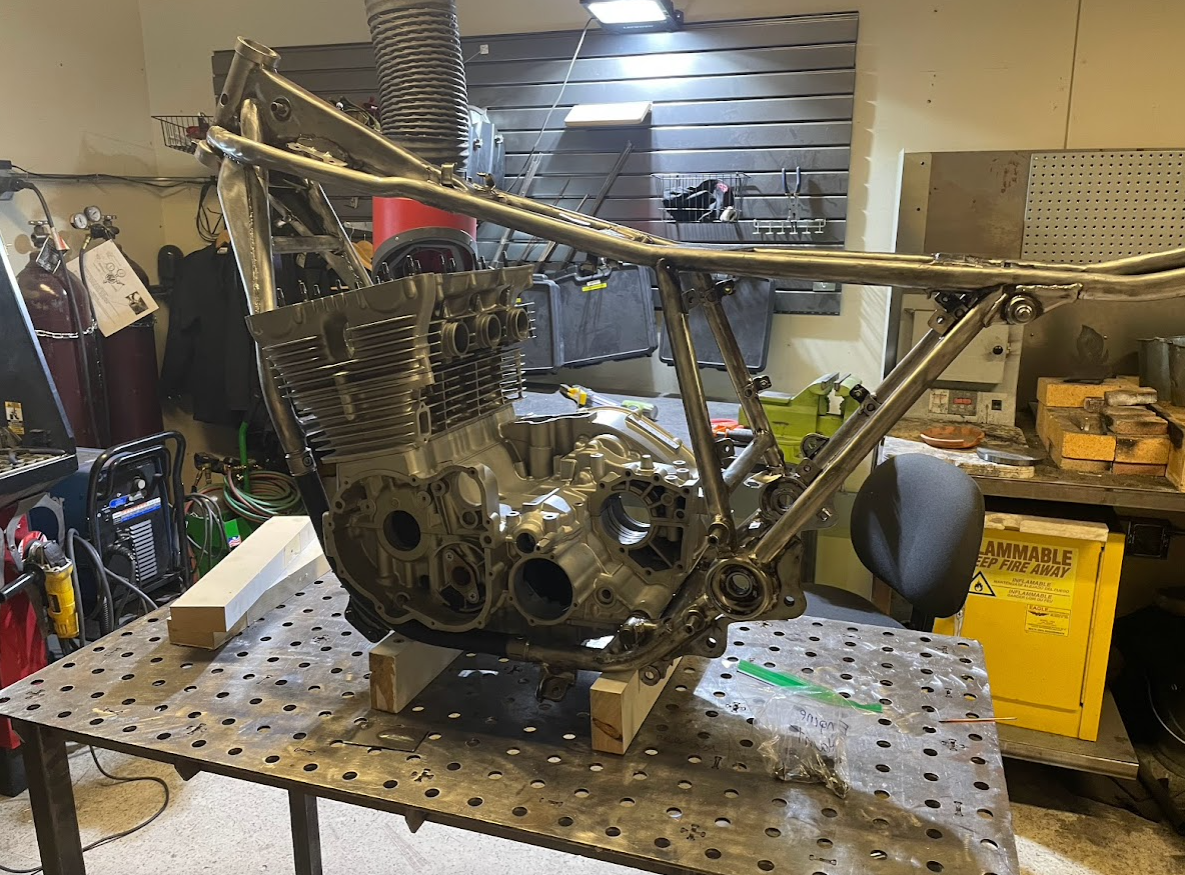 2 tubs full of parts . finally turned into this

Thats a beautiful bike! But C’mon now, we need to see some glamour shots of that beauty! Maybe a little back story.

thanx for all the thumbs up on the bike everyone. back story is it was a half molested scrambler that ended up in the too hard basket. some fukkers should never touch mechanical things. i needed a workshop manual so i bought 1973 barn find tx 650 that i got running and ridable. the rear foot peg mounts were cut off seat latch was cut off .total stip down blasted the frame re welded foot pegs mount back on . bought ab ox full of bits from mikes xs thanx to ggg gaz he posted them to me here in oz. then ratted the parts off the tx that i was missing . as you all know a whole lot of chroming polishing and rebuilding starts. i sprayed the frame 2k black .candy apple red and white on the tank and side covers i like the early xs paint design so i went that way. the parts i couldnt find or buy i made myself. i used the old wiring loom that was in good condition changed it somewhat to clean it up theres a lot of shit that isnt needed in the loom. the motor was supposed to be in good condition with new rings .i thought that was a positive when i fired it up it pissed oil out of out every where all the head bolt werent torqued to spec re torqued the the nuts sealed the valve cover gaskets sweet as now . i rebuilt the original carbys .it runs dunstall mufflers with aftermarket air filters. b38 standard jetting 1 notch richer on the needle from the center position nice color on the plugs no hunting on the highway. anyone wants to know the differences between 1972.xs and 1973.tx i can tell you everyone of them and theres bloody plenty of them. as for glamour shots you better educate me. cheers gary. thats my real name.

Gary just take a few pictures of your bike and save them (import them) to a file from your phone
I import them to my pictures file
Then go just below your comment to reply
You will see the icon that says attach files and click on that
It should open up the file with your pictures click on a photo and then at the lower right hand side of the folder click enter and your photo should load onto this webpage
Others will be able to give you screen shots on how it's done
That I have no idea how to do that
Good luck
Last edited: Nov 13, 2022 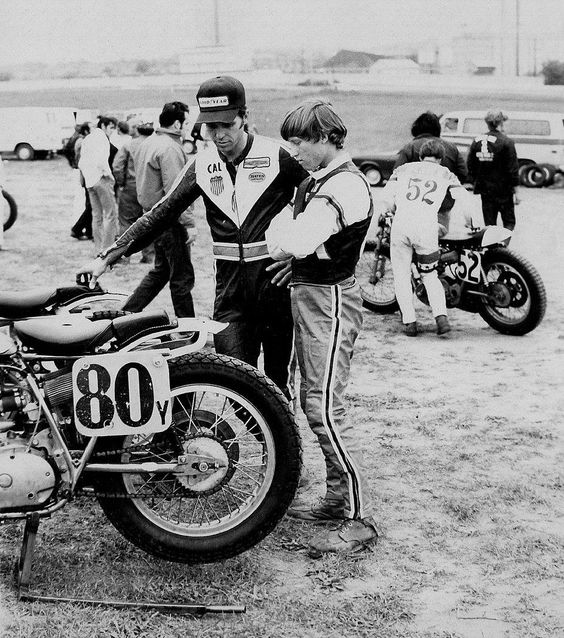 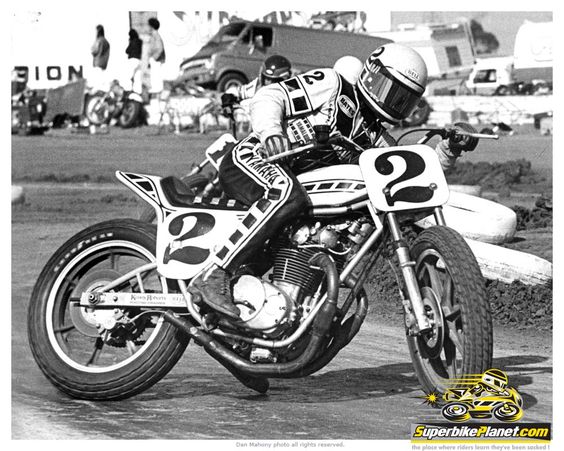 B
Thanks for the warm welcome!