Edit:The end result of this story is on page 7 + 8, in short, Marbles Motors installed the first liner, it failed, then screwed up the warranty repair and denied responsibility. See for yourself on page 7 + 8. He also shipped my tank to the wrong address, I was lucky to get it back.

Edit #2, The tank liner literally melted and ruined my motor, requiring me to rebuild my fresh motor AGAIN. . Here’s the link to that thread,
http://www.xs650.com/threads/mailman’s-xs2-the-drama-continues.58865/#post-674646

Edit #3, Two failed tank liners rendered my original tank unusable, it took me a long time and considerable expense to locate another early gas tank and have it painted.

My XS2 restoration thread is so darned long, I decided not to add this to it. I think this deserves a stand alone thread. So the quick backstory here, for those that may be unfamiliar with my bike, is this, in March of 2018 , I sent my tins to Marbles Motors in Oklahoma to be painted and have the tank lined, because it had significant rust inside. The tins were returned to me in May of 2018. I had originally anticipated getting the bike up and running in a few months, but plans changed and a full restoration had begun, so the tins were stored in a cabinet and never had gas in the tank until April 2019. Unfortunately I never thought to take any photos of what the new liner looked like, but it was a uniform dark grey in appearance.

Which brings me to the point of this thread. Approximately one year of riding had passed and around April of this year, I noticed the tank liner was changing appearance. The uniform grey appearance was taking on blushes of rust color and pin points of rust could be seen coming through. Photo from then, 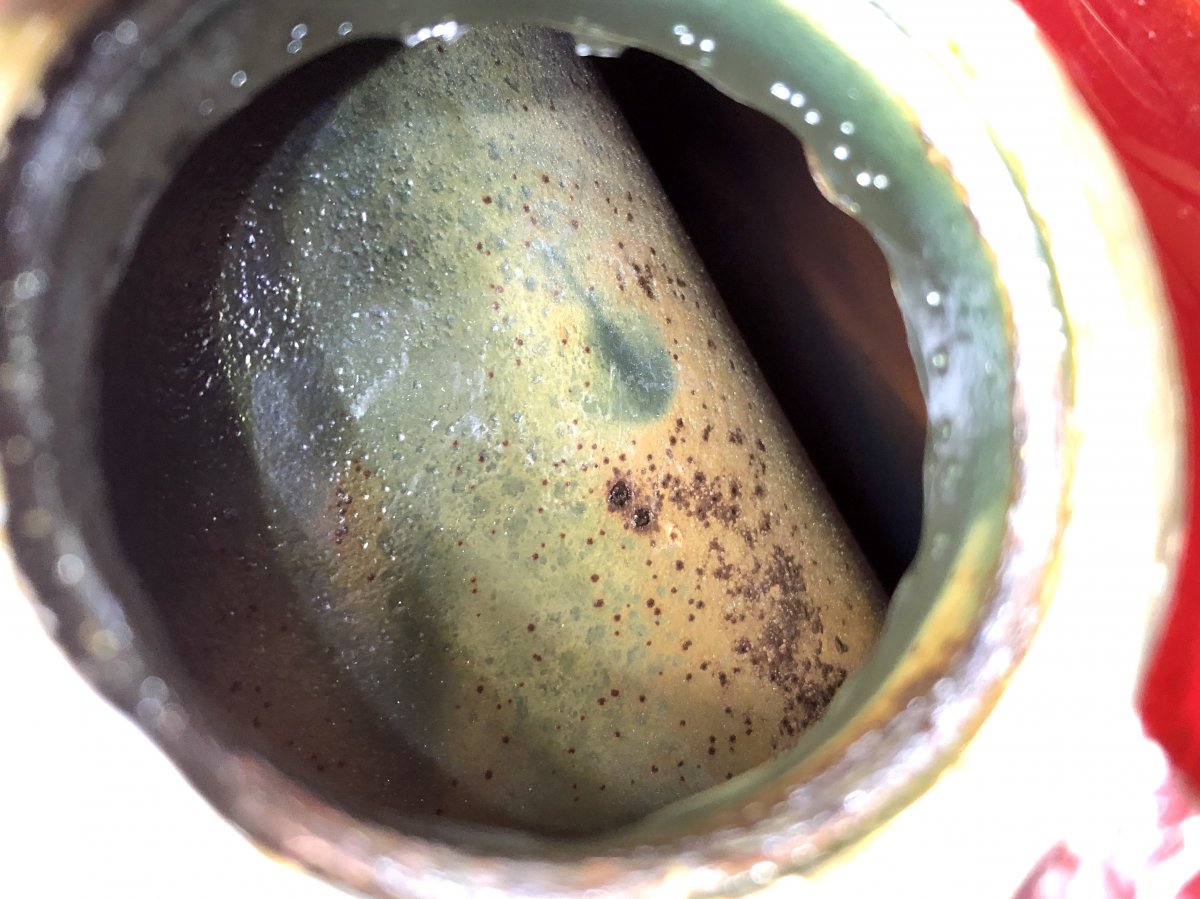 I began paying close attention to it and it was rapidly progressing, within a few months it looked like this, 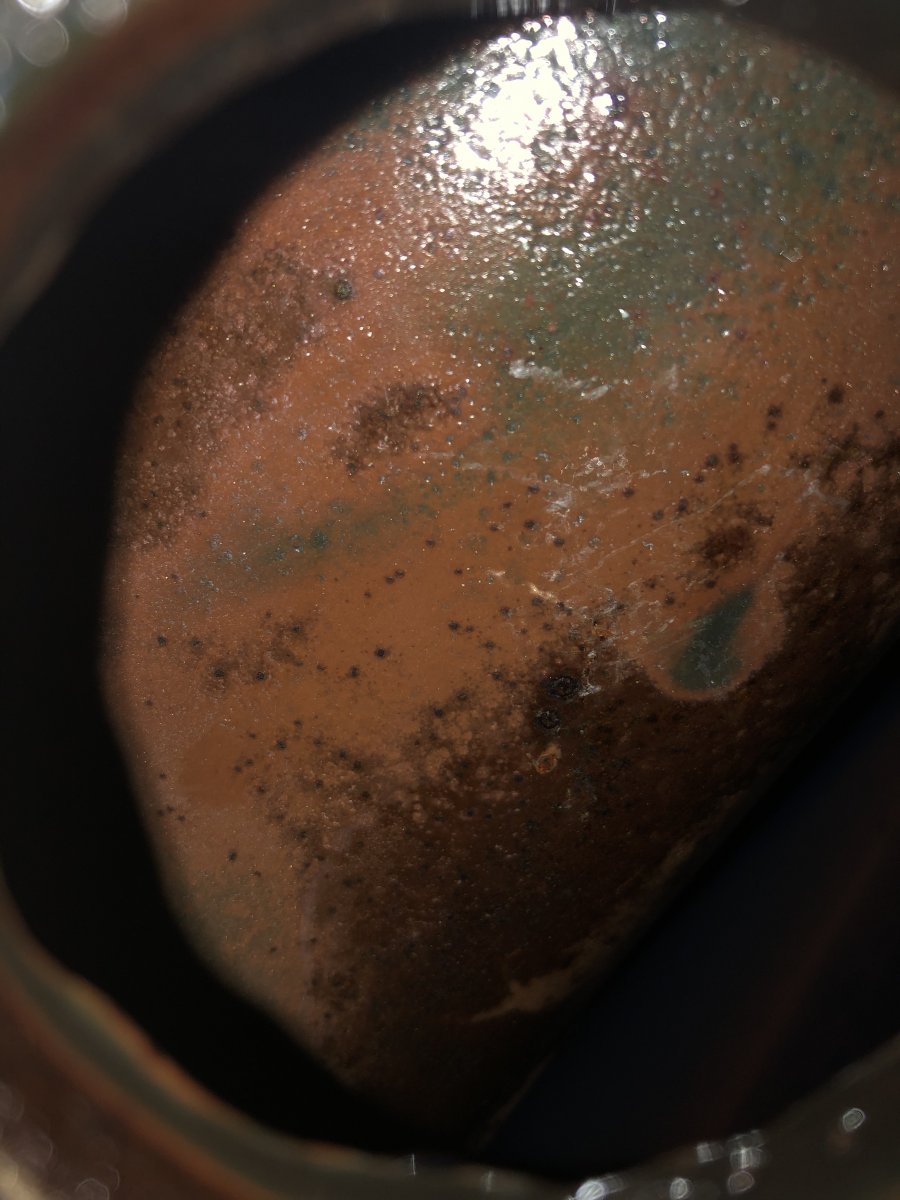 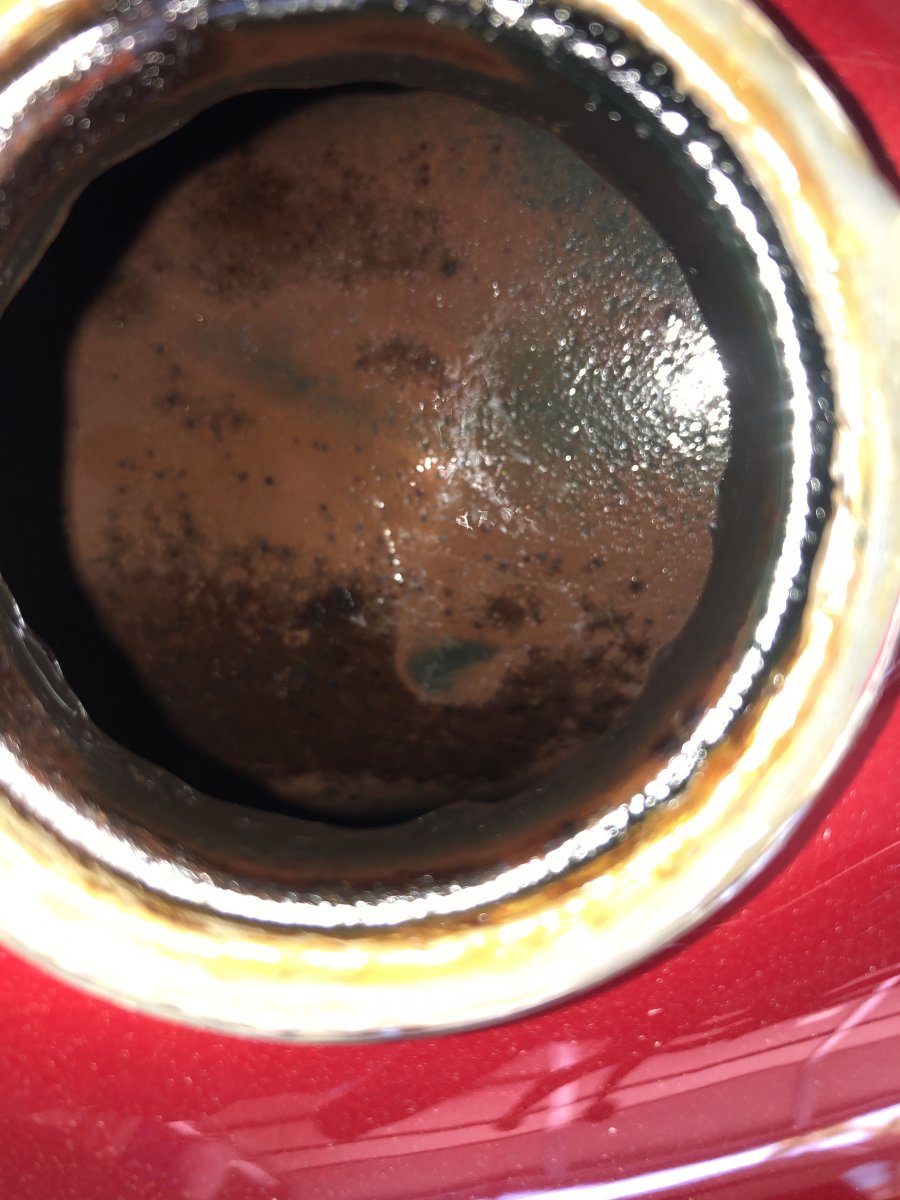 I was still riding the bike periodically, ( it was summer by now and too hot to ride much) the last time I had the bike out a couple weeks ago, it wasn’t idling well, and screw adjustments only made it cough and pop. I think my carbs are getting gunked up from the tank. I stopped riding it and started thinking hard about how to resolve this. I contacted Marty on the forum to ask about a tank liner he had removed and replaced, and was making plans to do the same. I knew it would take some aggressive chemicals to dissolve that old liner and prep for a new one and that gives me some pause. I have pretty bad asthma that was made worse in my working years by chemical exposure and I’m pretty sensitive to them. Even wearing a three stage respirator, it always seems you get some exposure.
At about that time I thought I’d send an email to Marble’s Motors and just let them know what happened, as a warning for future customers. I didn’t bitch about, and I didn’t ask him for anything, I just thought he’d appreciate the feedback. I didn’t expect to hear back from him, frankly he was kind of crusty when I did business with him in the first place. But he did respond, I sent him the above photos and he said he couldn’t understand what had happened, he said they’ve done hundreds of gas tanks like that and never had a failure. He surprised me by offering to redo everything, strip the tank, remove the liner and repaint it, all at no cost. We agreed to split the shipping, I pay to send it to him, he pays for the return. Considering that his work was now two years old, I thought that was a generous offer.
So I pulled the tank and drained the gas, it came out brown tinted. Then I flushed the tank out numerous times with hot soapy water, and every time the water was rust colored. After it was all cleaned out and dry, this is what it looked like, 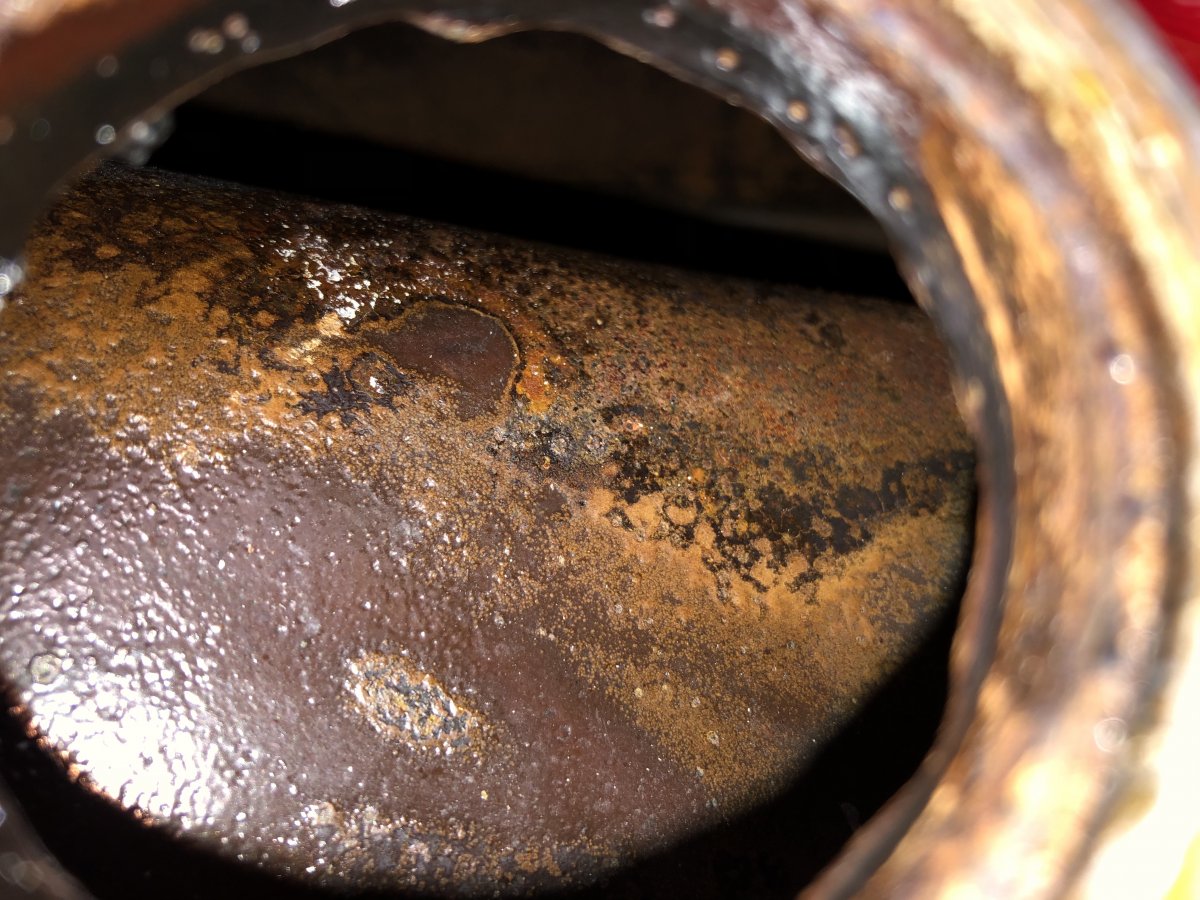 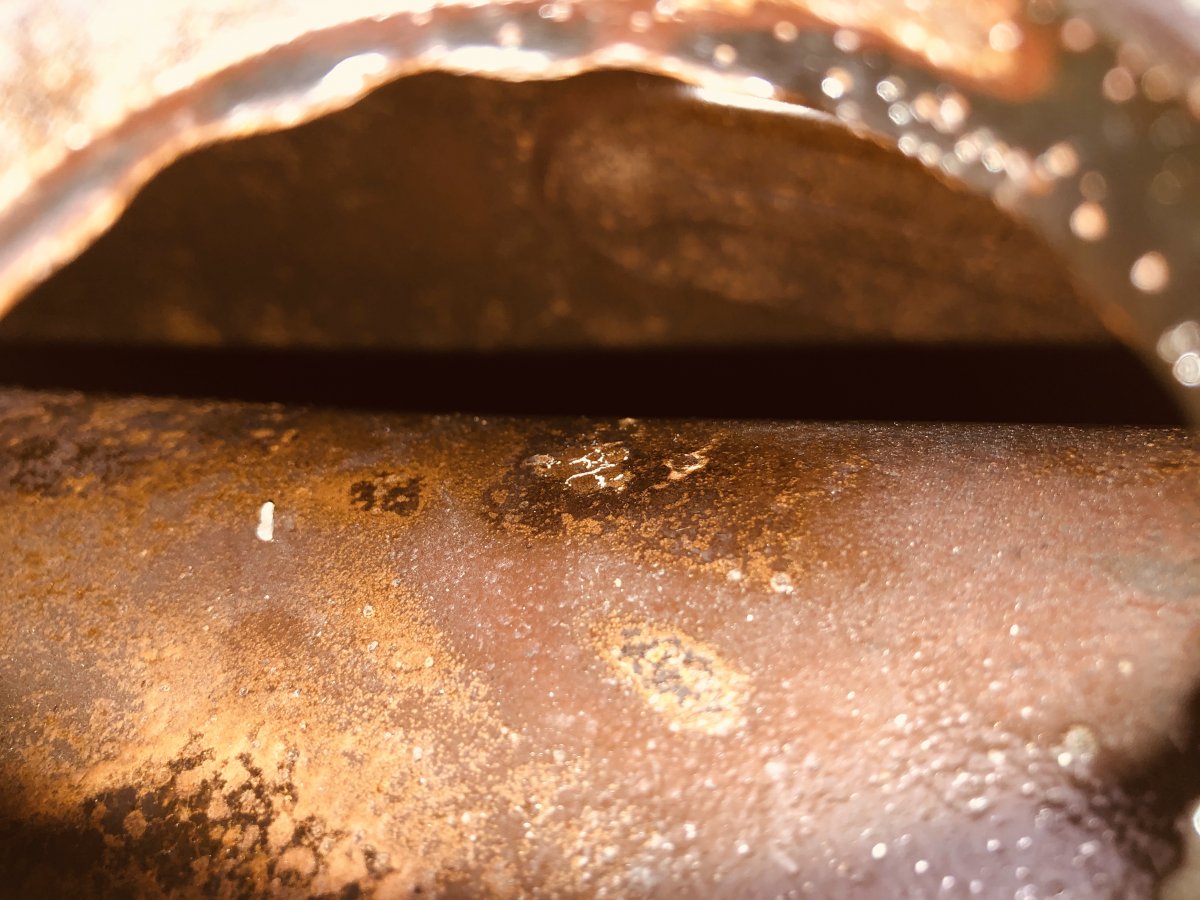 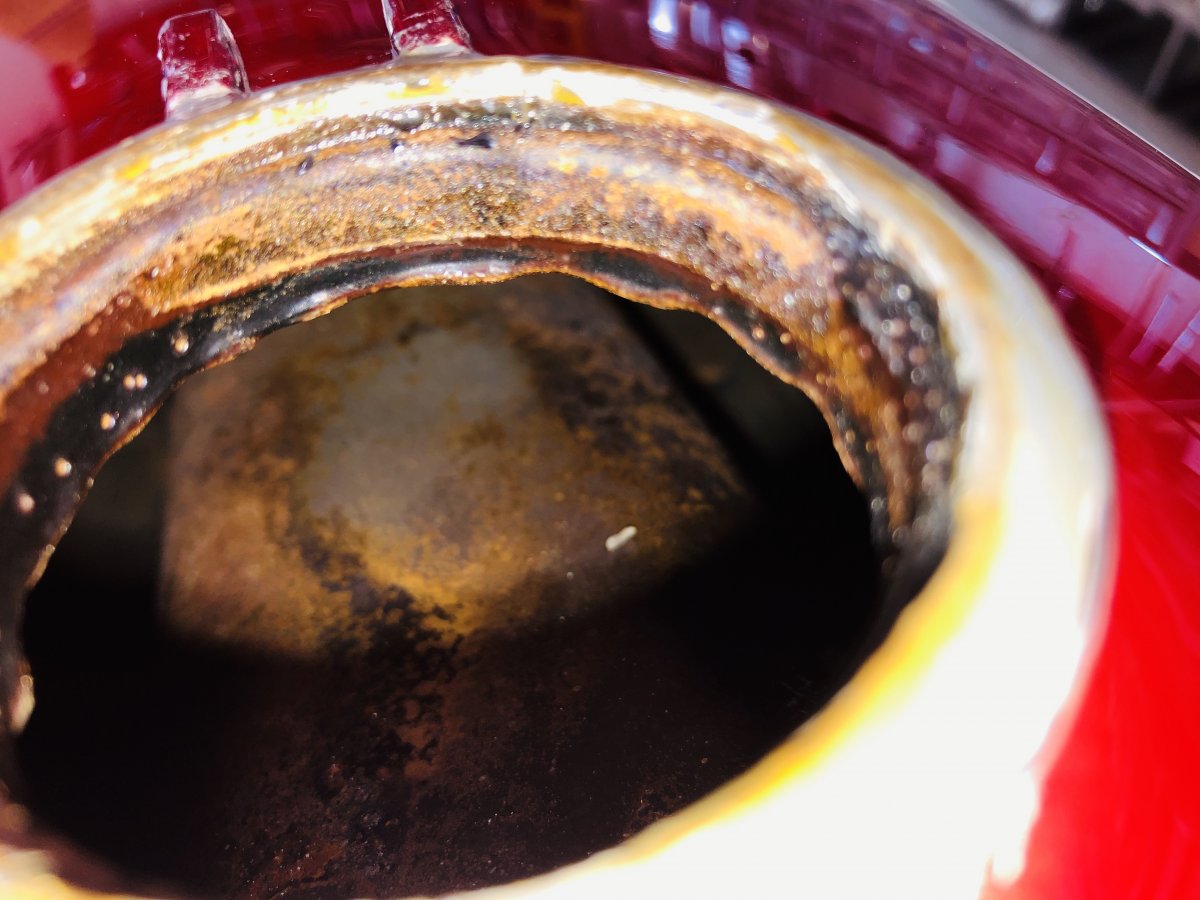 You can reach in there and scratch the rusty crap off with your fingernail. Yesterday, I packed up my tank and shipped it off to Marbles. I have no idea when I will see it again. I don’t think he was real happy about having to do it over, I figure it’ll go one of two ways, either he’ll put a rush on it , just to be done with it. Or he’ll say “paying customers first, work on this when you’ve got time. “

I’ll follow up here as things progress, hopefully before the end of the year.

Just that he took it back is a very positive move.

Successful tank lining comes down to 3 things, preparation, preparation... preparation.
That tank wasn't properly de-rusted.
Reminds me of what Caswell claims about their tank liner system.... 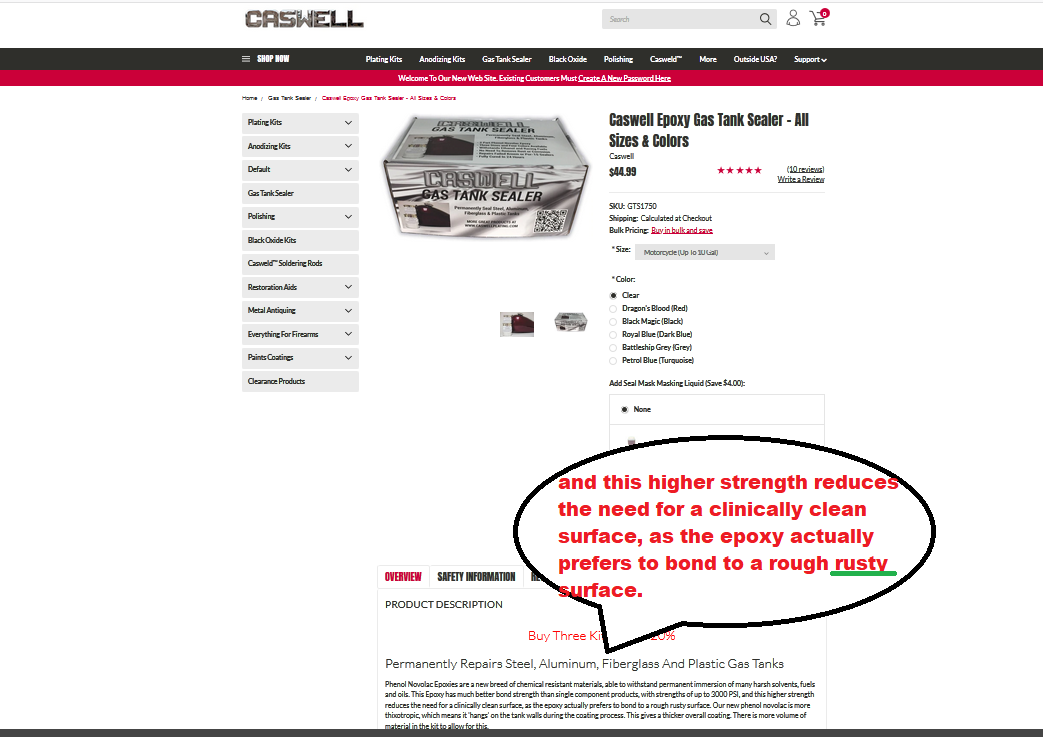 Anybody believes that... I gotta bridge in New York that I'll sell ya real cheap.

I wonder what brand of liner that was? I've had my own bad experiences with RedKote that was professionally applied.
Caswell coated tanks still look good

Anybody believes that... I gotta bridge in New York that I'll sell ya real cheap.
Click to expand...

Yes, I use Caswell, but I prep like I'm using Kreem. I have a friend who .... let's just say you wouldn't want him working on your bike. He put Caswell over the liner that failed.. He cleaned it, that's all. It's been a few years and still holding. Yep, I'm surprised.
6

Tank liners are Dodgy at best and I can't understand why anyone would guarantee
them in these days of Ethanol and who knows what in the Gas ? that is sold today.

650trader said:
Tank liners are Dodgy at best and I can't understand why anyone would guarantee
them in these days of Ethanol and who knows what in the Gas ? that is sold today.
Click to expand...

Agreed. I had to do a lot of digging to find this. Arizona sells what they call Cleaner Burning Gas, it’s more than just alcohol mixed in there. Check out this toxic stew! 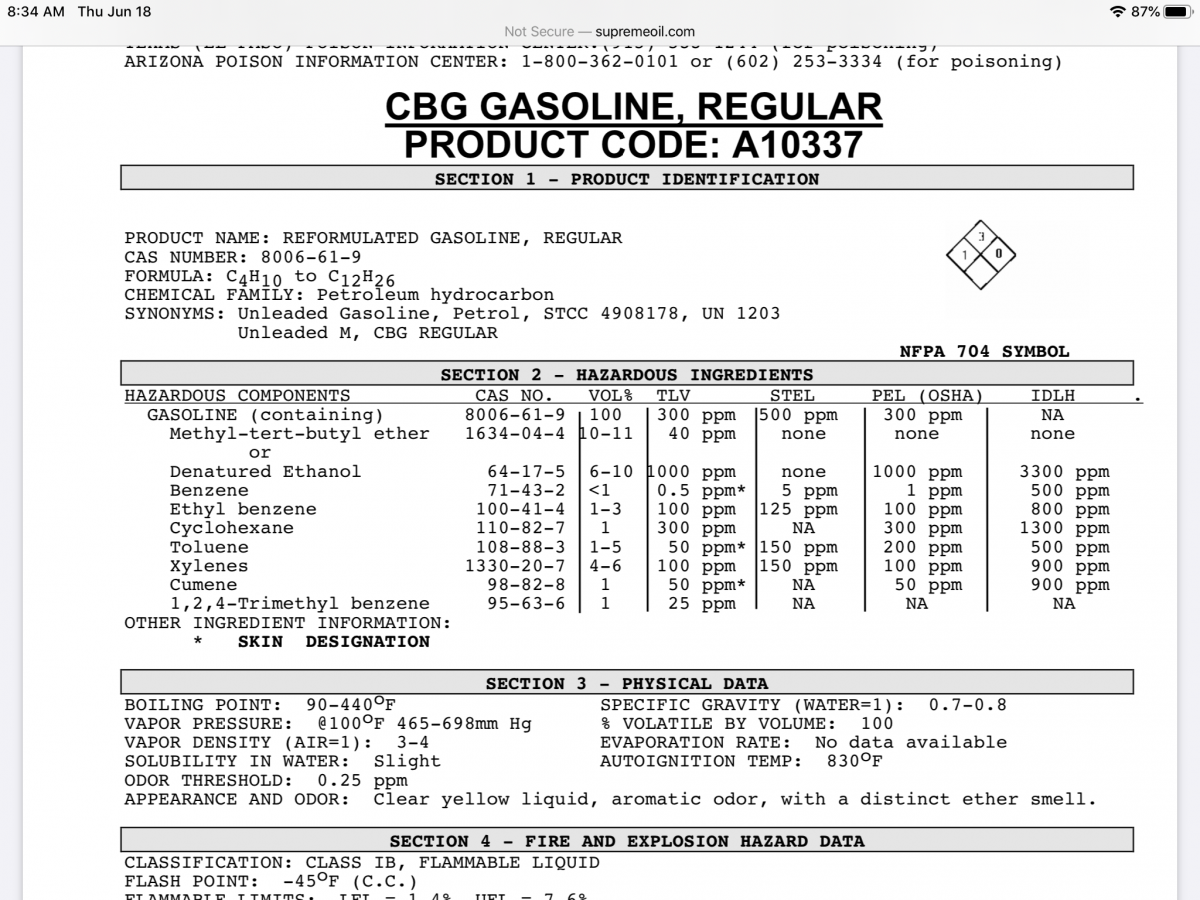 Here in Mississippi, it's rare that I can't find ethanol free gasoline. 87 octane E0 seems to be all over the place. Lucky me!

Last I looked there were close to 600 stations in NC that sell ethanol free gas..Not all of them are top tier tho'...

FWIW, I've lined several tanks using Por15. One tank was rusted quite bad (XS1100), and used electrolysis extensively to clean it up, then metal prep that comes with the kit, then the tank lining. As Jim stated, prep is everything. So far the tanks I've done have held up really well. One XS that I lined is going on near 4 years. Still looks like the day I lined it.

I really hope that Marbles does a better job this time, Bob.
I agree with Jim/2XSsive, its all in the prep.

But altho I did accomplish one successful liner job, the tank on my '69 Bonneville (Kreem),
I'll never do another unless absolutely necessary, cuz I've come across too many fails.

Looking forward to a positive resolution to this situation

I spilled some Caswell on the garage floor a few years ago. I will probably need a chisel to get it off.

Indeed Bob I hope you can get your tank issues resolved...My tank is clean as a whistle...no rust and no liners...

Can you find out what product they used. I have Por15 and its been 10 years since done.

Bob, that looks similar to my failed liner, Northern.

If I could choose, I would probably go with Caswell, when I thought I would have to repair this myself, that’s what I was looking at. Unfortunately, this being done as warranty work, I don’t get to choose. They send the tanks out to a third party for tank lining. I was told it was a 3M product, but that’s all I know.

My tank has a Caswell lining. It was sealed and painted and sat boxed on the shelf for about 6 years. It is VERY hard and clear. The painter did a very nice job on both the sealer and the paint. I like that product much better than the Redkote that was in my previous tank. I am not a fan of the Redkote product.

willis said:
My tank has a Caswell lining. It was sealed and painted and sat boxed on the shelf for about 6 years. It is VERY hard and clear. The painter did a very nice job on both the sealer and the paint. I like that product much better than the Redkote that was in my previous tank. I am not a fan of the Redkote product.
Click to expand...

I believe Redkote is solvent based. Caswell is epoxy. It's hard as woodpecker lips.

I’m going to add this here, just because this guy does such beautiful work. Pricey but beautiful.

Mailman said:
I’m going to add this here, just because this guy does such beautiful work. Pricey but beautiful.

Apparently, you get what you pay for. That and you've proven that they back their work. Good on them! So often, we buy cheap and that's exactly what we get.