Thanks for the input folks. The gas tank issue is well on its way to being solved thanks to finally breaking down and just buying a new one. i went with this:

it's similar to the one posted by GGGgary, made by the same chinese company i imagine, but i thought the shape was cute. in the same vein, the little rubber mounts will have to be futzd with in order to get it sitting the right way. maybe that will be my first or second babysteps welding project.

While i'm waiting, I decided to go ahead and remove the airbox. I just thought i'd take this opportunity to express my disappointment in the Haynes manual. This has been my one and only experience with them so far but i've just tried to crack the manual for the first time in order to determine how to remove and disassemble the airbox and there's not a single diagram or description in this whole book on how to accomplish that. really feeling like money well spent lol.

anyway, does anybody know where i can find a detailed visual representation of exactly how to take apart the airbox or am i just going to start unbolting things and hope the bike doesn't fall apart?

I often refer to the exploded parts diagrams on Partzilla when assembling or disassembling things. Here's the one for a '77 airbox .....

Many of us find the real factory manual is best. Clymer and Haynes are nice to have for cross referencing stuff but my 1st go-to is always the factory one.
M

having looked at the diagram for a while those things kind of make my head spin. either way, i think i traced the right bolts to the right places. turns out the airbox comes off in two pieces. voila. 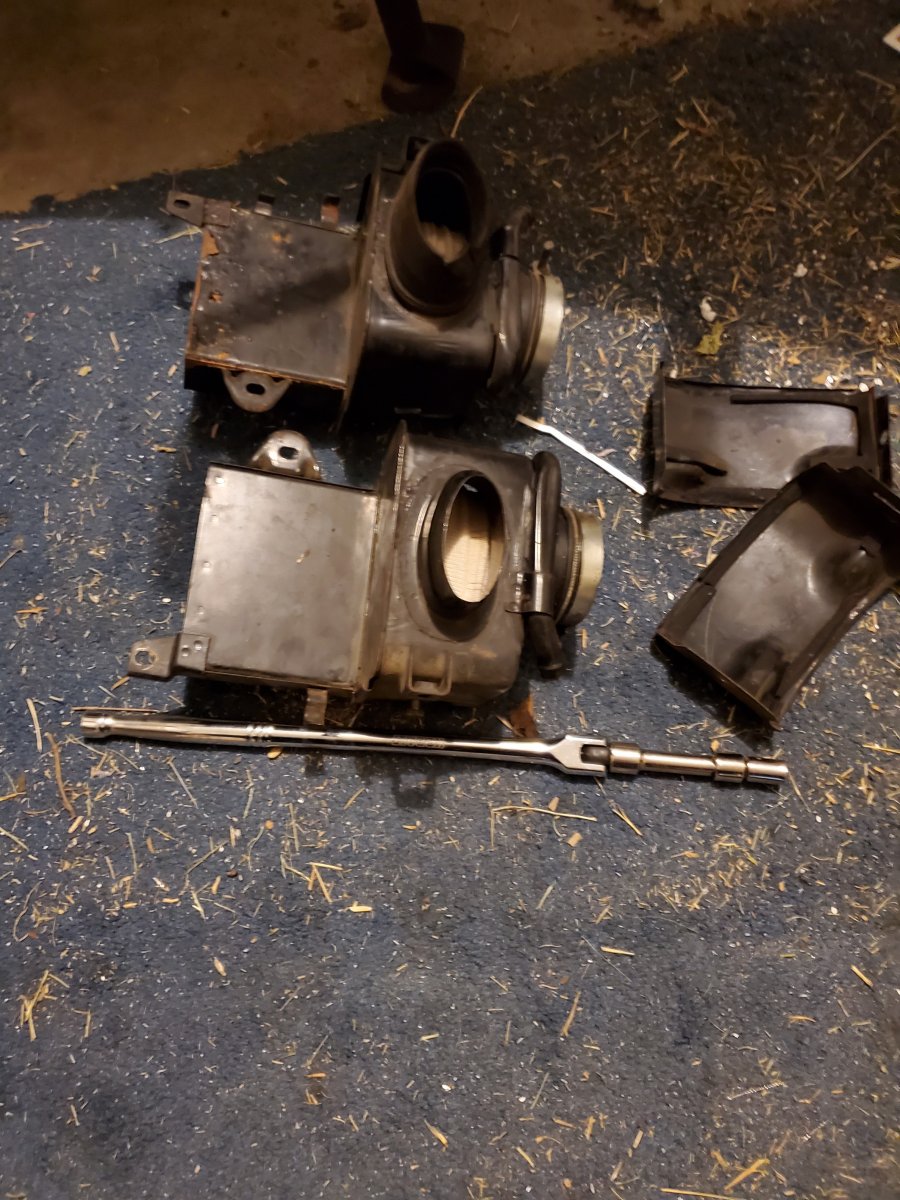 however, i noticed a rubber hose connected from the airbox up to the top of the motor. what, specifically do you call that, and what happens to that when you convert to pods or some other filter? 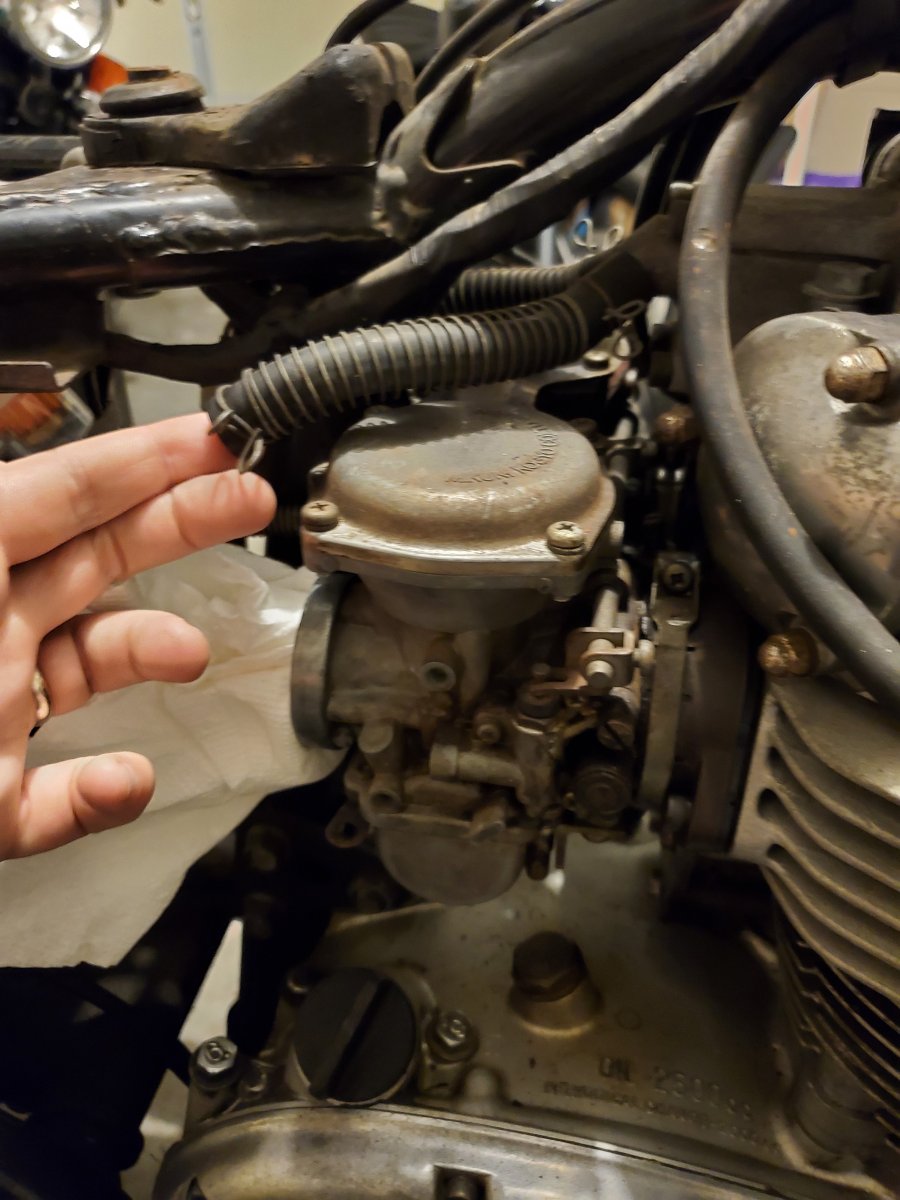 Crankcase breather. First to do this AFAIK, but it seems to be working well, put a couple thousand miles on it so far. Copper tubes on the end of the stock breather plumbing pointing UP, ending inside the Uni filters. Basically the factory vent method on a UNI filter
Last edited: Oct 19, 2019
M

i see, so it's definitely needed. whatever filter i get has to be modified to accept those breathers or else i'm gonna have a bad time.

Capping the breather tube with a one way valve and filter is popular. Do a search on crankcase breather you will find many ways to skin this cat.
Last edited: Oct 19, 2019

Some of the early bikes ran the hose into the right cover and poised it over the chain. Any oil mist or drips oiled the chain for you, lol. Many stick little K&N type filters on the ends of the hoses. I started out that way but it was kinda messy. The K&N was always soaked with oil and while it never dripped, I figured it was just a matter of time before it did. Finally I switched to power brake check valves. This is the best set-up I've tried so far. Poised over the pod, any oil mist or drips that come out just go into the filter. It doesn't hurt anything because the filter is oiled to begin with. That being said, I've never noticed any oil coming out of the check valves, the ends just look damp at most. 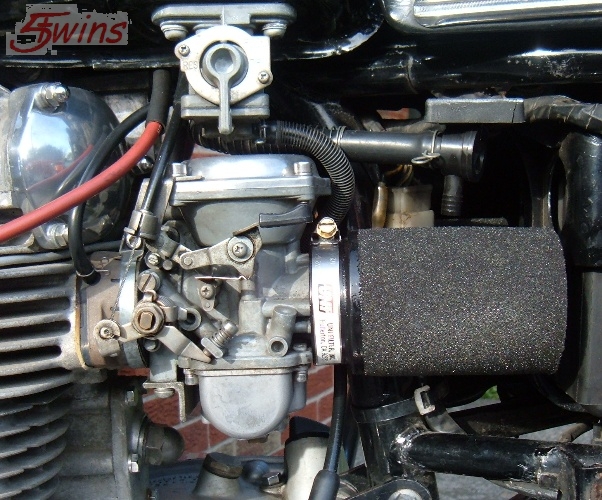 The valves are available at most auto parts stores for about $5 each ..... 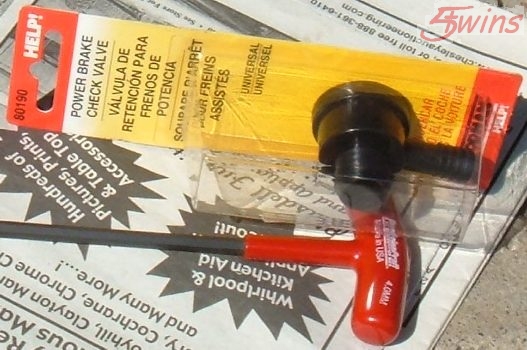 Thanks. I just did a bit of googling. seems most other people aren't as careful as you. I didn't see any mention of one way valves, most people are just routing the tube somewhere low on the bike and jamming a little filter doodad on the end. one Aussie guy with a Honda Shadow just had an open tube. either way, looks like most of the one-way valves and filters i'm looking up are 10 or 12mm. i guess i'll just order one.

check that, nvm. i didn't realize that oil actually came out of these things. the second idea with the check valve looks clean and effective. thanks for that.

Do you folks actually recommend a specific pod? In two screenshots now from two different people it seems like you're using the same ones. I wouldn't know the difference between one and another truth be told.

If you go with the power brake booster valve, you'll find that the current plastic hose from your breather is a perfect fit. The small end of the booster valve should sit on or above the foam filter. Two breather tubes? Two booster valves, one for each filter. Some models only had one breather tube.
M

edit: some initial measuring indicates the ignition coils will reach back under the seat if i unbolt them. any reason why that wouldn't be a good idea?
Last edited: Oct 22, 2019

When you start relocating the rubber mounting pucks be wary of the full turn of your front forks. There's a fork stop on the neck but if you mount the tank too far forward you'll dent your new tank.
Sort that out and then see how much room you have to finagle your coil(s).

you'll see when i'm able to post a pic, but the tank will definitely not be too far forward. that part i've already figured.

MISTERPROFESSIONALITY said:
most people are just routing the tube somewhere low on the bike and jamming a little filter doodad on the end.
Click to expand...

Even that is not absolutely necessary. On the early bikes such as my XS2 the breather hoses ( which are pretty long ) are simply routed behind the down tube and exit out below the center stand right into the atmosphere. It’s actually the way a lot of early motors vented their crankcase pressure. 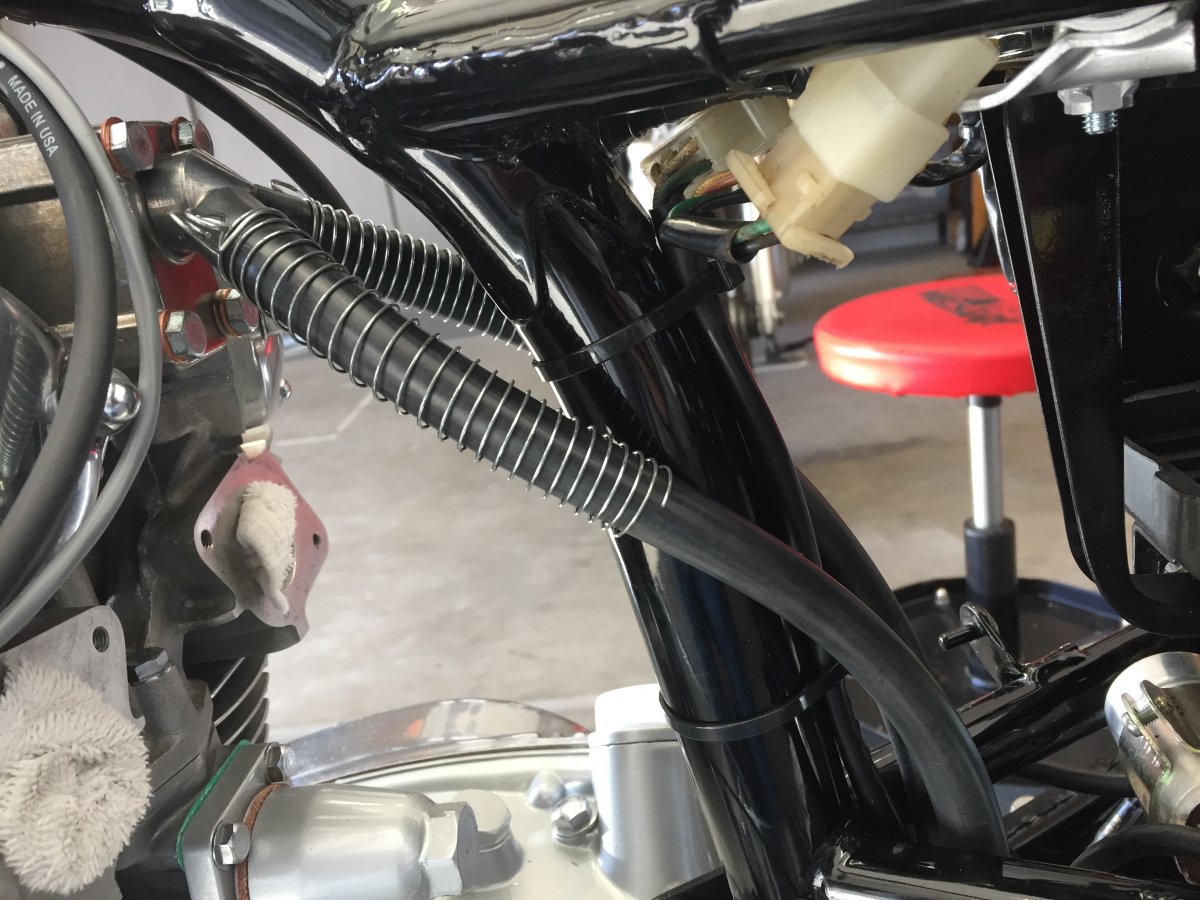 It was the way most engines vented the crankcase on cars and everything else until the PCV valve was invented. Before the PCV valve came along a few manufactures tried running the vent into a mesh screen to capture the oil and return it to the crankcase. The PCV valve was the best thing to happen to engines. It not only kept the oil from dripping on the road it cleaned the engines up on the inside. A small engine with dual carbs doesn't really lend it's self to a PCV. In order for a PCV system to work you have to have enough displacement and constant vacuum to put the crankcase itno a a vacuum.

What 5Twins suggests with a brake booster valve is probable the best you can do on a 650 for oil control. Only problem with it is allows the crankcase to develop positive pressure which can cause oil leaks. All the seals in a 650 are designed for negative pressure or at least neutral pressure in the crankcase.

MISTERPROFESSIONALITY said:
but the ignition coil thing has me worried. I didn't anticipate this. Pictures coming soon, but in the mean time, has anybody else ever had to relocate their ignition coils?
Click to expand...

Joker machine has a mount for an aftermarket coil. Do you have room for a single coil? Use one set of points and waste spark. Or install electronic ignition.

If you're running foam filters, there's room to mount a coil on the front of the battery box. You can read how I did it here.

Jim said:
If you're running foam filters, there's room to mount a coil on the front of the battery box.
Click to expand...

Thanks, but the intention is to nix the battery box as well. If anything I guess i'll have to mount them inside the seat pan that will eventually be there. You did answer a question for me though. it doesn't matter whether they're oriented horizontally or vertically, i guess.


jetmechmarty said:
Do you have room for a single coil? Use one set of points and waste spark. Or install electronic ignition.
Click to expand...

I appreciate that suggestion but all three of those sentences were over my head. The issue isn't the number of coils, so much as the fact that they're right in a spot that prevents the new gas tank from resting all the way down on the frame where it would normally go. So, the idea is to move them out of the way so the tank can sit lower, where i imagine it's supposed to. 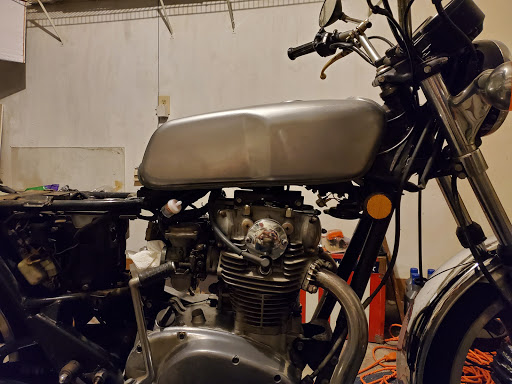 what i've done here is rest the new tank on the bike in a fashion that illustrates how high up it would have to sit to clear the ignition coils underneath. it's pretty darn high. higher than i'd like. This looks like it will also make seat shopping pretty difficult, due to the back being too high up for the front of the seat to cover it. 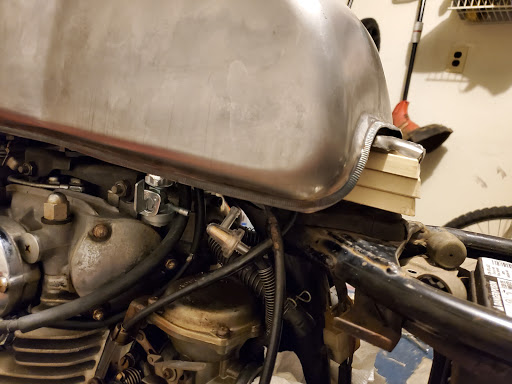 I stacked some rubber under the back of the gas tank over the spot where it typically mounts to the frame to illustrate just how much it has to be lifted for this fitting. this picture also illustrates another issue: the petcock. in the picture it clears the engine...*just barely* any lower than this and the petcock is resting on the engine. Even my dumb ass knows that won't fly. So this introduces another element of stupid to this situation: even if i move the ignition coils to let the tank sit lower, the petcock won't allow it.

So, follow up question: does a petcock have to be oriented vertically to do its job? can i just reroute it into a horizontal position so that it's out of the way?

D
Bringing my 650 Special back to life.