So I know I could probably make one, but I'm thinking about buying a motorcycle wheel truing stand and static balancer. If I made one, it would probably work ok but look like shit and take a while to build. Plus I'd still have to buy the cones and bearings and metal.

So I'm thinking about getting one like this instead 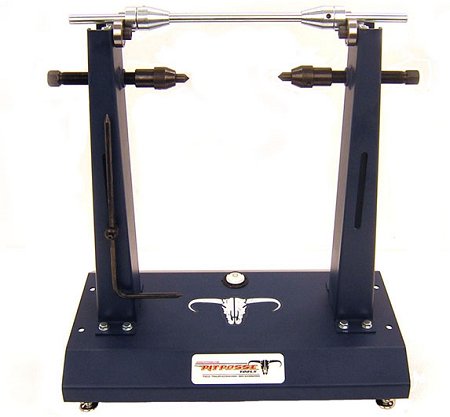 They run about $150 new. If I used a dial indicator and use a highly adjustable arm, I could still use it for to check forks and cranks. Would probably have to make a new base with more adjustments, or just drill new holes if I need if for that.

One problem I'm going to have is all these stands are built for truing 21" wheels at the largest. I need to lace up, true, and balance those 23's I was talking about in another thread. So I think I'm go to have to make some extensions for the arms to raise them up a little bit..

I'm also probably going to buy a spoke torque wrench like this: 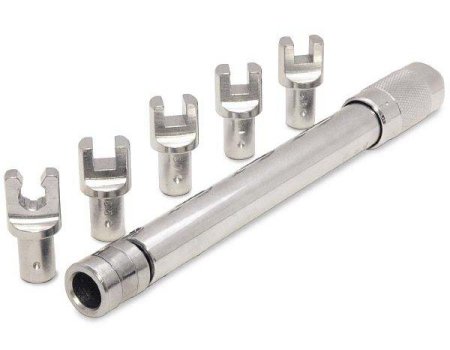 They are about $125. Some of you guys will probably say you don't need the torque wrench but I haven't been building wheels for years and don't have the ear for the "ping" of a properly torqued spoke. Plus I like new tools.

I was going to send the rims and hubs out and have someone else do it all, but it's going to be about $100 per wheel for the spokes, then another $100 per wheel for lacing and truing. You also have to figure in probably 80-100 for shipping both ways. So buying the stand and torque wrench will cost about as much as I'll save, but then I'll have the tools forever and a wheel balancer to boot.

Iâ€™ll also learn quite a bit and get the satisfaction of doing it myself. Years ago I trued a lot of bicycle wheels so I understand the technique. Most of the rims were bent too making the process a lot more difficult. I think having new spokes and nipples and the proper tools, along with new un-bent rims, should make the process pretty straight forward. That is, if I can figure out how to lace them up. There are plenty of online tips for that though and I'm sure I can figure it out.
I

..cool torque bar-i want one-have been lacing and trueing my own wheels for 35 years no problem...its not quite as easy as you might think but when you take your time, think about what youre doing and understand that a wheel is a finely tuned system requireing not only correct building but balancing and tyres too...

Yeah I know it's not at easy as some people make it look. I laced up a bicycle wheel once and things like that are always at least 3 times harder than you think they're going to be.
C

yeah i agree it looks simple but its much harder to do sometimes,you just need to take your time.

So I called Buchanan’s and a set of 36 stainless spokes and nipples up front are going to cost $108 and the set for the rear is $106. A couple more dollars than I thought but the increase is probably due to the spoke length.
I

- im really surprised you can get 23 inch VA spokes...are they made to order?

Yeah they are custom sets made to order. You have to give them some specs on the rims and hubs and they do the math. I don't know any other place to get them other than Buchanan's spokes.
C

if it's just for wheels, you can use a xs650 swing arm

A dedicated truing stand and balancer would be better for my needs since I'd like to be able to use the balancer for more than just XS650 wheels. They are also more accurate than just using the wheel bearings. Plus the 23's I'm going to be building probably won't fit into a swingarm and it's nice that you can easily fit almost any hub to the stand for truing.
I

insx,do you have any pics of your down hill bikes

that would be great ,cant wait to see them.

If you have access to a welder, you can build your own wheel stand [basic dimensions are on my web site (linked to in a prior thread)]. Don't bother with that fancy spoke wrench, get a Rowe, about $8 now. I've yet to find a spoke it won't fit. Spoke torque wrenches are pretty much useless except to get you "in the ball park" as far as tension goes. Here's an old thread from another list that explains the wheel work pretty good. This is for all members EXCEPT INXS - DON'T YOU EVEN LOOK AT IT !!!!!

You've used enough of my info and pictures in your posts without giving me any credit and I've had enough of it. Not to mention your antics on another list where you baited the members with tales of your 8 plate clutch and hydraulic cam chain adjuster - then refused to give any info on it. Big secret apparently, that's fine - you keep yours and let me keep mine (except I don't, I'm willing to share).
Last edited: Dec 13, 2009

Yeah I do have a welder, but like I said in the first post, it would probably work ok, but look like shit and I'll still have to buy some of the parts for it plus the metal. Not to mention I'll never get around to actually building it. I think I'd rather start with a cheap stand to and modify it for what I need. That way, it's mostly done and comes with the bearings, cones, etc.

On the other hand… I could save some money and make it how I want it from the start. Plus I could build it a lot stronger…. what to do.. what to do...

That's some good info on building wheels. Regarding the spoke torque wrench, I don't know what "in the ball park is" so it would be good for getting the spokes to the “proper tension” then making adjustments to true the wheel from there.

quote...i have used photos in this series that i found on the net as well as my own - if anyone recognises theirs let me know and i will post credit for it - all accept my thanx for the use of...unquote

...if you have a problem with people using your photos-dont post them in a public place or write your name on them, i see many of mine out there too, am i spitting the dummy?-the above is a line you will find in some of my threads which include outsourced images...to date no-one has ever responded

...as for baiting people with info...???...i attempted to bring an hydraulic cam chain adjuster into discussion on another site this is true, i got a somewhat strange reaction that turned to shit...interestingly when you go back, there have been several posts removed by their originators which changes the whole thread flow for those that werent taking part

...the reason i dont post on the garage is simply that imho you people there take yourselves too seriously-the grammer cop episode here is a good example ... i stopped posting on 650motorcycles.com in oct after realising paul was ripping people off ... i did enjoy 650rider while jtt was having a fit-some reactions were very amusing ... here travis has put together an interesting site that i for one am comfortable with, some very ontoit contributors doing their thing, so far without much shit although im sure the trolls will eventually find their way here...if the members here want to hear about the 8 plate clutch or hydraulic cam chain tensioner i have no problem with it, never have, i think that both modifications have their uses and am happy to widen perspectives - i have neither a problem with nor a financial interest in either...i find it strange youre attempting to force the issue here though-you must really want to know...naya the info is out there if you look-theres even a patent application floating around...

Here's a good link on how to lace and true a motorcycle wheel.

I used a spare swingarm clamped in a vice to true up the wheel. I re-laced the rim by removing 2 spokes at a time, inserting the new spoke and working my way around the rim. I tapped on the spokes with a screwdriver while tightening the spokes. This sounds pretty crude but it worked great for me, no wobble, no out of round and no worry about trying to figure out how to lace a rim. I did find out that there are two types of spokes, with heads angled differently for inner vice outer spokes. Now I have 73 wheels on a my 79 XS.

O
For Those That Have Drilled Their Mag Wheels