Working on an 81' XS 650 that I completely rebuilt a few years back, sold, then bought back and had to rebuild as it was left outside.

I tore the bike back down, honed cylinders, lapped valves, new gaskets etc and yesterday had the bike running decent. Fired it up maybe 7 or 8 times. It has minimal wiring (tc bros harness, updated fuse box, ). It was not charging so I cleaned the reg/rec connections and was getting 14 + volts after that.

So I had it running and noticed it was leaking oil from the top cover, I pulled tank off and re torqued the head bolts. Like an idiot I started cranking the bike with the plug wires off as I had drapped them over the handlebars to get them out of the way. I have heard this can fry the TCI box?
I am getting decent spark still with the plug grounded to cylinder (same amount of spark as before it was started since I checked initially before I first ran it) fins and have a fully charged battery. It wont fire now with gas squirted in the carb. I have checking timing and re adjusted valves.

I am at a loss here and can't pinpoint this issue? Maybe I am not getting spark when the plug is in the cylinder? If I fried the tci, would it still spark with the plug grounded to cylinder fins? Thanks in advance.

Northside said:
I have checking timing
Click to expand...

Maybe I'm missing something here, but how can you check timing on a non-running TCI ignition?

My guess is that you did fry the TCI. It's making a good spark, but the timing is completely random. I have run across this. Easiest way to check is with a known good TCI box.

I verified the dash and dimple on cam sprocket line up with the T on the stator.

Thats what I wasn't sure of about the spark relating to the tci, so maybe it is intermittent and not sparking at the correct time.

Northside said:
I verified the dash and dimple on cam sprocket line up with the T on the stator.
Click to expand...

Yeah, that verifies that your camshaft is correctly installed relative to your crank, but it does not check your timing. As said, I think it's probable that your timing is randomly all over the place, caused by a bad TCI. I've seen this once before.
J

It was not charging so I cleaned the reg/rec connections and was getting 14 + volts after that.

Charging battery ..Measuring power at IN Coils and IN TCI and service ground connections

In this situation I would look to use or borrow a timing light/gun to verify. A weak power supply and/or variation in actual spark or timing would become obvious quite quickly.

Electric start?
You can check timing with a timing light; with the plugs out and grounded. the e-start will spin it fast enough to verify timing.
Just a hint; Dry the spark plugs with a propane torch.

Bare copper house wire, as long as it touches engine or frame you are good.
Keep a setup like this around for testing.

On the home built tester front, everyone should have one of these. Although maybe prettier.
Plugs caps go on the screws with the ends ground off , the side with screw heads on should be grounded to frame or battery..
Screwing the grounded side in and out will let you find the spark strength as well as verifying sparks.
If your battery is healthy use it to turn the engine over for an initial spark check with both sides connected to the tester, if you do not get a healthy spark do the following.
Take the feed to the coils and separate it, then use a fused wire to tap the coil feed with the live wire, reconnect the coil feed once you are satisfied that you have a good spark on each side.
For my SG the sparks should jump a 6 mm gap at 500 revs. so once you have found a spark that will jump about 3mm then reconnect one side to the engine and let the engine run above 500 screwing the remaining side connected to the tester out until it stops sparking, kill the engine at once and measure the gap.
Repeat for the other side.
Anything above 5mm should spark well under compression.
You might want to use an electrical screwdriver for adjustments, especially if you are allergic to high voltages.
Seriously though providing an alternative ground can affect the tests.

Ok so I have checked the timing and the rotor line is right in between the "horseshoe mark" . Should it favor one way or the other?
I really expected it to be sporadic but it's not.

I also popped open the TCI and it was very corroded but nothing obvious like burned marks or smells.
I have also confirmed 12v at the coil.
I have another TCI coming in. 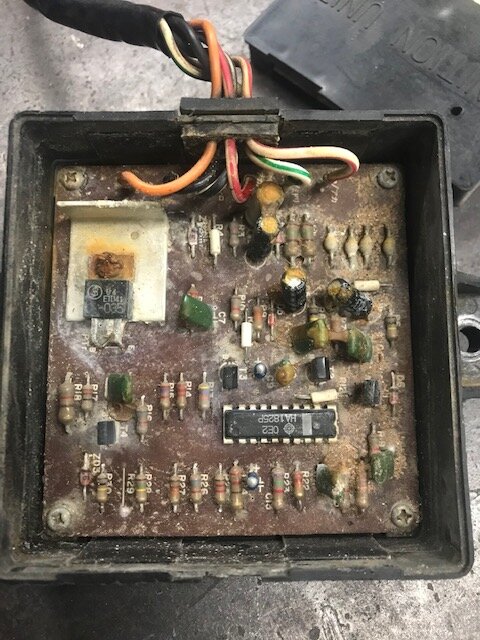 Difficult to se but lower right corner 3 -- d component from Right appears to have some white stuff on it
Exterior or Blown ?? 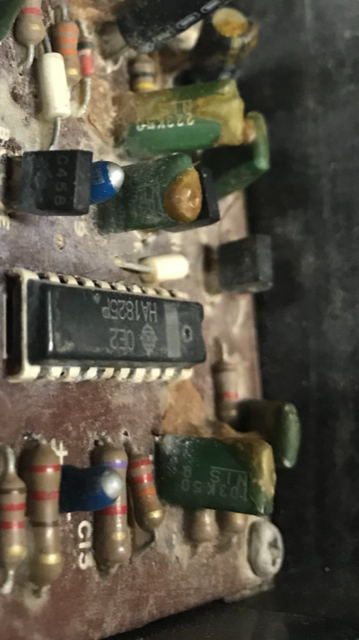 Guessing the green parts are burned? 2 are like that but the others are not.

If you're getting spark, and if the timing is correct as checked with a timing light, then your TCI is good, and your problem lies elsewhere, although I can't imagine where in this case.

Are you trying to electric start it or kick start it? If the battery is a bit low, many times the bike will crank but not start. The electric start is using all the available battery power which leaves none to power the ignition. Try kick starting it.

Replaced TCI with one off a running bike and it fired up instantly.
J

There are people that repair these so dont throw it away.
It does look like a lost cause .as if water has entered. but one needs to see the circuit board and components .
That is the magic with electronics sometimes it is a 3 min job a $ 1
Other times impossible.

The rust at the Transistor at 11 o Clock is a place of interest , Rust -- No connection to the cooling surface -- overheating Kapoff... Kaputt

Start up: success, then failure!
2