I recall a General back in the First Gulf War, a reporter asked 'im if they had a plan. I'll overlook that he shoulda been slapped silly for that one... but the General replied "Of course we have a plan. You have to have something to deviate from."

After a good cleaning in the stoddard tank, I noticed all the sealant slopped on the case halves. Yeah... Yamaha din't slop like that at the factory. Someone's split these cases before. Bein' a vertical split case, there's tons of warnings in the book on reassembly. If you've never done a vertical split, 5 speed engine, well..... it's pretty easy to fuck one up. Crap. 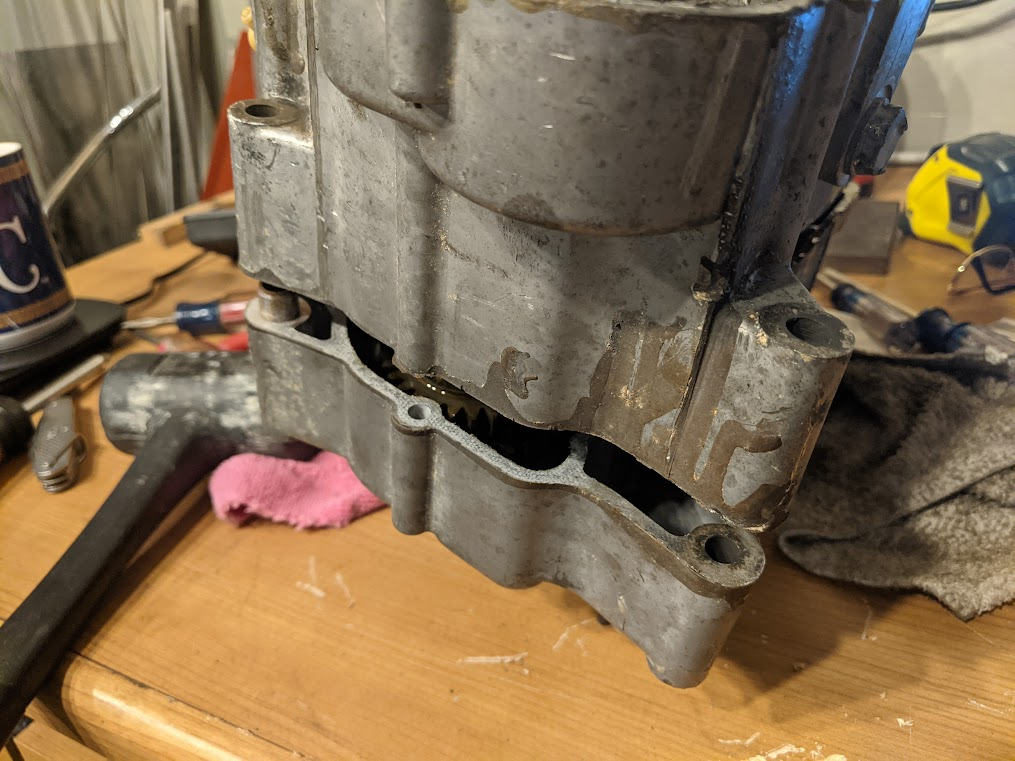 And... the crank was pretty notchy trying to spin it. Yeah.... guess "notchy's" bein' kind... it was damned hard to turn by hand. Crap.

Anyways, the top end turned into a full teardown. Wasted a lot of time hunting up bits to make Yamahas special tool for splitting... when I had two full case's of pullers. Crap.
Still had to order a couple 8mm bolts long enough though. 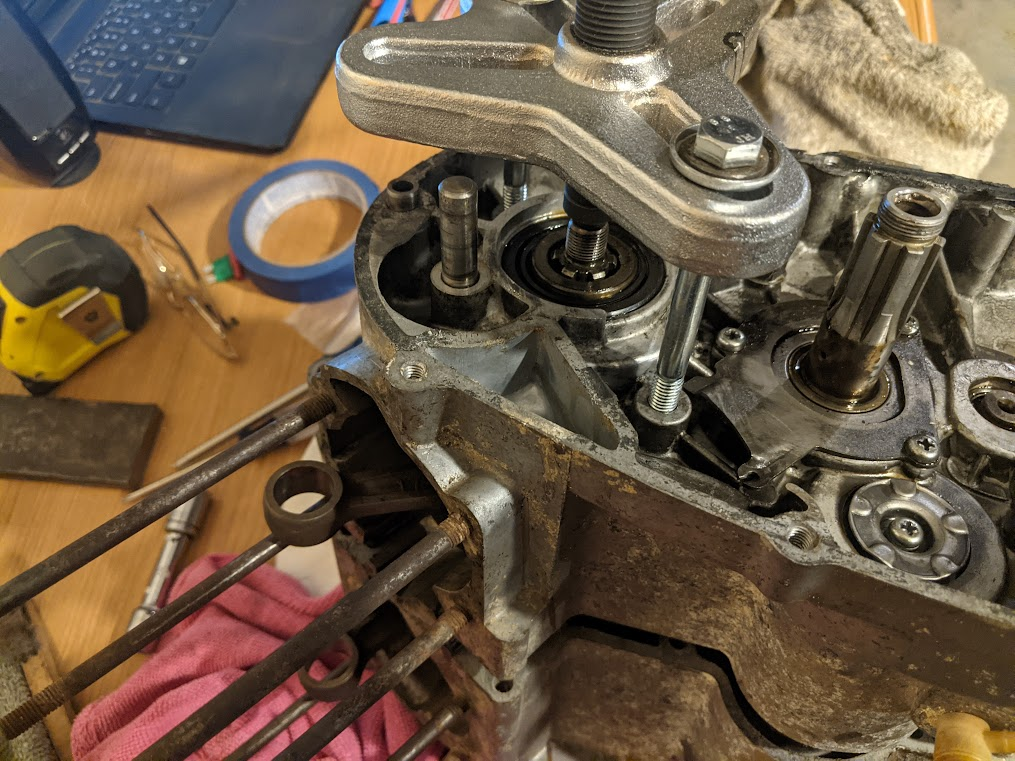 Got 'em separated easily enough. Amazing what you can do with the right tooling.
Looked the tranny over real good. Most of the book warnings concerned the tranny and shift forks. Paid special attention there. All good.
Put the crank in some V blocks.... it's bent... big time. Max runout allowed at any point is 0.0012". I'm gettin' 0.006" on one of the inner cheeks.
Crap.

Note: Cleaned up the cheeks with a blue rolok disk before measuring. 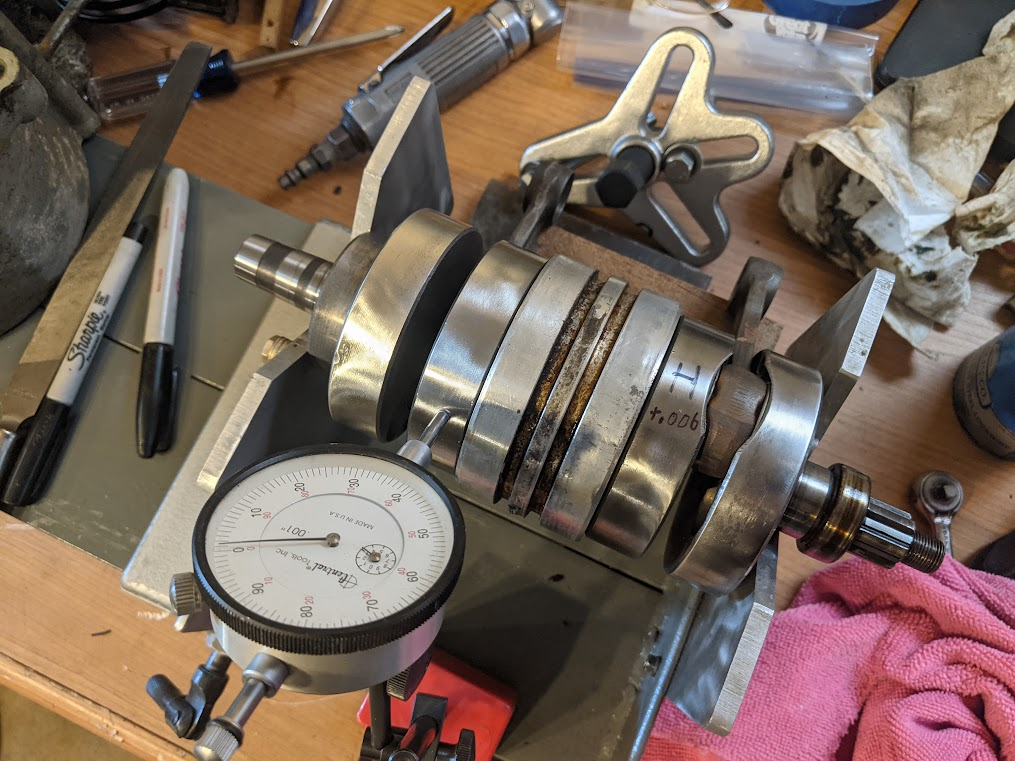 It's bent so bad that it left marks inside one of the case halves. 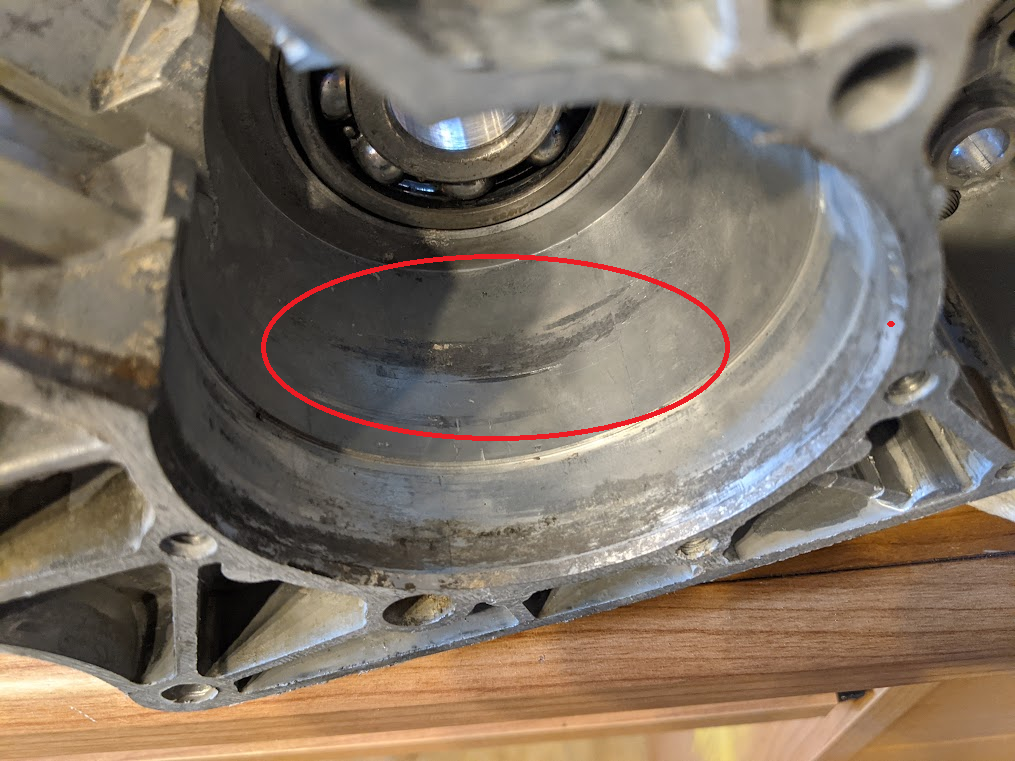 ...and the right crank bearing is toast. Cleaned it again and blew it dry. It binds up so bad I can't turn it by hand.
They're still available. Fifty bucks shipped from Partzilla. Found a NOS on Ebay for $11 to my door.... sold.

So... back to that bent crank. Six thou runout sounds terrible, and it is for an installed crank. If you've ever put together a split crank though, you'll know that ain't shit. When you initially press one together you might start with double that for runout. It's just a matter of beating it straight. Seriously, that's how you do it... find out where it's bent and take a BFH to it.
'Cept you can't use just any hammer. A steel hammer on a steel crank...

Even a brass hammer is a no go. The head of it will work harden and be almost as bad as steel. It has to be a lead hammer. One, because of the weight, and two... because lead remains malleable no matter how many times you smack it.
I used to have one, along with a nice set of wedges for spreading cheeks (insert dirty joke here.
That was many moons ago. Scrounged around the basement. Found a 5lb bar of lead. I even remember why I have it. Was part of a BD5 kit. It was used to balance the stabilator.
Anyway... it's a hammer now. 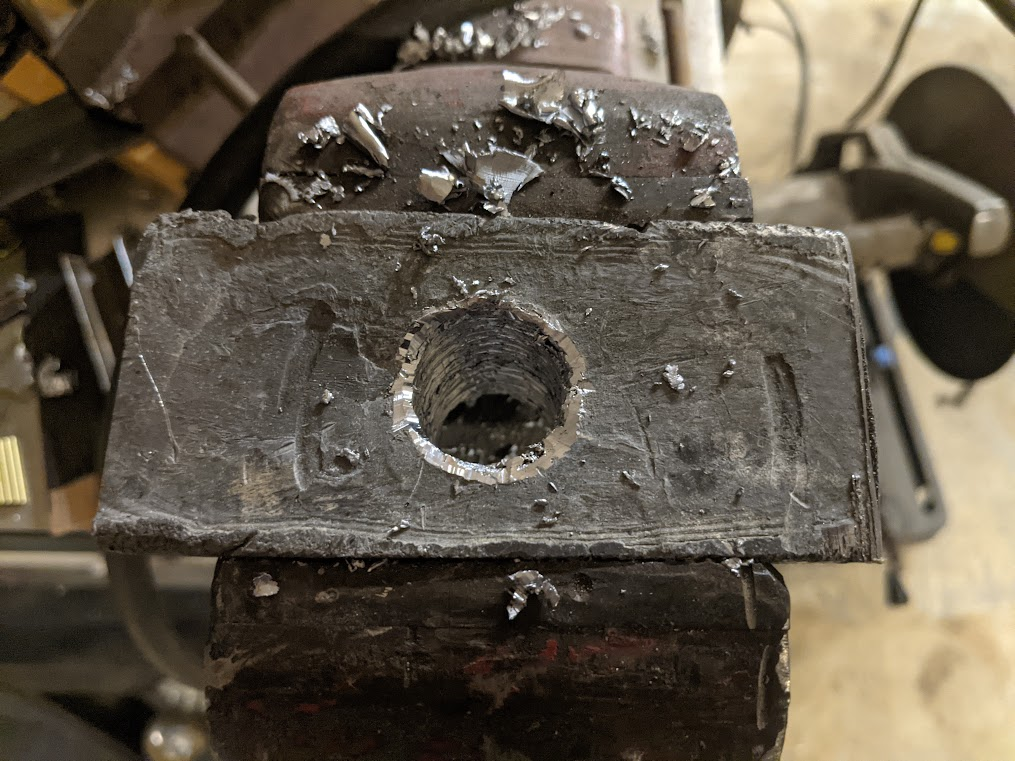 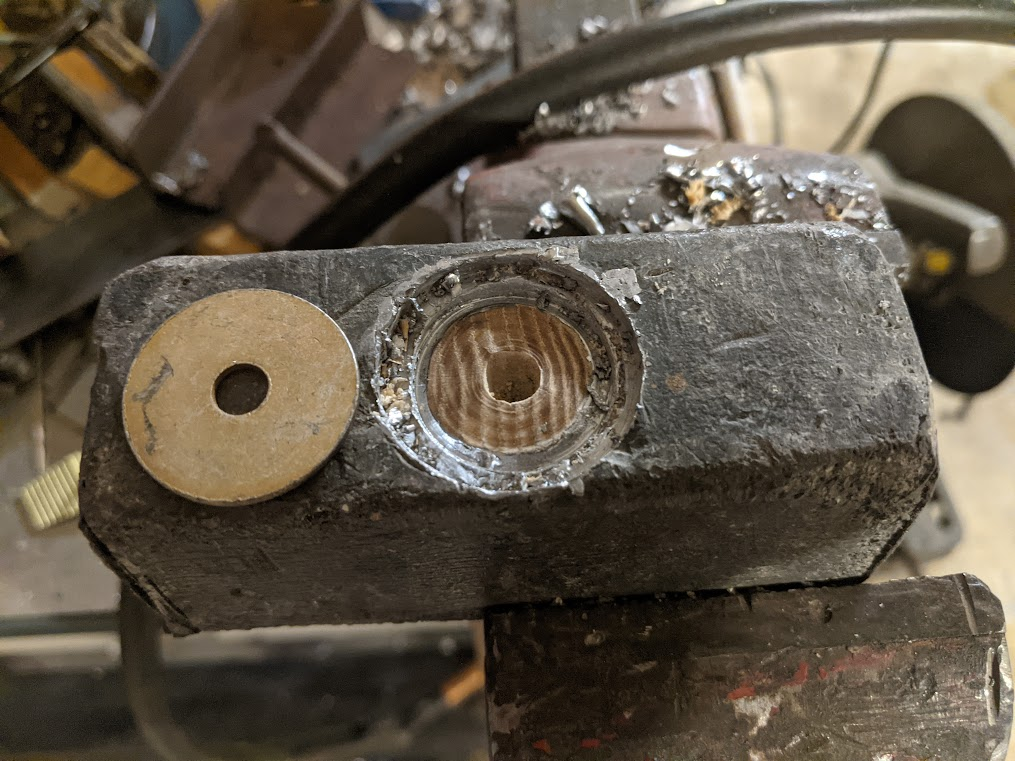 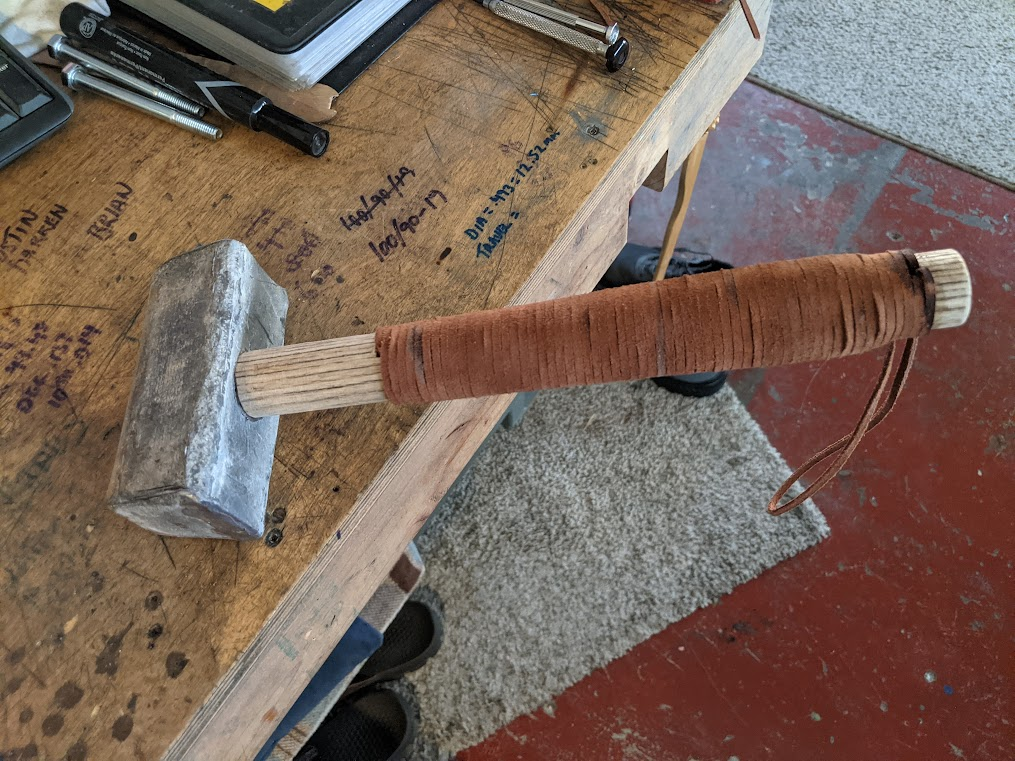 ...and I din't turn into a mad hatter makin' it...
Anyway, I've got the worst of the runout down to 0.0005 or thereabouts. Well under the book number. Got about a week before the right main bearing shows up. Might see if I can get it down to zero.

Ah, the deadly dead blow hammer, slayer of crank gremlins! They'd best run while they still have little legs to run on.

Just found this thread - great read! It's amazing what can be restored with a little (a lot) persistence, know-how and work. And a bit of cash.

The RD200 was the over-looked bike in the range. Ridden one a few times, nice little bike.

Love that you made up special tools from what was available - that lead hammer!

Yeah, you gotta love that hammer! You actually made it look like a finished hammer, if I had done that, it would look like some cave man tool!

Mailman said:
Yeah, you gotta love that hammer! You actually made it look like a finished hammer, if I had done that, it would look like some cave man tool!

C’mon Bob! We all know it would have looked like a polished Mjoinir if you had made it lol

Wingedwheel said:
C’mon Bob! We all know it would have looked like a polished Mjoinir if you had made it lol
Click to expand...

Yeah, the Samurai of Lead hammers!

You don wanna be around if Jim throws that at yer head . . .

Bummer about the crank, but it seems like you’ll get it sorted.

Any idea what you have for a planned look of the bike?

WideAWAKE said:
Any idea what you have for a planned look of the bike?
Click to expand...

Yeah.... kinda sorta. I'm just gonna wing it mostly 'cause I'm gonna use mostly stuff I already have on hand... a budget build.
If you can imagine a combination of these two bikes.... the polished metal bits of the one.. the standard shock layout of the other...
I'd love to send the frame out for chrome, but that's not in the cards unfortunately. A nice gloss aluminum paint maybe? 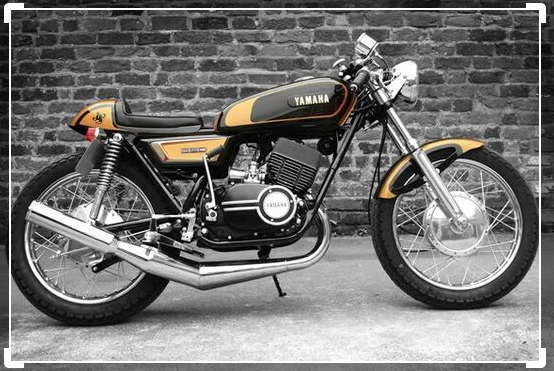 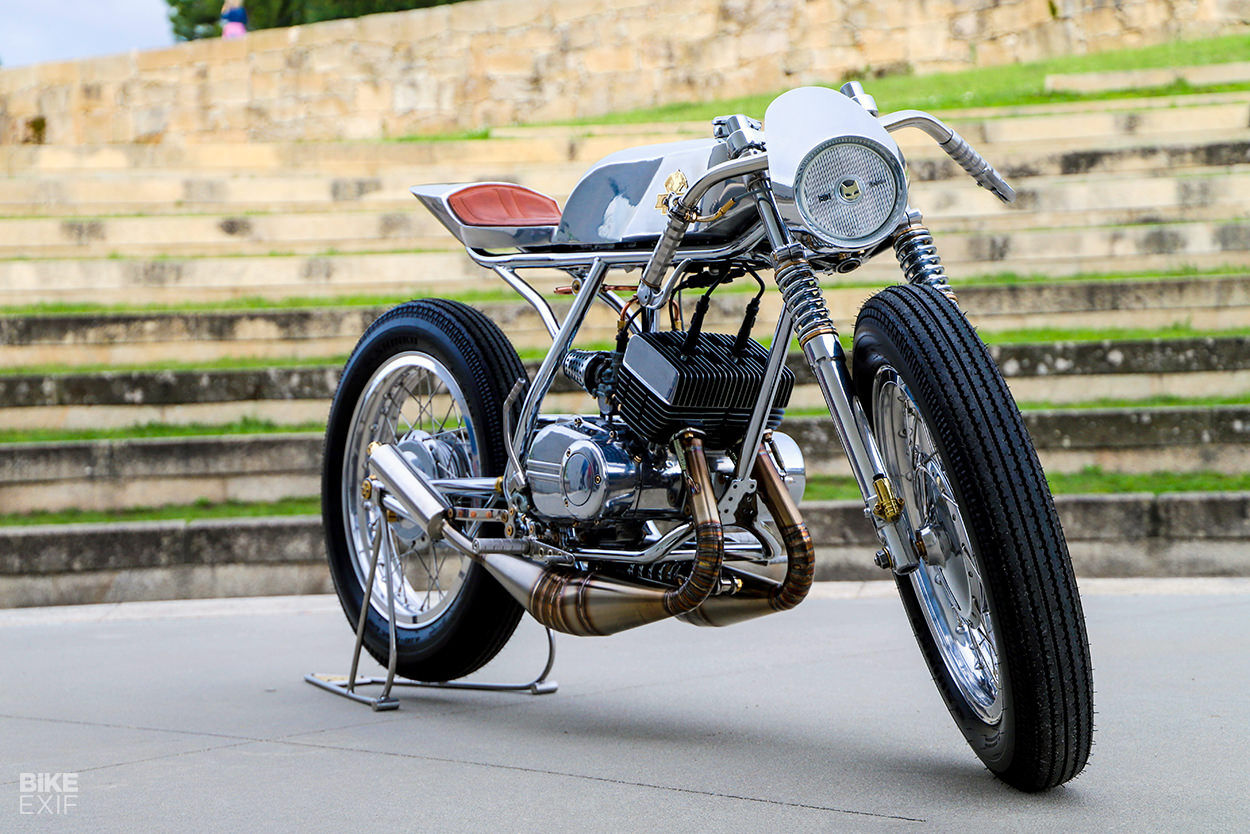 Jim said:
Yeah.... kinda sorta. I'm just gonna wing it mostly 'cause I'm gonna use mostly stuff I already have on hand... a budget build.
If you can imagine a combination of these two bikes.... the polished metal bits of the one.. the standard shock layout of the other...
I'd love to send the frame out for chrome, but that's not in the cards unfortunately. A nice gloss aluminum paint maybe?

Just stumbled upon this video, if you need some inspiration for some new tools to build this bike with…

Right crank seal had turned to plastic.... busted into tiny bits when I pulled it.
It's 50yrs old, so I guess I'll cut it some slack... 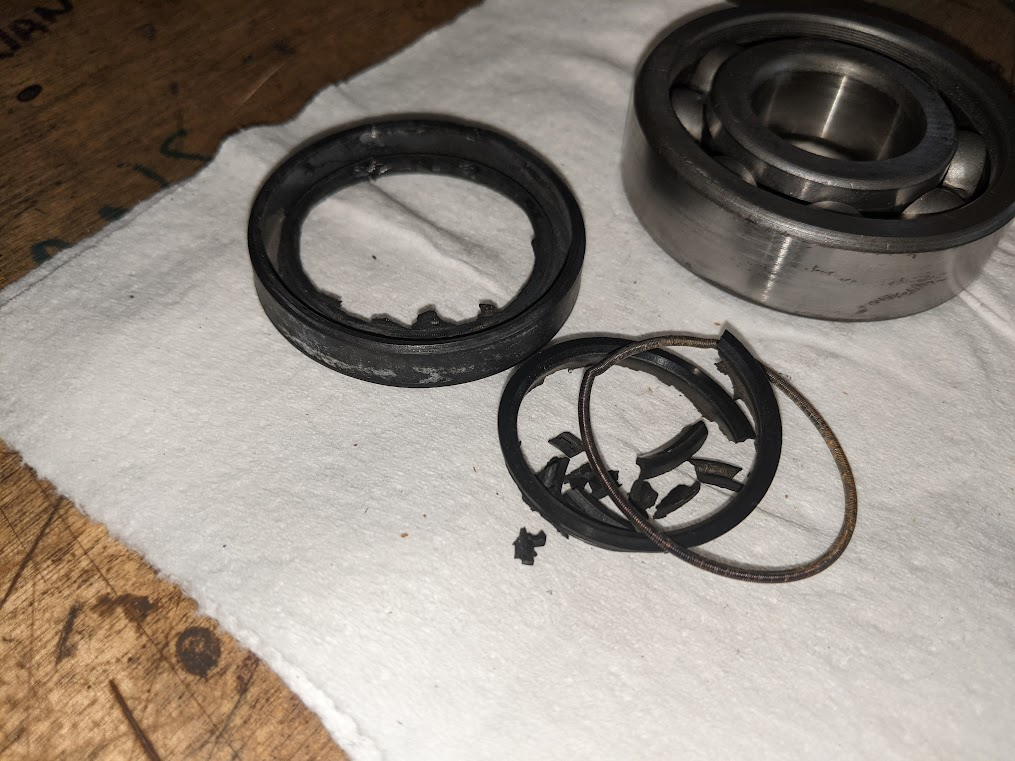 So... not sure if I just got Ebay bit or not.
Was advertised as an OEM Yamaha bearing (rt side crank).
It's not. It's made by FAG. The box says made in Canada, but the bearing itself is marked from Portugal. It measures out correct.. it's just that I don't recall the brand name? Yamaha dealt almost exclusively with Koyo bearings back in the day. Koyo and Timken are pretty much the gold standard for bearings.
FAG? Dunno. 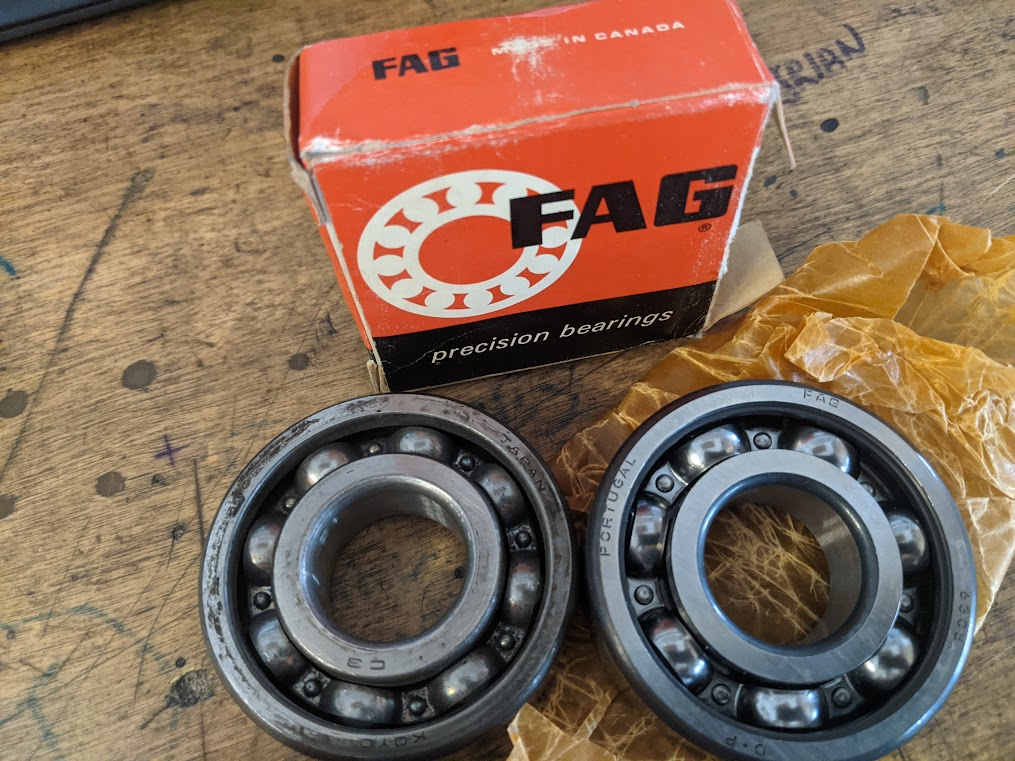 FAG brand was founded in 1883 and has about 130 years history. This brand is part of SCHEAFFLER Group, the world’s most famous manufacturer of bearings, FAG general bearings and high-precision bearings are widely used for industry, aerospace applications, sensor wheel bearings for passenger cars, large-size bearings with outside diameters of over four meters for wind turbines, etc. No matter whatever industry that need the bearings, FAG bearings products are the best choice for all customers. In other way, FAG bearings company has about 76,000 employees in the world, with 180 locations in over 50 countries, in addition, FAG has a worldwide network of manufacturing location, research and development facilities, sales companies, engineering offices and training centers for all customers, all of this make the FAG bearings is the another best choice for all customers.
Last edited: Sep 16, 2022

Every Italian motorbike or scooter I’ve had from the 60s/70s had FAG bearings. I’ve had a couple dozen.

I saw hundreds of motors go through the shop I worked at when I was younger with 40-50 year old bearings in em and still crankin.

I don’t see any hesitation to use it.

I want to think I have used that brand as well. Maybe in my Sprint back in 2009. I have a friend that's an engineer and he ordered all the bearings

Agree, a common brand I saw many times over the years while working on heavy equipment.

I used to design large (up to 12,000 HP) axial fans for power plants. Those fans had to be able to run 24-7 for years (usually 5-6) and we used FAG bearings almost exclusively.

Carl, my brief time with a lovely much understood dog