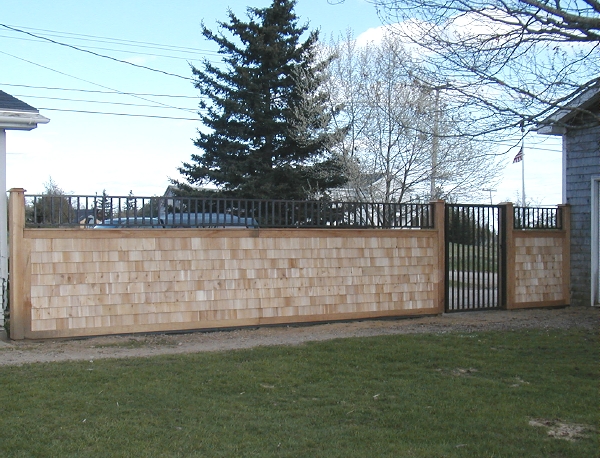 This is what I refer to as the "Martha Stewart Fence". I built it 20-odd years ago between the house and the garage.

That square tubing gate has been a pain in my ass for years. As the seasons change, the gate and the latch move in relation to each other and I'm constantly messing with the latch pin so the gate will latch.

The last attempt was a moveable pin captured behind a plate with a slot in it. I could tighten up the plate to adjust the friction and the pin would stay in the set position fairly well and that worked for a couple of years. Then wood aged and screws loosened and I was right back in the same predicament. 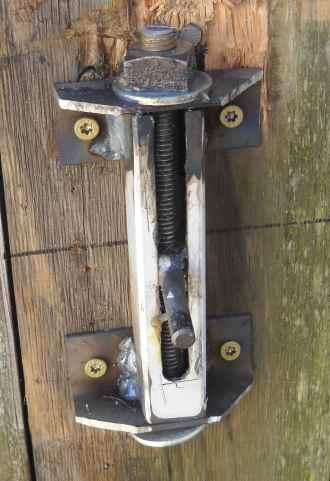 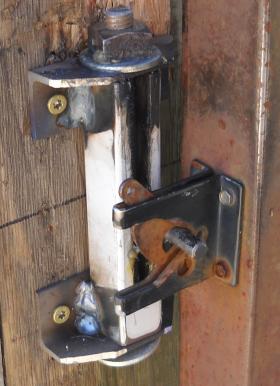 This solution will still need seasonal adjustment, but it's done with a screwdriver so it's easy and accurate (as opposed to tapping the pin up and down in the slot with a hammer...) and the pin will STAY wherever I set it.

Basically a captive nut in a piece of square tubing with a slot for the pin and the nut/pin runs up and down on a piece of all-thread. Plus the assembly is welded so it won't vibrate apart and it's screwed to the treated 4x4 that's under the cedar trim with four 4" Power Pro construction screws.

Other than slathering it with grease occasionally, this should be the last time I need to mess with it. But then, I've thought that before...

My CryBaby Pedal is my Favorite...

I had a problem with a wooden gate and a latch like yours. The posts would sag and knock the latch out of alignment. I cut a treated 2x4 and wedged it between the posts at ground level. This was a simple "fix" but it worked.

BTW, that is a beautiful fence. What did you nail the shingles to? 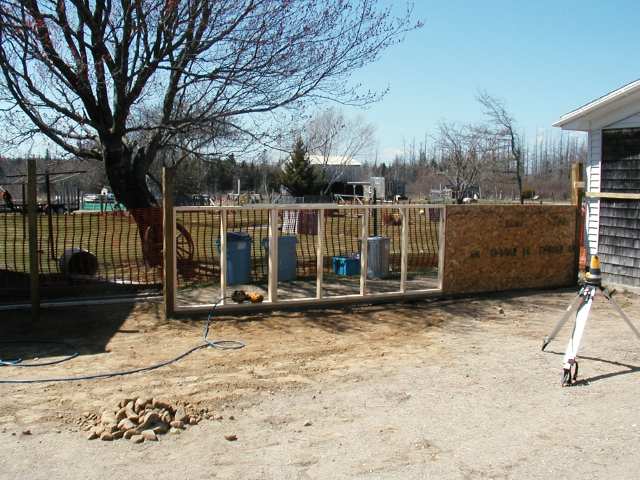 Bottom stringer is supported by a piece of 4" x 1/4 C-channel with a treated post in the middle of the bottom span to keep the C-channel from sagging. Fence has been VERY stable, except the short section next to the garage heaves the post next to the gate every Spring.

That is a very well engineered fence and gate latch! It always amazes me how hard , people who live in cold country have to work to secure any kind of support post that goes in the ground. We don’t have frost heave, here where I live. Fence builders dig a hole in the ground 15” deep and just pour cement around the post and it will be there until it dry rots.

Concrete around a post up here absolutely guarantees the frost will push it up out of the ground. I did a number of decks for other people back in the day and I had a hell of time convincing them of that.

The ones that believed me got 4x4 or 4x6 posts, minimum of 40" in the ground and wrapped in plastic sheeting to reduce the frost's ability to get a grip. As far as I know, all of them are right where I put them.

Same deal on chain link fence. Everyone wanted me to put concrete at least around the corner and gate posts. In the few areas where I could drive the posts instead of digging a hole, they are also right where I put them. Anything with concrete has either rusted off or pooched out of the ground a foot, usually both.

I also backfilled with sand or screened gravel to get the water away from the posts.

I don't suppose there were any "I told you so's" floating around during the demo and rebuild?