LA_Rider said:
as almost everything today is manufactured in China
Click to expand...

Nonsense. C D I ( I think they're in Texas ) is as good as you can buy. My S&K was also made in this country. Spend the bucks, it's a lifetime tool.

Ok...good point. I have various S&K tool sets which I bought many years ago.

Compression is checked with the engine not running. Usually, both spark plugs are pulled out, the test gauge is screwed into one then the other cylinder. Add a little oil in through the plug hole first. Then, kick the engine over a few times. Compare the readings from both cylinders. You can use the electric starter if it works and you have a good battery.

I see a lot of cleaning in your future. Use Muc-off or similar commercial product. Brush kerosene into really filthy oily areas.

Thanks for the tips on the clutch adjuster and compression matter. And I had a good chuckle re; the cleaning matter. Yep, there is certainly some elbow grease needed!

Re; Mom, had several different motorcycles through the years. Unfortunately the only photos I have of those, are generally blurry, as she is zipping by in various racing events and is difficult to see the motorcycle make and model. However, her favorite, that she always mentioned when the subject was broached, was her Indian Chief, as she said it exhibited a "low center of gravity" and was very easy for her to handle.

Thanks for the comments, mom definently would be appreciative of the kindness. She is flying with the Angels now.

My Mother was a biker too - single mother with a young family, she couldn't afford a car so she bought an ex-Post Office BSA Bantam, 125cc. I was 18 months old. The bike had a single saddle and a parcel shelf, to which she fitted a child seat and I used to be strapped in there. I was about six or seven when she traded for a Bantam with a dual seat - my legs were now long enough to reach the pegs. We travelled all aver Britain and Ireland, staying with relations or in Youth Hostels. Not your typical upbringing, but not your typical mother.

Yes, under that little chrome disc is the clutch adjuster and worm gear. normally, we keep it packed full of grease so your "leakage" may just be oil that's separated from that grease because it's been sitting so long ..... 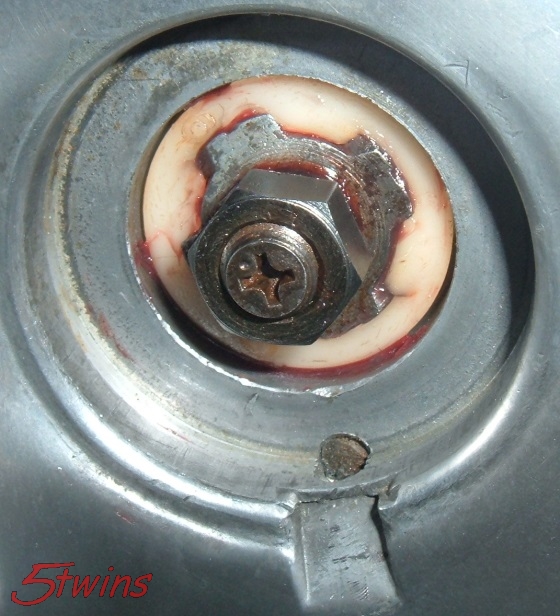 On the inside of the cover, you'll find an arm attached to the worm and the clutch cable connects to that ..... 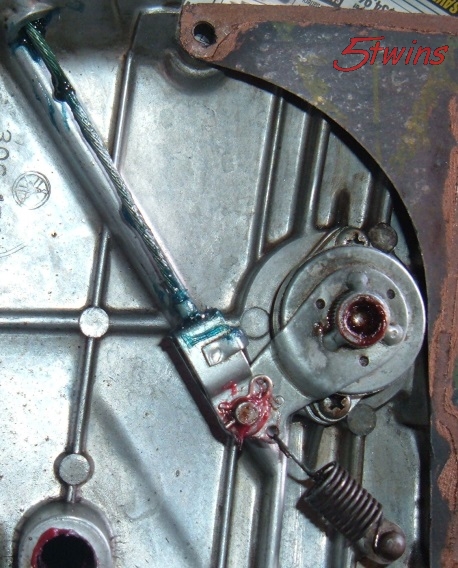 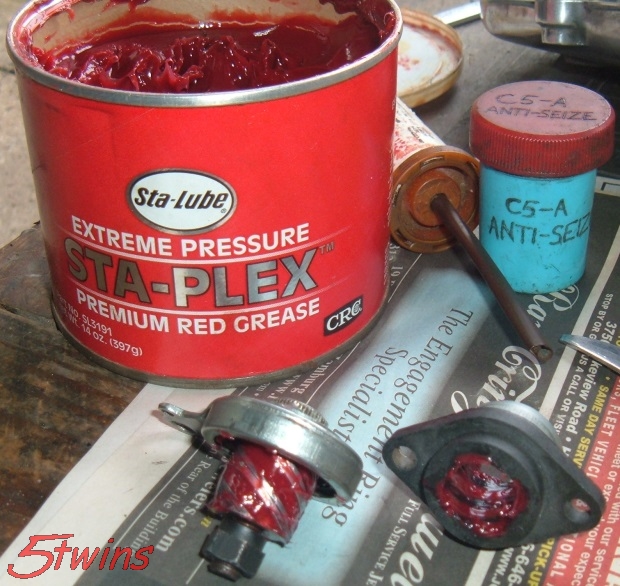 I do not see this in the Tech section clutch area.
Do you release all cable tension, drive the center screw into contact and reverse 1/8 turn, lock the lock nut. ?

Basically yes. But between that screw and the clutch you have a series of balls and rods. There's grease between some, oil between the others. To get the best adjustment, I like to stack all those parts tightly together. To accomplish that, I use a technique I call "fanning" the clutch lever. I pump the lever in and out, but only through it's freeplay range, until it gets to the point where it would begin disengaging the clutch. If you keep turning pressure on the adjuster screw as you "fan" the clutch lever, you'll often get as much as another 1/4 turn in on it as all the parts get stacked together tight. Then I back it off that 1/8 turn and lock it down.

Got a story and a question...

Well, I finally found and bought an airbox set. One of the carburetor ports has some damage, bent, twisted metal. The vendor, posted 8 photos of the airboxes on a white table surface. Both of the boxes had an orange tyewrap afixing the respective cover to each box and all of the rubber boots were present. I noticed that in a few of the camera angles that I couldn't see the engine-breather pipes, but in several of the photos the pipes are very clearly depicted. So, I bought'm. Fast ship, two days from Wisconsin to MexiCal!! That is fast.

However there is a problem, the airbox I received is the wrong version. The ad verbally states "1979 airbox set", but I received a 1974 or 1975 version airbox set, sans engine-breather pipes. Presale, I always capture eBay sales page and sales photos which disappear after the sale, just for situations such as this. Upon more closely scrutinizing the photos I saved, I realized that the photos are of two different airboxes all mixed together representing one version! Frankly, I missed the differences, I was confused. They are supposed be a 1979 model airbox set as stated in the ad, but I received a 1975 version.

While I am somewhat irritated, I feel that it was an honest mistake on both our parts, mine and the vendors'. However there is a possible, cheaper solution than shipping back & forth for an additional $30, but requires info that perhaps others may be able to provide.

So, here's the question, --do the rubber part, carb port boots, crossover and the covers from a 1975 airbox fit or 'work' properly on an 1979 airbox?

5twins said:
Yes, under that little chrome disc is the clutch adjuster and worm gear. normally, we keep it packed full of grease so your "leakage" may just be oil that's separated from that grease because it's been sitting so long .....

On the inside of the cover, you'll find an arm attached to the worm and the clutch cable connects to that .....

Is there something unique or special regarding 'red grease'? I've seen that chemistry cited elsewhere, generally in association with powered machine tools such as vertical milling machines. Is it a specific grade or something akin that? Great photos, and you answered the question as well. Thank you.

Well, that Sta-Lube premium red grease is one of the thickest, highest melting point greases around. 3M from 650Central and VintageBrake recommends it for use on drum brake parts like the pivots and such. Along with that, I also like to use it in other high pressure spots like the worm gear, steering bearings, and swingarm bushings. Tubs as pictured aren't easy to find but you can get a grease gun tube of it right at Harbor Freight.

Update on the airbox story....

After much dialog back and forth between myself and the eBay vendor who shipped to me 1974/1975 airbox set...a pair of boxes, in lieu of the 1979 airbox pair set the ad stated and the included mix of photos of 1979 and 1975 airboxes. It was sold as a set, a pair of boxes. I explained in detailed the problem. Now the vendor is trying to get me to agree to one box instead of a Left and Right side mated pair, as though, he he dosen't understand English well? Or so it seems. I'm starting believe that the vendor is being tricky. The sale was sold as a complete set, and now I've discovered that the set the vendor shipped is missing a very difficult to locate component, the left side box has an insert, around which the crossover joint must slip over, apparently it is a pressure fitting. I can't find any information about the component. In the photos, the vendor positioned the boxes as though the part were present, yet upon, again, very closely zoomed scrutiny, one can see light passing through where the component should be and blocking light!

I had hoped that someone here might be able to answer the question regarding different date version cover interchangeability Well, FYI, they very likely are not interchangeable...eg., don't fit. The reason being, the 1974/1975 version boxes have a screw fastener one side and a stamped out, 0.5"/12,7mm long, bent up, at 90º flat tab which passes through a simple slit in the cover, whereas the 1978, 1979, etc, version airboxes also employ a screw fastener on one side, and a tab on the other side. But this tab is a seperate peice of metal, again appx 0.5"/12,7mm long, formed in a 'u' shape and is spot welded to the airbox, appx 1/2"/12,7mm down the side of the airbox. The 1975 and the 1979 tab positions are in different places, it'll either be too tight or too loose, depending on version mix. They gotta go back. I offered the vendor, to swap the two different sets, and I'd even pay half the shipping, presuming that it was honest mistake on both our parts.

I should have paid attention to the reviews, about 5% negatives, mainly not properly representing or sending wrong items..?

Someone welcomed me in the madhouse, now I understand the statement!!

throttle held open for compression
very early on do a head stud retorque.
after you do this, ride 50 miles, clean motor again then see if leaks have stopped.
Yes push rod seal and loose sprocket both are leak causes in the LH cover, it's usually super clean under there.