B_Crabaugh said:
Looking forward to it. I’m about to fire up my TCI motor for the first time this weekend and want to be prepared if something goes south. Thanks for the info!
Click to expand...

Nice! I'm sure you'll be fine, I think these twins are bullet proof if you set them up right. I would prefer an electronic ignition over points any day. This bike is just angry right now.

TwoManyXS1Bs said:
An improvement if the coil is weak or failing.
An improvement if it's fuel or oil fouling.
A mild decrease in power otherwise.
Too much fuel/oil fouling will eventually bridge the narrow gap.
It's just a diagnostic tool.
Return gaps to normal after fixing...
Click to expand...

10/4, that's about what I figured. Thanks. Whelp, I'll throw the original box back in tomorrow and see if I get spark again. Regardless I think a new coil plugs and wires are in order. I'll check back in and let y'all know if the box kicks off.

Sounds like a good idea. Your descriptions somewhat parallel my experiences earlier this year, when I had a coil go intermittent. Closing the plug gap got me home.

When the coil starts to go, one scenario is having the secondary arc over to the primary, sending momentary high voltages back down the primary feed. Not a problem with points, but *could* damage the output driver transistor of electronic ignitions. Severe enuff, that damage could wick it's way further back into the system. That's one reason that it's strongly recommended that you never leave a plug cap open to the air while testing dual-output coil systems...

TwoManyXS1Bs said:
When the coil starts to go, one scenario is having the secondary arc over to the primary, sending momentary high voltages back down the primary feed. Not a problem with points, but *could* damage the output driver transistor of electronic ignitions. Severe enuff, that damage could wick it's way further back into the system.
Click to expand...

Alright fellas.
I got the original box working again! Went through and reflowed the board, found a couple that bubbled out when hit again. Fixed the cap leg and used some gorilla glue epoxy to cement the black capictors. So I rode it the 3 miles to work today with the plugs gapped at .015....

-Roll in is smooth, still hesitates when you give her the whip.
-5th gear miss is still there but not as prominent as before, closing the gap helped that out a lot!
-She started to break up about a 1/4 mile from work in 3rd, going up a hill.

We're probably all on the same page here. With the gap closure advice from TwoManyXS1B's, and a return to a baseline with the original black box. I feel pretty confident that the coil is seeing an intermittent failure, due to a bad winding or heat soak. I'll get coils situated and hopefully that will clean it up. If it does then I'll swap the replacement box in and see if it clears that one up as well.

P.S.
Side note: I just ran to the store and it died on me again, no lights. I had to cycle the key to get my lights back, and she fired right up. I have an O'Reillys car ignition on this thing and I'm starting to think it might just be vibrating it's self off? I have it wired power out from Bat to 20 amp fuse, then Y to rectifier and ignition. There's nothin else on the battery side of the ignition and everything is soldered in and shrink wrapped. She ain't blowin fuses so the dieing issue might be the key? Don't know what else would kill the whole bike like that.

Yeah, could be chasing more than one problem.
The fuse should be the first out of the battery.
Then, from the fuse to the ignition switch.

If the coil is indeed suspect, would avoid running it until it's replaced, to save the TCI.

Is this some of your work? 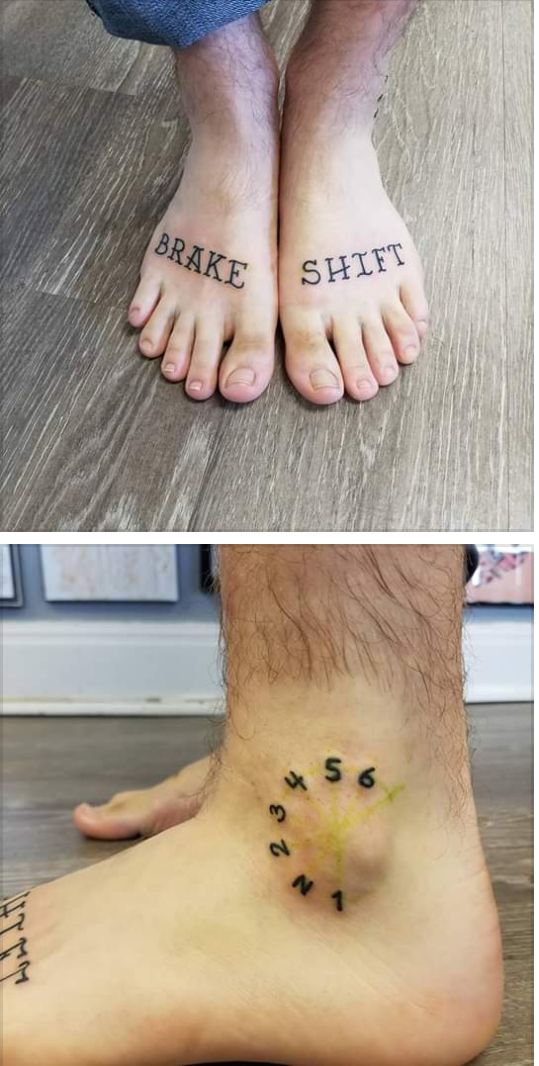 Hey, what do ya know! Yessir, that's some of my handy work. One of my buddies is a gearhead too and brought me that idea. Honestly wish I would have thought of that one first ha ha!

Copy that on the coil, got her parked until I can get one ordered.
This is how I have it wired between the battery and ignition... 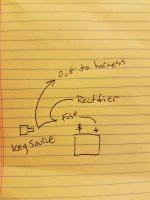 The bike has been a little monster ha ha. Figured It would be a quick carb flush and I would be riding all over the place, boy was I wrong!

Yeah, that wiring looks fine.
Fingers crossed on the coil...

TwoManyXS1Bs said:
I couldn't tell you what purpose C2 serves in this circuit...
Click to expand...

At first glance it's a little zener regulated DC source but you immediately see C2 blocks DC. Next it looks like an artificial split rail for an opamp, where you split the difference between VCC and ground and treat it as ground so you can have a negative voltage swing. Next you realize there's no way to know what it is without knowing what's going on in the infamous Hitachi HA1825 chip... Another guy drew up with a schematic about a decade ago that I don't want to post, but it's the same right in that area.

Yeah, I thought that maybe the schematic was drawn wrong, but double-checked it to the circuit board. With R3/C2 in series, there'll be 1-2 millisecond delay to the IC's pin 1. Maybe to monitor power-up or power-down, but that's a goofy way to do that...

Yes. It could be a randomly largish delay, like for power up and settling for example. The electrolytic has too large a tolerance for any precision timing. It has always struck me as very weird there's no data sheet for that chip to be had. I think it's apparent the TCI was designed by some kind of wizard so if anything looks weird it's most likely misunderstanding it on this end.

I installed a Honda MP08 coil and some Accel plug wires I had laying around. It cleared up the dieing and spark cut issue I was having, but it hasn't fixed the hesitation completely. I did find the idle air screws didn't have o rings and were pulling air. Fixed those and rechecked for vacuum leaks and there are none now. This cut the hesitation way down, I would describe it as a flutter now.

I still get an occasional pop or flutter if the throttle is 1/8 open at cruise, 2nd-5th gear (5th gear being the worse at highway speeds) . It won't do it during WOT.

At this point I suspect something in the idle circuit before it overlaps the main. It either needs new/bigger idle jets to start with, or there is some crystallization in the circuit somewhere. It has the original 45 idle jets (one looks a little pitted on the cone end) and I swapped the mains up to 130's and it did clean up some of the hesitation. So it's been several different issues between ignition and fuel.

I figure I will double check the tank and make sure the coating hasn't let loose. Then get some jets ordered and go from there. Do you guys just run some wire through that emulsion tube then back flush with carb cleaner? I think if I still have crap in the carb it's probably in that neighborhood.

Thanks again for all the help gentlemen.

Shew that was a read and to me sounds like multiple issues and headaches. If it were me I would completely check the wires specifically the brown wire that travels through the ignition. However; I would also say your carbs may not be adjusted / tuned correctly so your probably chasing your tail. A carb rebuilt may help some of the issues, but since your running without real filters you may need to hone your jetting skills. And one more thing that I feel is worth the money to help second guessing on carb tuning is a gunson colortune; even though I am sure someone may disagree.
Last edited: Aug 1, 2019

Texas XS said:
... I installed a Honda MP08 coil and some Accel plug wires I had laying around. It cleared up the dieing and spark cut issue I was having, but it hasn't fixed the hesitation completely...
Click to expand...

Did you reset the plug gaps to normal?

Wow. I've not heard a mention of the color tune since the Apollo era. Didn't know they still made them.

Team Junk said:
Wow. I've not heard a mention of the color tune since the Apollo era. Didn't know they still made them.
Click to expand...

I wasn't alive in Apollo era, but hey the slinky is still cool right? Nothing replaces Butt dyno for sure. I just know its frustrating when both your ignition and carbs are making you pull your hair out because your chasing both.

Team Junk said:
Wow. I've not heard a mention of the color tune since the Apollo era. Didn't know they still made them.
Click to expand...

Way back in the sixties (I was about 6 LOL) I remember an Isetta stopping across the street from my house, a rather large door to door salesman got out of the front of the car!. I was spellbound, never saw such a thing. Watching the suspension sag when he got back in was special too.

TwoManyXS1Bs said:
Did you reset the plug gaps to normal
Click to expand...

Ok, I moved the clip all the way down on the needle and the hesitation up top dissapeared, it was isolated to the bottom 1/8th to 1/4 of the throttle. I ordered the next three bigger mains over 130, and and two pilots up from 45. I'm back to the third clip needle position with 135 mains but haven't had a day off to fine tune. I think it still needs at least one up on the pilot circuit and possibly the main as well, depends on how much these pods lean it back out.

So yeah a bit of progress! Feels good to have an avenue finally opening up.

Building a Type "B" Regulator Rectifier from scratch 1981 XS 650