Mikey said:
You know I once thought highly of him but now I'm just plain shameful of the way he treats his employees and others around him
Your head just gets to big and your skull can't contain the stupidity inside
Sad very sad
Click to expand...

Same here. Self made, electric cars... rockets.... what's not to admire?
Twitter was a way for him to inject "his" version of free speech into politics. By all accounts, "his" version follows a one way street.
Naïvely blinded by his own vision.... high on himself? Dunno.
All I know is when you treat employees like dirt... a commodity to be used (up) and abused, you're part of the problem... not the savior of humanity he apparently thinks he is.

One day this world will face an end of humanity event. Nukes... asteroids... who knows what or when. If we're not habiting another planet... like his vision for Mars, humanity will cease... the end.
He had a vision once. Apparently his eye's off the ball.
Yeah Mikey... very sad.

In the vein of life imitating art; an Ian Fleming "Bond Villain" – they always were uber wealthy, genius sociopaths. I don't know if this instance will follow the script.

I stand with CBS News and am getting off Twitter. The next thing you know they'll be letting right wing extemists back on like Jordan Peterson! Heck, they might even let Project Veritas back on! I won't have it!
Oh crap...

The culture of companies in Silicon Valley is bizarre. They are competing with each other for the best and brightest from everywhere in the world. The employees make $100,000 and have perks like recreation areas you wouldn't dream of. In return they work 12+ hours a day.

You are liable to read criticism of Musk that his employees have to work 12+ hours a day....

What you're seeing in the media is a replay of Chuck Schumer's warning about the "6 ways from Sunday" retaliation for bucking the system.

If you don't believe, then chew on this -- while CBS is telling you twitter is going down the drain because all the employees are quitting, what they don't tell you is there are and always has been 500+ applications for every opening. Then ask yourself if you're getting the truth.

I read somewhere, a few months back, that the management was considering cutting part of their workforce to streamline the company before Musk came along. For the owners, taking his money and letting him trim the dead wood worked out good for them. 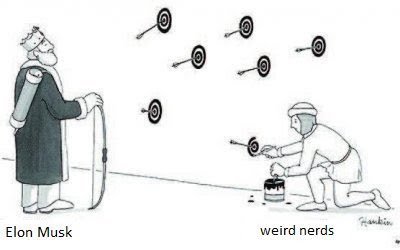 He started to loose me when he sent a rocket, with one of his cars on top, to drift around in space as a momument to himself.

mike in idaho said:
I read somewhere, a few months back, that the management was considering cutting part of their workforce to streamline the company before Musk came along. For the owners, taking his money and letting him trim the dead wood worked out good for them.
Click to expand...

Nothing wrong with streamlining to make some part more efficient. It's how that will affect quality of service. 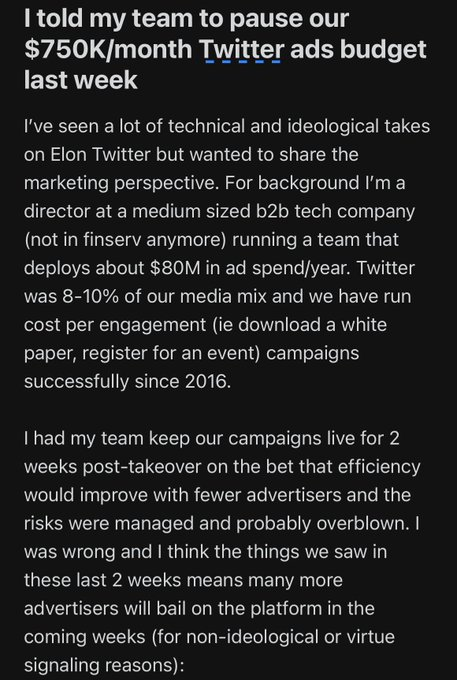 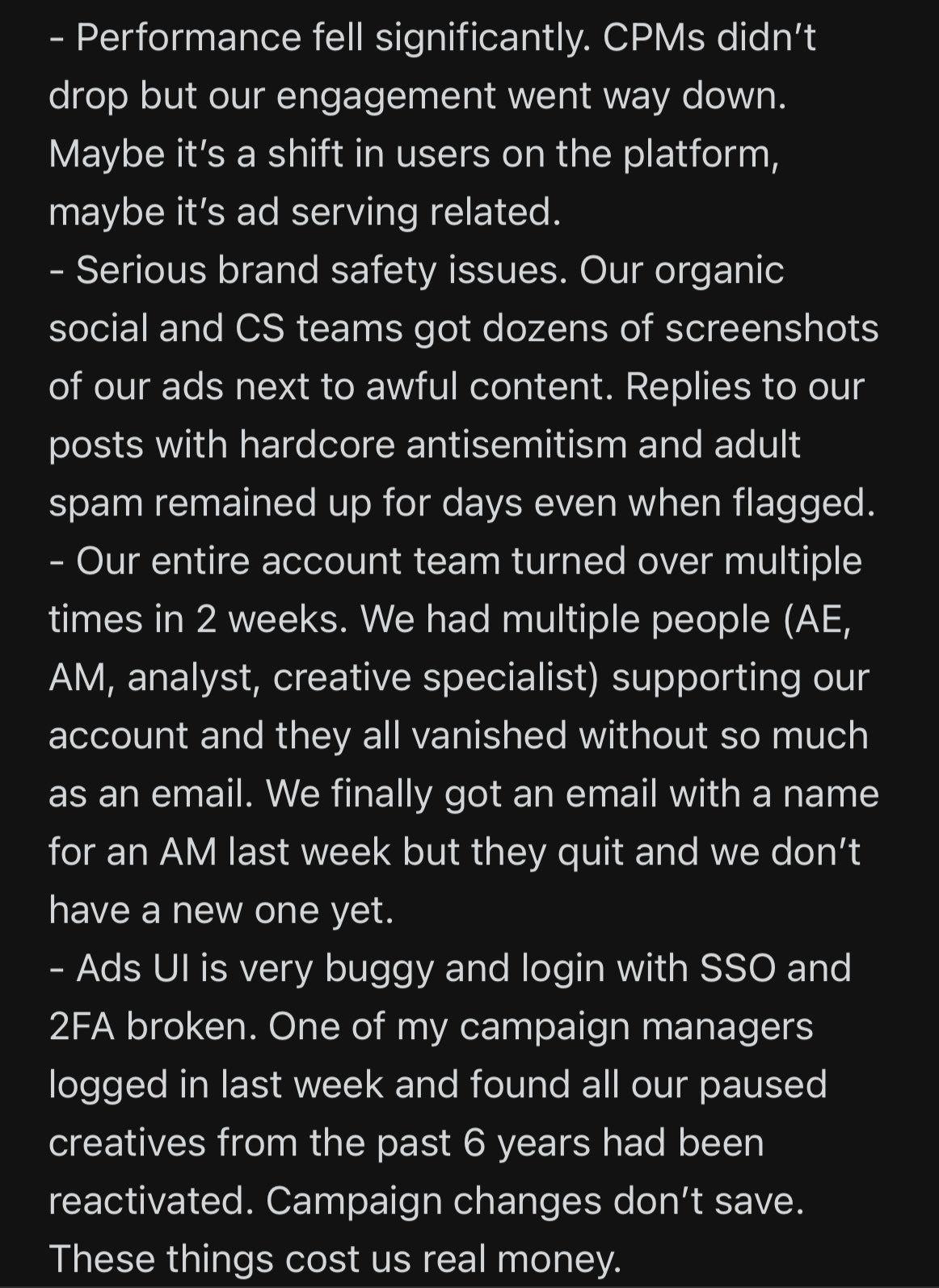 Nothing wrong with streamlining to make some part more efficient. It's how that will affect quality of service.

I rarely seen that succeed here .. Streamlining means cost cutting -- and ---that have consequences
Cost cutting means the salary developments is under question.
The talented people always have possibilities to change job.
Many even has a standing offer -- " Call me we talk about it "
or have friends putting in a word for them. They can get the new job the same day. More or less.

So come the yearly wage adjustment The Pencil pusher Bean Counters .Who Usually don't know the first thing about who does what and how good he is especially not in High Tech situations.
Ends up coming up with a zero to exactly those he should not do it to.
It can be different in the US .and was different here .long ago :The Boss could set it salary more freely.

Some jobs take a year before one is starting to produce knowing how to interact cooperate. Knowing the product.
So the Zero salary adjustment streamlining are provoking less efficiency ...people looking for the exit
Sitting with their feet on the desk .Looking for the next job. He is not gonna perform on top because in his mind he is already out.
Even in Construction it was so ...Boss giving an employee a scolding the answer
" You can take this God****m S*hit Yourself " turning his back and started to leave .
But was called back and cooler heads prevailed .Started over again.

Some people are laid off and are not there
Some are looking for next job
PROBLEM how uphold customer service .. The saying business is personal The customer can say I want to talk to Mr Smith ..he knows what I Need
answer He is fired .. But we have Miss BongoBango who is new here. She will help you.
Most cases she is new at the job lower wage and the Customer service is gone.
Perhaps Mr Smith is at the Competition .Then the customer can follow ..

Customers leaves ..New firings necessary -Less service in the rush to the bottom ..and eventually closing .

I do know of one case the turnaround did happen just one .. Most cases the downsizing is a sure tell
This is soon over.
But I know to little about this .But very few stay on top for a long time

On the other hand new owner new rules .. Firing is nothing strange.

There's a cartoon that's the best cartoon ever thought up and put on paper. It's a guy whose job is digging ditches muttering to himself how stupid J.P. Morgan is.

xjwmx said:
If your favorite backyard astronomer quits because the world can hear all sides on a news story now, somebody probably better will be along to replace him.
Click to expand...

Maybe a little off-topic, but I had to share the following: 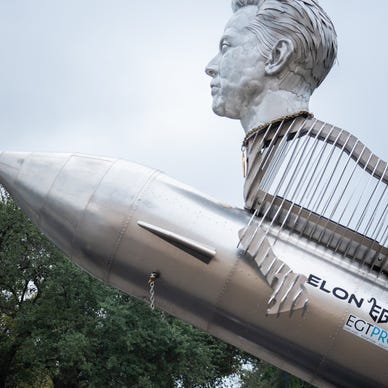 There is a giant sculpture of Elon Musk's face — on the body of a goat, riding on a rocket — being driven around the Austin area.
https://www.statesman.com/story/bus...on-musk-goat-statue-what-we-know/69667426007/

DogBunny said:
Maybe a little off-topic, but I had to share the following:

View attachment 230536
There is a giant sculpture of Elon Musk's face — on the body of a goat, riding on a rocket — being driven around the Austin area.
https://www.statesman.com/story/bus...on-musk-goat-statue-what-we-know/69667426007/
Click to expand...

Except you "made that shit up"...
That's what you can't make up

xjwmx said:
Except you "made that shit up"...
That's what you can't make up
Click to expand...

The website says that the founders "believe that Elon’s potential acceptance of this biblical-sized gift could catapult $EGT (the symbol for the accompanying cryptocurrency) into the limelight and accelerate its various initiatives." Their words.

The "biblical sized gift" can be classified as a "monument".... of biblical proportions. Odd they would choose the word "biblical".... no?

Split hairs all you want, my title's at least as accurate as the one the AAS wrote.

Captain Americas Easy Rider Bike up for Auction. Or is it....