Got a bit of a dilemma here. First off, I've decided to replace both outer crank and all the tranny bearings. After cleaning 'em real good, some still have a bit of "notchiness" to 'em. The only one that feels about perfect is the ball one on the output shaft... so I'm gonna let that one slide. All others are gettin' replaced.

So anyway.... the ball on the right side of the countershaft, right next to the clutch basket is a little perplexing. The book calls for a 6304Z. It's a deep groove ball with shields (seals) on both sides. Except the pics in the book show only the outer seal installed, the inside (to the gears) is open. 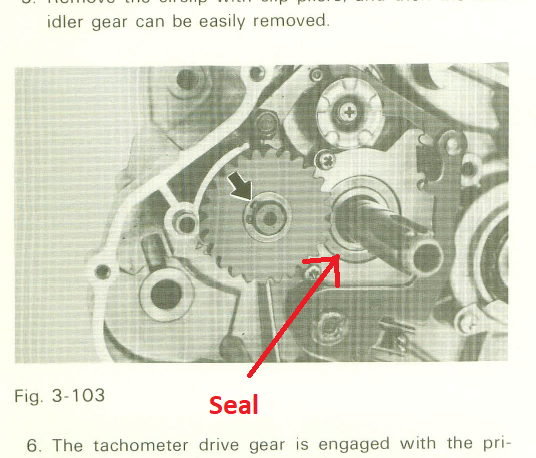 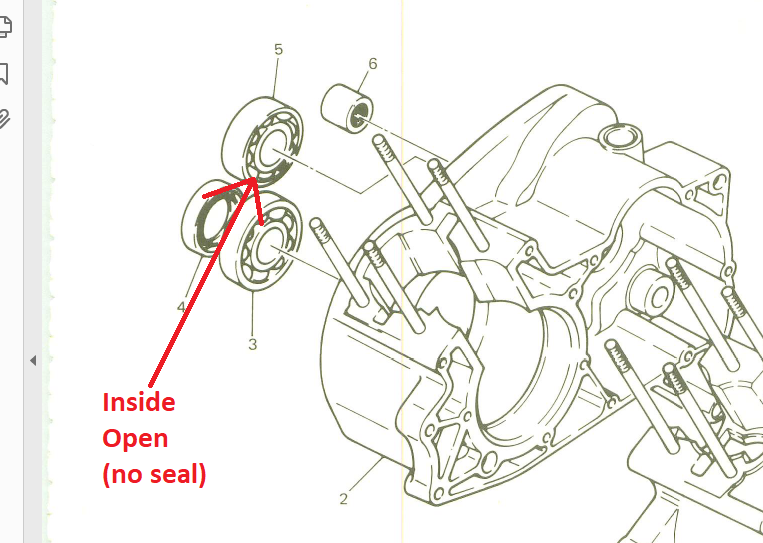 And that's what I have, a 6304 with only the outer seal.
The dilemma? Well, there's also a plate on the outside of the seal with a "scoop" pressed into it. Almost a funnel type affair that looks like it's supposed to catch oil that's flung around and feed it to the bearing. Keep in mind that this is a "splash type" non-pressurized oil system. No pump in other words. Your typical 2-stroke tranny. So the scoop plate makes sense... except it's feeding the oil splash to a seal. Confused? Yeah, me too.

Here's the bearing and the splash plate. 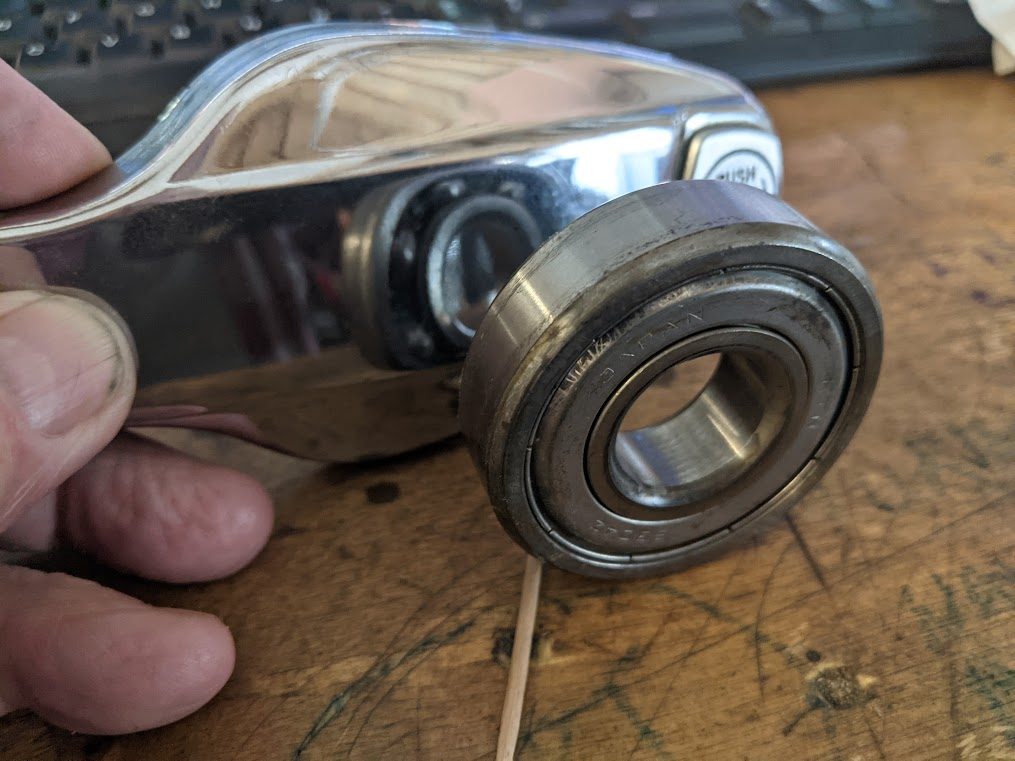 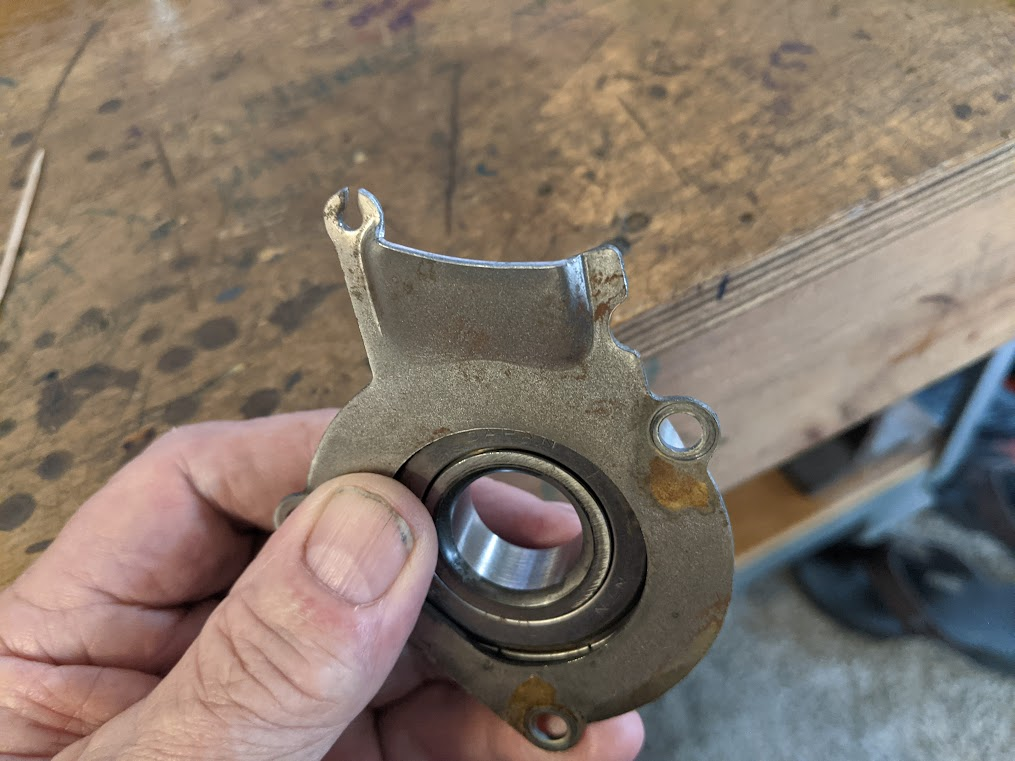 Now, here's the replacement bearing. OEM from Ebay at 15 bucks. It's what's called for in the IPC, except it's sealed on both sides. 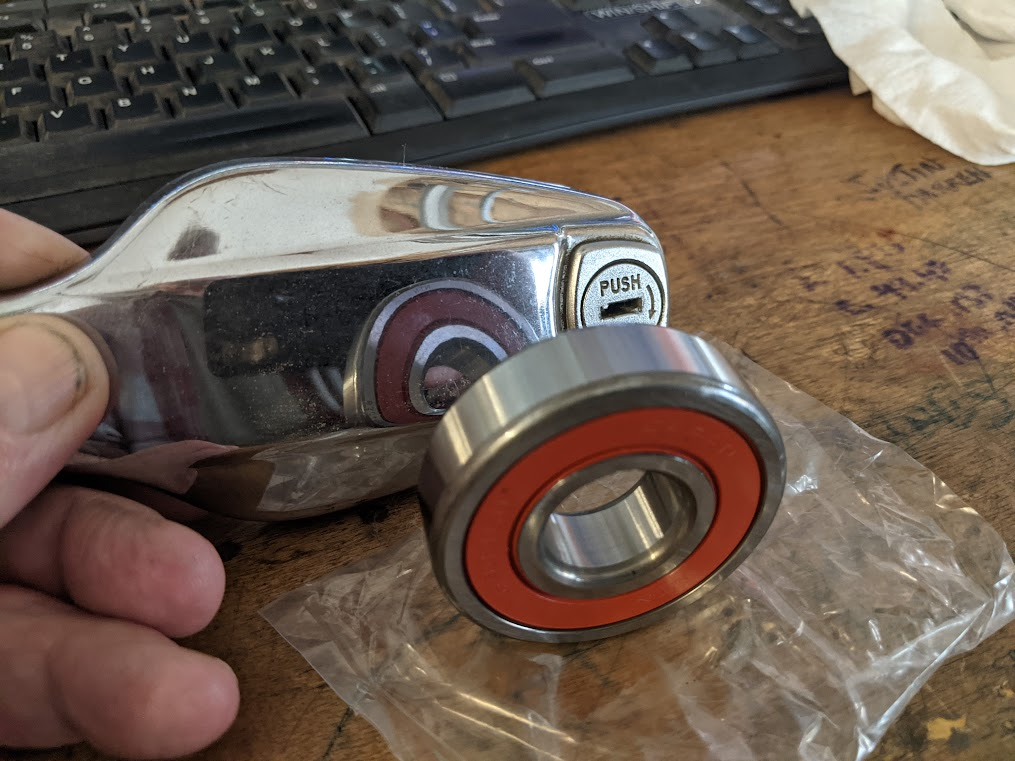 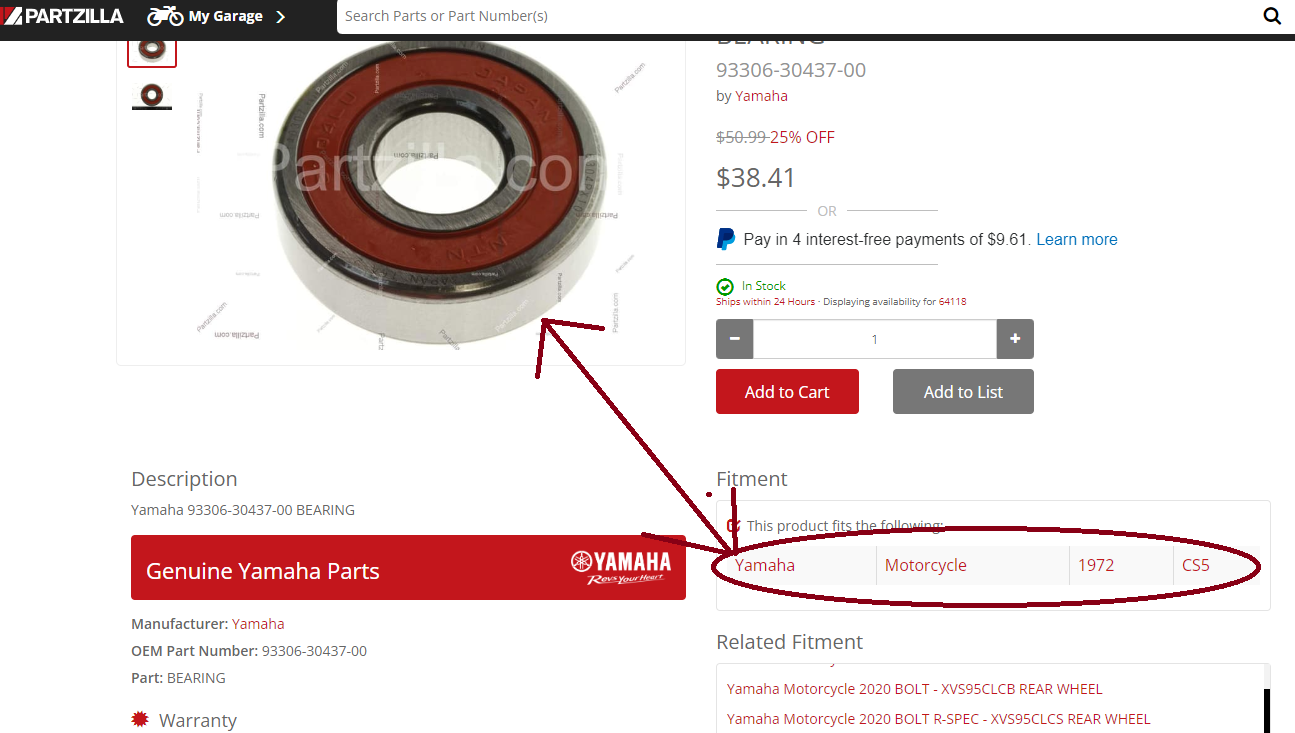 Do I run it as is, with both sides sealed?
Remove the inner seal?
Remove both?

Balls don't need or like alot of oil but they need some. I would think remove the inner seal so excess oil can get out. These are spinning much faster than a sealed wheel bearing so I imagine they need some fresh cooling lube.
Edit 33 minutes later-I am assuming the bearing exists below the at rest oil level.
Last edited: Friday at 3:40 PM

Yeah, I'll prolly put it back like it was (inner removed). It's just a little perplexing to me why they went to the trouble of putting a plate with a "scoop" stamped into it then put a seal there. It just looks and feels counterintuitive and counterproductive.

I think the scoop is there for clearance for the shift linkage.

Isn’t there a little spring that attracted to that cut hole on the top left of your pic??

Maybe they thought if the scoop wasn’t there it would be too weak?

This is all off memory (it’s going haha) I could be way off here.

Yep - 2cents - the 6403Z gets superseded to a 6403LU that is single side sealed as well. Me thinks the source "misinterpreted" and perhaps thought 2 seals better. I think most vertical split 2-strokes are similar. Theory, perhaps engineered to reduce turbulence and foaming on oils of the day?? Seems I recall later stuff running a mainshaft bearing open both sides. How is your DT set-up?

Yes, one of the linkage springs attaches to it, but the "scoop" really isn't shaped for strength... although it will add some. And if anything, it forces the linkage closer to the clutch basket... less clearance.

Tricky, the best I can offer is to ask on the UK based Air cooled RD forum they have a section for bikes under 200cc.
https://www.aircooledrdclub.com/
The RD 350 has a similar oil catcher arrangement directing oil back from the clutch area to the gearbox.

On the original bearing is that a seal or just a shield to keep big chips out of it?
https://www.bearingworks.com/technical-data/seals-and-shields.php

This is a 6304LU... double sided seal packaged in OEM box with the correct Yamaha part number per Partzilla and Parts Shark. 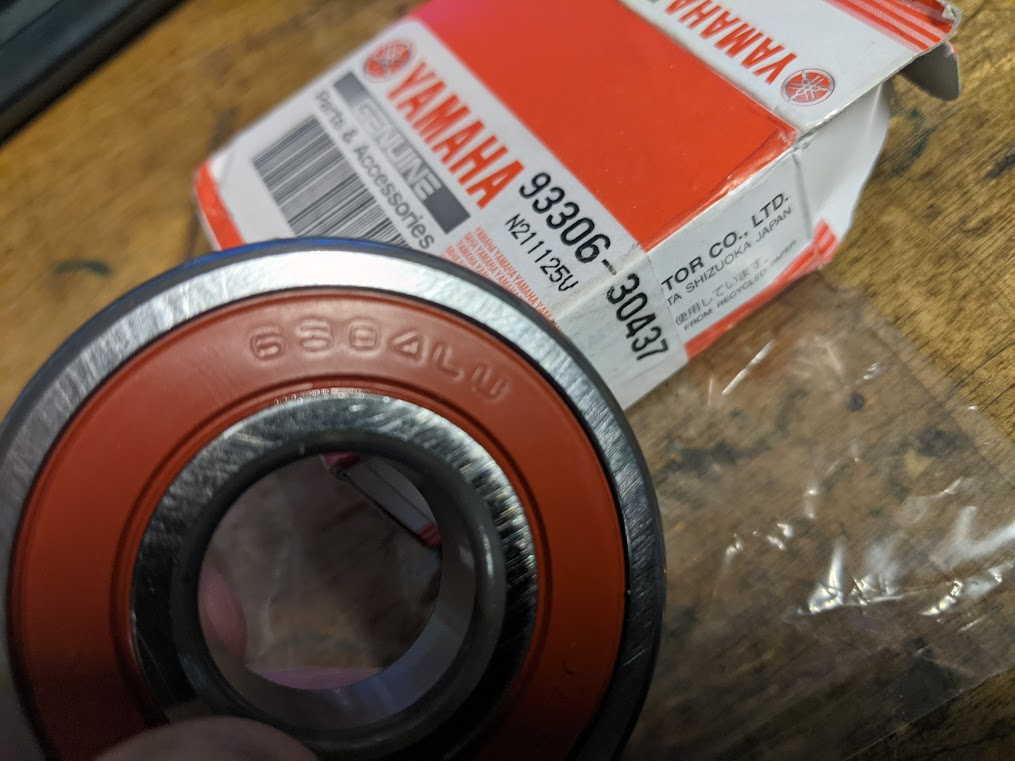 kshansen said:
On the original bearing is that a seal or just a shield to keep big chips out of it?
https://www.bearingworks.com/technical-data/seals-and-shields.php
Click to expand...

I was curious about that myself Ken. Yes, per your website it's a "shield" and not a seal.
So that goes along with my thought that the plate is in fact a scoop or funnel. The shield would let oil in through the gap between it and the inner race. Since it's a small (.005") gap, the scoop allows oil to pool there to help with lubrication.

So, common sense would tell you they didn't make different races for different types of shields/seal.... they'd design a common race for all the different shield/seals used.
Used a screwdriver in a vise to gently tap the shield off the old bearing. Used a pocket knife to remove the seals from the new and a few blocks of aluminum in the vise to press the shield into the new bearing.
Gotta love a good plan. 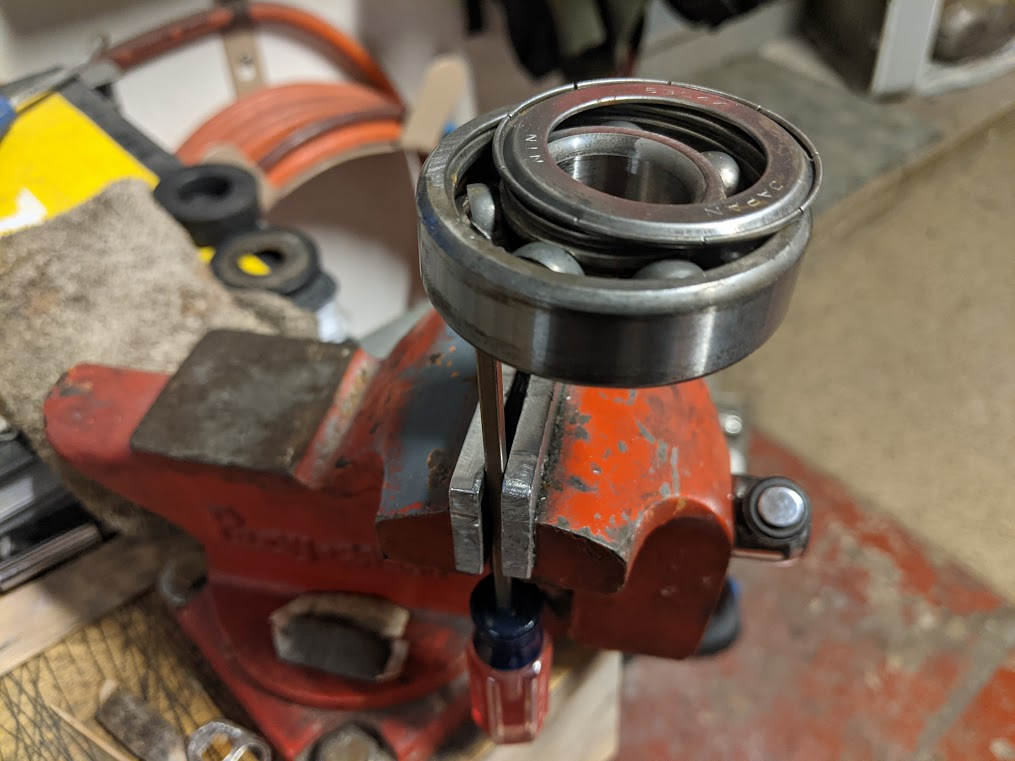 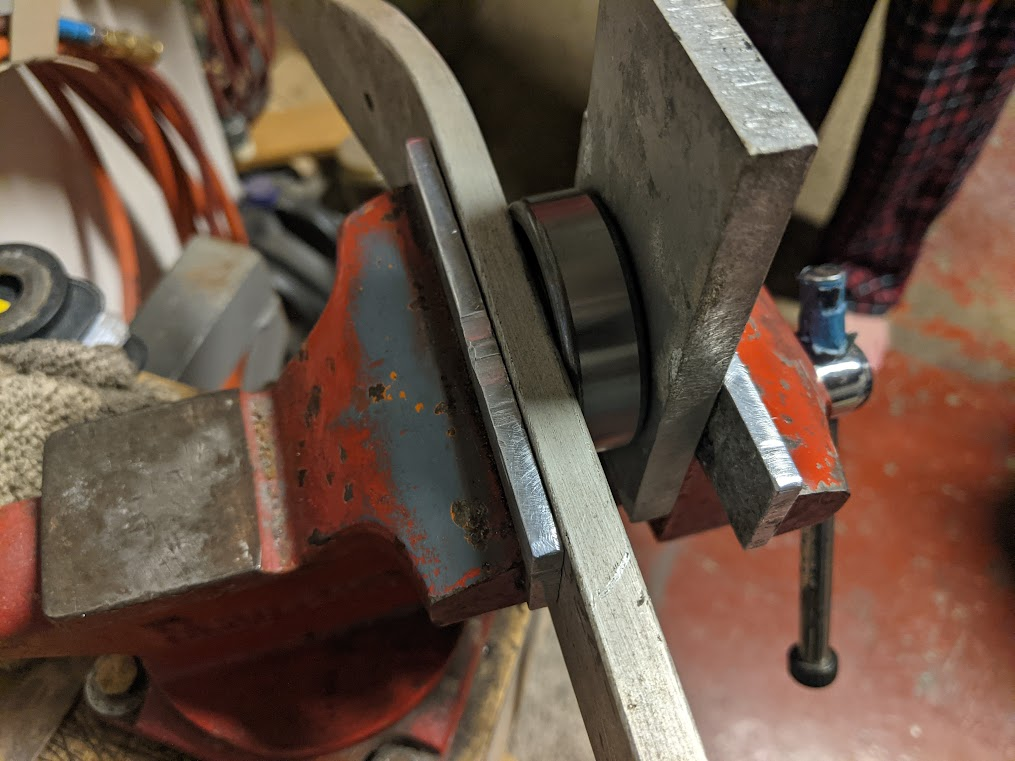 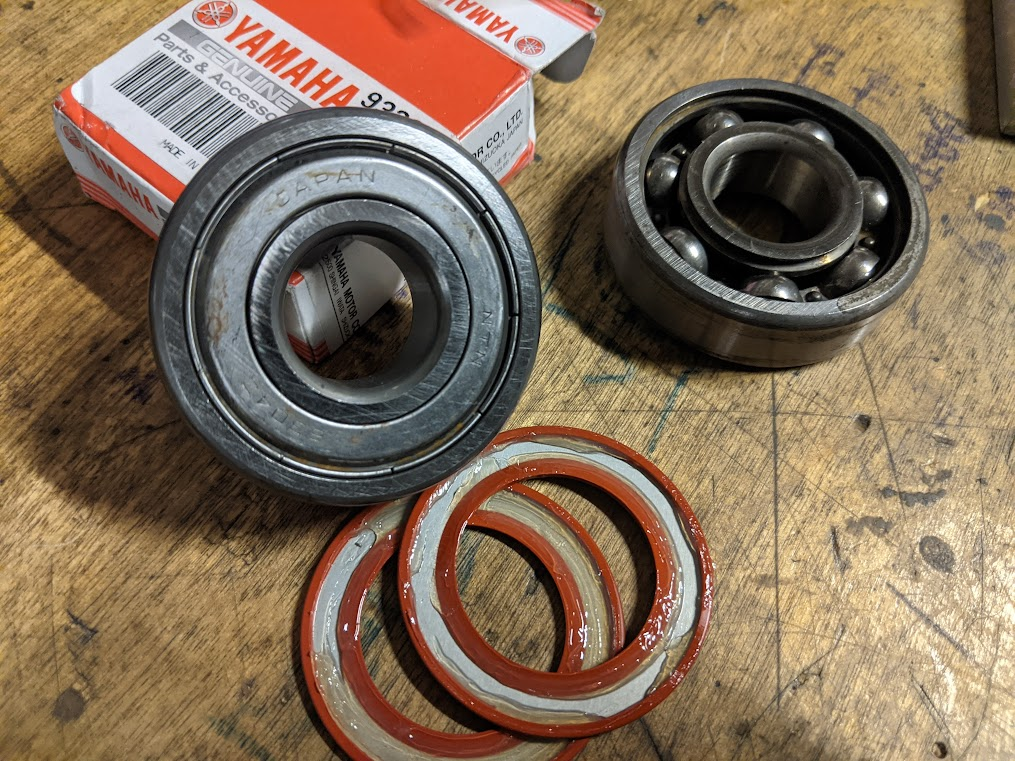 FWIW, a search yielded nothing. I asked the question on the aircooledrdclub.com forum - we'll see.

Another FWIW - cmsnl.com let me add the old p/n (NTN in stock) to my cart even though they show it superseded - that doesn't usually work that way

I was wondering if that might be a possibility!

I know I often got sealed or shielded bearings when ordering by dimensions and if the application called for open bearing I'd just pop the seals/shields out.

Carl, my brief time with a lovely much understood dog